The mountains have done their damage and the GC riders now take a deep breath ahead of the timetrial on stage 20. Meanwhile we see one last chance for a Sprinters vs. Breakaway battle.

Share All sharing options for: Le Tour Stage 19: Sprinting through the Dordogne

After Alps and Pyrénées it's a tired peloton that have two more roadstages and a timetrial to get done. It looks like all the big sprinters have made it through the last week in one piece so those teams could be hungry for their last two chances. In Paris they will be assured of a sprint more or less but on the stage to Bergerac they will be put to a harder test. 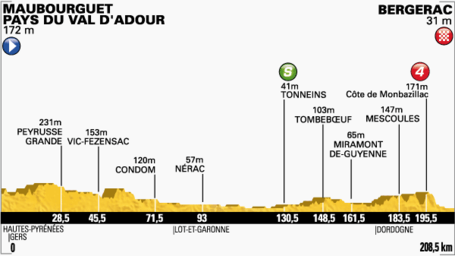 Very little altitude but the nasty organizers have done their bit to make things complicated by throwing in some lumpy terrain right at the point when the sprint teams try to get things organized. Bear in mind here though that there a thirteen teams here, thirteen, who have yet to score a stagewin in this Tour so the pressure to get in that breakaway and make it stick is going to be enormous. Yes some of those teams are in the running for respectable overall positions and Cannondale have a green jersey to celebrate even if they don't win one of the last stages but this looks like a TdF where a lot of teams will walk away emptyhanded, and we're not just talking about little wildcard teams either.

Apart from a fierce fight for a stagewin today should be a good day for castle-afficionados too as the peloton passes through one of the most beautiful parts of France.

My pick to win: John Degenkolb

Betting against Europcar today seems almost silly because it's hard to imagining them not being all over the breakaway today to take the one last chance to get a stage but I somehow have the feeling the course isn't challenging enough to dissuade the sprint teams. So who is freshest might be the issue here. Giant-Shimano misfired last time they had the opportunity, don't see it happening twice.