German lock-maker has a lot of bases covered

Share All sharing options for: Techs-Mechs: ABUS Locks Fear Out, Flexibility In

When the U-lock showed up for good in the 1980s, it was a triumph of modern design... and for a little while, of bike security. In time, stories began showing up not merely of U-locks being misused (e.g., locking the front wheel so the entire rest of the bike can be stolen; locking to a short pole, etc), but of the technology itself being destroyed. The solid steel loop may have been more resistant to thieves and their bolt-cutters than the old coil locks, but bigger bolt cutters, car jacks, and even liquid nitrogen came on scene as ways to foil your old Kryptonite. The game of cops-and-robbers continues, as I suppose it always will.

Still, the expansion of ABUS -- August Bremicker und Sohne -- a German lock-maker dating back to 1924, is at the very least an indication that the cops have moved into the lead for a little while. And made a lock tailored to an awful lot of different security needs in the process.

Let's start with security. Leverage attacks, which I gather involve generating enough force to pop the locking mechanism, have been outwitted by an ABUS staple: the centrally-located key lock that activates two high-security devices. Back in the day, U-locks had one bolting shackle and one curl on the end of the bar. Thieves figured out a way to pop the lock. Maybe there's a way to pop two shackles, but for now it's far harder. Then there's the tempered steel loop, harder and more resistant to cutting than ever before. An outer coating makes it resistant to corrosion, preserving that advantage as long as possible. The key assembly has more little pieces (technical term) that make the lock harder to pick than one with fewer... pieces.

Yes, other companies have picked up on these technologies too, and don't ask me who invented them. All I can tell you is that ABUS has the whole package working. I can't tell you that thieves were literally deterred when I've left my bike in front of the store. The basic facts about lock security are well established and ABUS' approach to security passes muster on all levels.

But it's in the lineup that things get interesting. ABUS makes locks on a security scale of 1-15, makes them in chains and padlocks, cables, U-locks, frame locks, and the truly unique folding BORDO series. I tested several locks across the spectrum and offer the following to help you focus on what fits your needs. The variables include size, weight, shape, packability, and security rating. 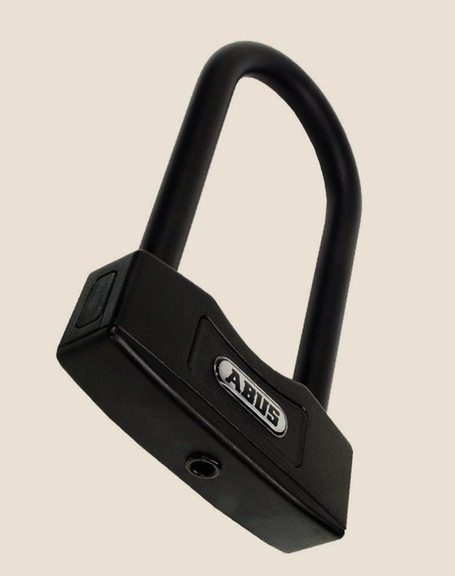 In my bag, for the last year, I have been carrying around the Granit Futura Mini ($90), a U-lock that comes in a six-inch loop size just big enough to grab the center tube and rear wheel. Weighing a mere 726 grams (1.6 pounds), this model brings all of the security to the device itself (rating: 11 out of 15), and a few other features I love: the key which fits regardless of which way you insert it, which turns as smoothly as a bank safe, and which comes with a little blue light adequate to find the key entry. It's light-weight, under three pounds, and fits in a small sleeve of my commuter bag. For all those jeans with loops for your U-lock? Here's one that won't drive you crazy when you actually use that function. But I usually have low security needs, such that locking the frame and rear wheel are enough. If you need more security (e.g. removing the front wheel and lining up all three points), then you need something bigger. This doesn't fit much in the loop, and smaller is easier to leverage (assuming leveraging is still possible). 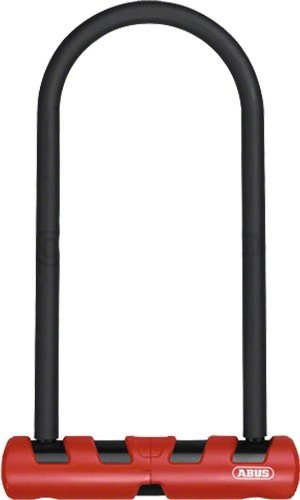 Next, I tried out the Ultimate 420 ($65), another U-lock with all the same features (great key entry, blue light, double-shackle bolt, etc.) except for a larger loop. The nine-inch loop covers the two problems I just mentioned, fitting more of your bike in the loop and making leverage break-ins harder. It's also bulkier and heavier, though it comes with a frame attachment like U-locks have since the early days. To me, it's still plenty easy to carry around, and is probably the lock that appeals to the widest variety of people. The security rating is 10 out of 15. [ABUS calls anything from 10-15 "maximum security".] Great, standard-ish lock updated to feel modern and strong. 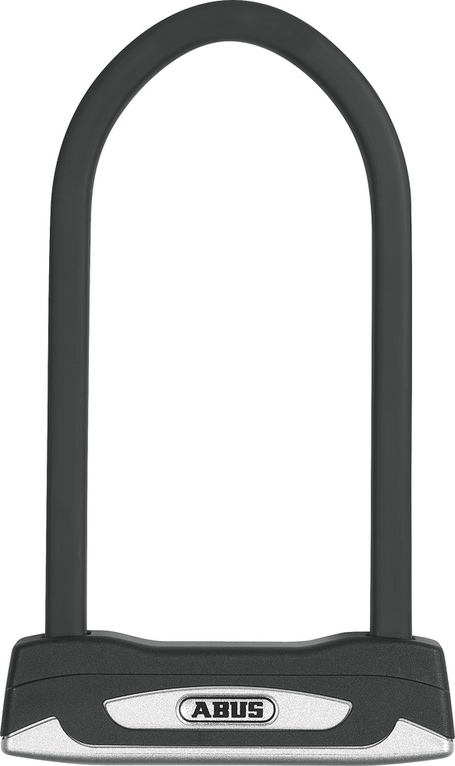 Last in the U-lock category is the Granit X-Plus 540 ($160), the ABUS bike lock that carries the highest security rating, 15 out of 15. It's huge, a full 12 inches in the loop. Otherwise resembling the other U-locks in concept and features (double bolts, great key entry, etc.), It's heavier (3.2 - 3.9 pounds) and bulkier than any U-lock I've known. Not what I would prefer to be lugging around casually, on the off-chance I need to lock up my bike. But it's absolutely ideal for several uses. Are you riding with your family? This sucker will grab at least two bikes, and maybe with a cable for the kids' wheels you would be all set. Do you park regularly in a sketchy spot? Leave the Granit X-Plus there and give thieves little hope of ever getting your bike. A good friend of mine recently discovered a little theft ring involving grabbing bikes from people's back-yard sheds. Throw the Granit X-Plus 540 on your bike back in the shed and don't worry about it disappearing, no matter how long you leave it there. This lock would be good for motorized stuff too, I'd wager.

Detouring out of the U-lock series, ABUS have invented the truly unique BORDO series ($85 and up), which uses flat steel pieces riveted together that can fold down like an old wooden ruler. If your security needs aren't too great, this is actually the lock you want.

The knock on the security (where it scores an 8 out of 15, still considered by ABUS to be "extra security") is related to those rivets, mostly. There is only one bolting shackle, but its shape-shifting style places less emphasis here. If anything were to give, it would likely be a rivet. Moving parts are where thieves attack, and this has one at each end of each steel slab. The slabs are tempered and cutter-resistant, the rivets are on their second generation and are mighty as can be, for better or worse. Oh, and apparently thieves are creatures of habit, needing to move quickly before attracting attention, so if the BORDO hasn't penetrated your local lock market too deeply, chances are pretty good they won't have a plan of attack if they don't know what it is.

Me, I commute across affluent neighborhoods (mostly) to my indoor parking space. I make stops along the way, usually at relatively tame places where I can see my bike. I'm guilty of not locking, fairly often, because it's hard to imagine a thief being anywhere nearby. Stupid, I know. Anyway, the point isn't that you should be like me, the point is that I am the perfect customer for the BORDO. The shifting shapes from the folding out design mean that I can spread the lock out into a loop and fit both wheels and frame to a rack. Or grab my bike and DS Little Bear's, and my rear wheel to boot. I can fit it around my deep-section rims (55mm) with no trouble. And when it's go time, I can fold it and fit it in any pocket. For people in this category, it's genius. Lightweight (2.2-2.7 pounds) and small enough to get lost at the bottom of my bag, it also comes with a rubber pouch which you can strap to your top tube. This is the most clever lock I know of, and while it won't work for everyone, it's completely up my alley.

Check out their entire line, this is actually just two of the ten bike security categories at their site. There are about a hundred variations. Your chances of finding one in your specs are pretty good.