Saturday marks an unusual moment in the 2014 Tour de France, where the race conducts a bizarre experiment on the peloton by having them ride a "time trial," which is their term for an event where riders start one at a time, minutes apart from each other, rather than in a bunch and have their time measured individually for purposes of both the stage and the general classification. It gets weirder: there are rules against drafting! And riders will be permitted to use weird equipment, like triathlon bars and abnormally tight, shiny "skinsuits." And they complain about the Desgranges years...

OK, I exaggerate, but it's hard to recall an edition of the Tour de France that placed less emphasis on the Race of Truth than this one. Not one single meter of this race has been done in the cronometro format, before tomorrow. No prologue, no early flat ITT, no mountain time trial, nada. Rien. Bubkis.

Even tomorrow's time trial isn't exactly a traditional version. Very little is flat, meaning that the usual crono suspects might not rise to the top. Take a look: 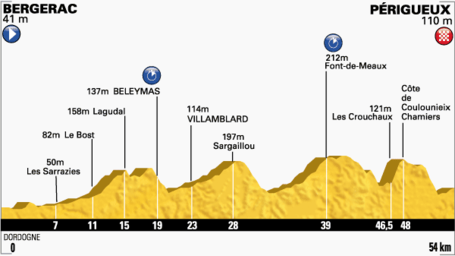 Four long risers of some consequence will challenge the stage contenders to maximize their climbing ability on this course. My suspicion is that none but the last is steep enough to force teams to contemplate ditching their aero bikes for traditional setups, but we'll see about that. Descending, too, will be a necessary skill, not unlike pretty much every stage of this Tour. And they wonder why Nibali is winning.

For their dismissive approach to time trials, the race has been rewarded with an event where the two biggest headlines are already written. Vincenzo Nibali will be unchallenged in his stranglehold on the maillot jaune, with more than seven minutes over his closest competition. My guess is, given who's chasing him and Nibali's own relative competence in the discipline, his lead will actually grow. Also, there's not likely to be any real challenge for the stage win, with World Champion Tony Martin of OPQS looking fit and previously dominating the discipline like never before.

But there is an incredibly tense battle for the two remaining podium positions, with FDJ's Thibault Pinot, AG2R's J.C. Peraud and Movistar's Alejandro Valverde all within 15 seconds of each other on GC -- a nonexistent amount of time over a 54km course. Peraud is a second-rate cronoman, recently taking fourth in the French championships on a 48km course, and rates as the favorite for one of the two unoccupied steps in Paris as a result. So too is Valverde, who is the Spanish champion, FWIW, and excels on courses with some climbing involved. That leaves the self-described "hopeful" Pinot as a likely odd man out... but Pinot has been strong, and this is the race of truth. So we shall see.