Sunday is going to be the traditional end of the Tour celebrations on the Champs Élysées but this year there is double reason to celebrate. Before the men arrive in Paris the best women riders in the world will contest La Course on the same circuit that the men will ride a few hours later. This will be an un-official sprinters championships and all the bigs are here.

Share All sharing options for: La Course is here

The fight to get a women's Tour de France back is perhaps moving forward after ASO have taken the small first step by initiating La Course by Le Tour de France. No doubt this will be a barometer to gage interest in women's racing. It will be a limited experiment of course with a shorter criterium for the sprinters mostly but it will still be a huge stage for the women to shine. The enthusiasm among the teams has been great and most of the are bringing their biggest stars whether they be very suited to this course or not. So this should be a huge party for women's cycling and with live broadcasts all over the world everyone is invited to join in for once.

The basic facts of the race is the instantly recognizable Champs Élysées circuit, the same as the men do every year. The women will do 13 laps of the course to make it an 89 kilometer race in total. 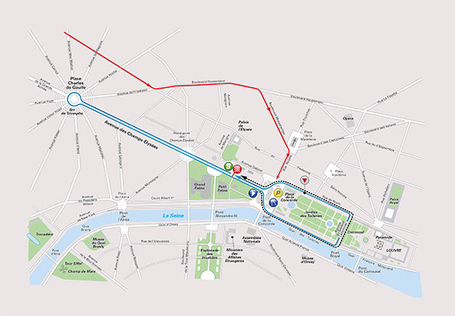 Obviously there are no climbs here so it will be a tough task for attackers to stay away from the sprinters but try they will. If there is anything you can count on, it's that. Twenty teams of six riders will take the start. Seventeen UCI teams and three national teams, France, Netherlands and Australia. All the top ranked teams from our FSA DS game are participating and all the top 10 ranked riders too, not sure if any other race (male or female) can boast that statistic?

So what kind of race can we expect?

This won't be much different from many women's race apart from the terrain perhaps offering a bit less challenges than usual. Short and flat can be used to describe a fair few races on the calendar but they quite often take place in windy Netherlands or on the small twisty roads in Belgium. The big road riding will remind the riders most of the Chongming World Cup and and the early season Qatar races, both of them sprintfests. There will be no shortage of attackers here though with a lot of strong riders who normally wouldn't be too interested in a race like this but thanks to the prestige of the day they will no doubt give it a try. Keeping this together for a sprint will thus require a ton of work but there should also be a fair number of teams working towards that goal so it will come down to whether they can actually cooperate when the big names sail off the front?

Given the nature of the race we certainly won't see the "worlds best female racer" crowned here as some want to sell it as given the big stage and occasion. Best sprinter maybe, but unfortunately this doesn't really give the best riders the opportunity to shine. Just as the last day of the TdF on Champs Élysées is a big deal for a select group of sprinters, so will it be for the women. But with better racing.

If it comes down to a sprint there are probably four names above all else.

1. Marianne Vos. - Rabo/Liv
Of course. Not only is she the strongest attacking rider in the world she is also one of the top 3 sprinters on any given day. It's a scary combo and for those who mainly watch men's racing it's hard to fathom that Froome or Nibali could also sprint on equal terms with Cav and Kittel but that pretty much describes what Vos does. She's not an unbeatable sprinter like a Cav at his best but she can most definitely beat anyone of the top specialized sprinters.

2. Kirsten Wild - Liv/Shimano
If Vos is the allrounder then Wild is the pure specialist. She is the heavy bomber type with a background in track sprinting too. She's not as explosive as a few of the others but on pure power and top end speed she is formidable. She's also able to control a field from the front practically on her own. Her Liv(Giant)/Shimano team is also as impressive in the leadouts as the men's side of the squad so that could be a deciding factor here. 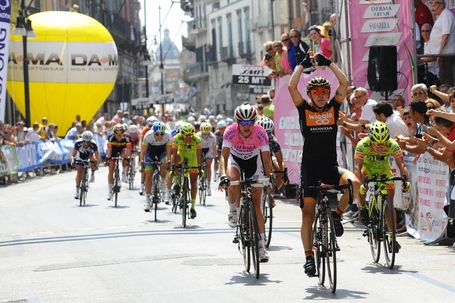 3. Giorgia Bronzini - Wiggle Honda
The Italian two time World Champion has managed to do what practically no one has since Vos broke through, and that is to frustrate the Dutch cannibal. As the lightning fast finisher she was the ultimate weapon in the Italian sides that kept Vos from winning Worlds for years. When on form she is probably more explosive than anyone in this field. She's also the lone leader on a Wiggle team that is perhaps a bit split with the Commie games occupying their British track riders but still very strong.

4. Shelley Olds - Ale Cipollini
The tiny American has had a big year so far but unfortunately she is dependably highly placed on the podium in the sprints but she doesn't tend to win a whole lot of races. Ale Cipollini is another strong team that excel at keeping their leader in the right place for the sprint and should we see a sprint from a reduced group Olds is an even bigger favorite.

Outside these four there is a handful of favorites, most notably:

- Emma Johansson - Orica
Still the number one ranked woman in the UCI as well as the FSA DS rankings, mainly due to her incredible consistency. Almost never out of the top 5 in the big races whether they be echelon races in Holland or hilly World Cups in Italy. She wins less than you might think but that is to a large part a result of lining up opposite Vos for all of her career. Emma will probably be looking to thin down this race to make it a decision from a select group were her chances will double, even if she has become a very competent bunch sprinter at this point. 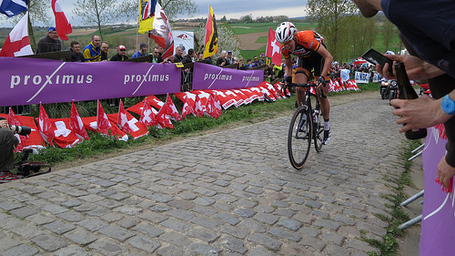 - Lizzie Armitstead & Ellen van Dijk - Boels -Dolmans
Armitstead is one of the stars of the season so far with a brilliant spring where she and her new Boels-Dolmans teammate produced a hard-to-beat tag team. Both strong solo riders and sprinters they managed to check-mate competitors in a way that only the Rabo team has managed in the past. In a hard race , when one goes up the road and the other sits on the chase there are very few winning scenarios for the other teams.

- Elisa Longo Borghini - Hitec
This should prove too easy a course for the Italian star probably, with the teams main focus being putting aussie sprinter Chloe Hosking in a good position to win I would think. Longo Borghini is one of the few who can hold her own in a group with Vos&co though so the team has all bases covered

- The Rabobank Rabble
The one very very slight teeny tiny problem with beating Rabobank is that behind Vos there is a bunch of riders who are only ever so slightly less dangerous than the cannibal herself. And what's worse, she isn't afraid to let them ride off and win big races that she could have won herself, in fact she works actively to make it happen. So if you are another team, you're basically screwed much of the time. Because Rabo also have: Pauline Ferrand-Prevot, the absolute breakthrough rider of the season. Her riding this year can only be described as "Vos-ian" which isn't too surprising as she has been labelled "the next Vos" for years. Turns out the label was right. Ooops. Then there's Annemiek van Vleuten who has worked past injury problems to return to her World Cup winning form of 2011 where she is pretty much on par with Vos and Johansson in the one-day classics. And there's Anna van der Breggen who is the next next Vos. Mostly used as a workhorse on Rabo so far but when she gets away, good luck catching her. Rounding out the team are Lucinda Brand and Iris Slappendel who would probably be the stars on most other teams but here "just" happen to poach big wins every now and then. That sound you're hearing? That's other teams crying at the thought of lining up against this team.

- Jolien D'Hoore
There isn't a huge number of big Belgian stars in the women's peloton (in fact the one dominant, Lisbeth De Vocht is just retiring) but D'Hoore who has gradually turned her attention more and more from track to road has had a breakthrough this year and should be challenging in the sprint for Lotto-Belisol (who by the way is one of four teams that will see it's WT teammates ride a few hours later. Orica, Astana and Liv(Giant)/Shimano are the others.). At some point early on it's almost inevitable too that we will see a solo-attack attempt by D'Hoore's Lotto teammate Emma Pooley, one of the driving forces behind the initiative that gently pushed and prodded the ASO into taking this step towards incorporating the women in the Tour de France.

-Specialized-lululemon
Strangely the once dominant sprint squad (former HTC) doesn't really factor in the sprints this season. The sprinters have retired or moved on to other teams and instead S-l will be depending on offensive riding from Germans Lisa Brennauer and Trixi Worrack and perhaps Chantal Blaak or Carmen Small. Their chances look pretty slim on this course since it's not really their terrain.

- Hannah Barnes - United Healthcare
An interesting one is Barnes who dominated British domestic racing last year and has made a good transition to the next level on UHC.  She has a sprint-dedicated team behind her and they could make themselves a factor on a course like this.

How and when to watch the race?

The race starts at 12:50 CEST on Sunday and there should be live video on pretty much all the channels that broadcast the TdF (and if they aren't showing it you pretty much know they're assholes and you would be better off watching the TdF and La Course on a pirate feed anyway.).  If you are looking for more on the race itself , best place to start is Sarah's intro where you find much more facts and predictions plus links to every bit of obscure info there is about this race.