Here's your race preview: there's gonna be a sprint on the Champs-Elysées. Details and an informative, entertaining and highly cogent discussion of the maillot vert below.

In the end the competition for the maillot vert went out not with a bang, nor even a whimper. It was barely ever noticed at all.

Peter Sagan of Cannondale will ride into Paris coated in green for the third time in his still shockingly young and illustrious cycling career, and with any good fortune -- actually, quite a bit of good fortune -- he might even avoid the dreaded result of Points winner with no stage wins, something that hasn't happened since 2005 (Hushovd). But there's a far greater chance of Sagan not taking the stage, which combined with his having put the competition to sleep early on in the race could lead to changes next year.

This is pure speculation on my part, but we know that Le Tour has done its best in recent years to make all of its jersey competitions reasonably robust, to the extent it's in their control. Obviously yellow and white are a function of riders riding for the overall, something for which they need no extra encouragement. Polka dots -- best climber -- has been a tricky competition to manage, having been completely hijacked by riders way down in the overall for more than a decade. The secret to winning cycling's best-looking jersey became to drop oodles of time as soon as possible, then go on one or more long, heroic breakaways on stages where one can scoop up enough points to take home the prize. The Tour loves itself some heroic breakaways, but what was not so cool was the recurring situation where the King of the Mountains wasn't an especially strong climber. The irrelevance of the riders wearing the iconic jersey began to bleed into the jersey itself. Then the scoring changed, emphasizing MTFs far greater, since that's where you tend to see the best climbers win, and presto! The KOM jersey, while still a sideshow, is back to being an entertaining one between respectable combatants.

As to green? Well, let's look a little closer at why it was such a dud. The simple answer is the course, which featured not just an endless succession of rolling hills but sprint point placements after or on top of those hills so as to favor Peter Sagan almost to exclusion. I covered this enough in the Viewers' Guide that by the time he got done reading it, Douglas (and Jens and I) gave up on trying to write a separate post that would somehow make the Points Competition seem interesting. I think maybe he did one anyway? But by then the horse was out of the barn, across the pasture, and maybe even swimming to Chincoteague. [Shut up. I have an older sister.] The point is, everybody saw a Sagan landslide coming.

Marcel Kittel, for his part, must have, because he never seemed interested in anything more than the title of the Tour's Fastest Haircut. Kittel stayed within a single day's results of Sagan through four stages, but began fading quickly after stage 5 (-50 points), 6 (-82), 7 (-122) and so forth. Mark Cavendish, had he not crashed out, would probably have given chase, as a former jersey winner and all the experience and pride that implies, not that Cavendish needs help finding desire to win. But his fate would've been sealed by the first rest day too. Same for Andre Greipel, who was coming off an injured spring campaign.

Bryan Coquard of Europcar did take up the chase in earnest, a move that was both adorable and very French. On the former, I can say with some experience from my own cycling career what happens when you show up unexpectedly spoiling for a fight. I've been known to attack at the base of climbs in long races, early on while I'm still racing. [Another word for this would be "smart." What's worse, getting dropped at the base of the climb or getting dropped halfway up?] Bemused expressions are not unfamiliar to me. As to the latter, French riders are not known to take their purported irrelevance at the Tour lying down, a point underlined by this year's GC. If a Frenchman wants to spend three weeks pointlessly riding his bike, he can go to the Giro. Anyway, Coquard hung around a bit longer, and is sitting second on points heading into the final stage. Barring disaster, he'll go home with a little extra cash in his pocket and a little more fame after standing around the podium in Paris.

In short, the points comp didn't seem to engage anyone besides Don Quixoquard, for all the same reasons it didn't engage us to write about it. Even Sagan seemed dreadfully bored with it after a week. Sure, you shouldn't read too much into riders' emotional displays right after a stage, but I think it's fair to say that Sagan hungered for the explosion of joy that comes with winning a stage -- not to mention the honor to the green jersey. Instead, he lost time and again, the final indignity being the crash he himself admittedly caused Friday. Was this Tour a non-disaster for him? Tough call. I bet he'd trade places with Alexander Kristoff, double-stage winner (and third on points today) whom I formerly regarded as Sagan-Lite. Kristoff might not win green, but this season he's bagged a Monument and two Tour stages -- all of which rate far higher than another green jersey.

To rectify all this, the Tour needs to find a way to engage Kittel (and in turn all the other fastmen) in next year's competition. Part of this will be determined by the parcours, which isn't likely to be as constantly hilly and transitional and will probably feature lots more flats. Then there are the obvious choices ASO can make to enliven the competition. I am not suggesting changing the points scale, which was previously changed to encourage the less climby sprinters. I am strongly suggesting they put fewer intermediate sprints out of reach of the Kittel/Greipel types. The tendency this year to tip the intermediates to Sagan (and maybe Kristoff) seemed deliberate, even gratuitous, and it essentially ruined the competition. So yeah, that thing, cut it out.

As for Stage 21, here's an obligatory profile. It should be all Kittel, but you never know. 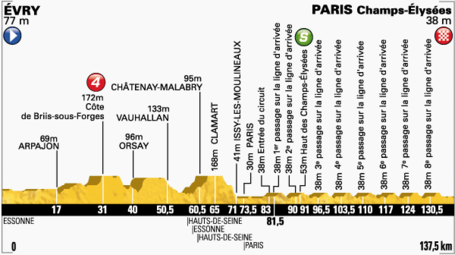 I like the point in today's comments that the annual practice of dropping a pin on a Paris suburb landed on Evry. That's where the parade launches from. Nobody will remember this later. Hopefully they didn't pay too much.

AmyBC's Wine of the Day

Champagne today, though I considered a favorite Sicilian wine to honor Nibali. But, I've written about it before. Do know that my love of the Calabretta Rosato remains strong. 100% Chardonnay­. Rich and nutty with pear, apple and yeast.