The women's La Course became the sprint showdown between the best in the world that we had been expecting with the worlds greatest cyclist Marianne Vos taking the win over Kirsten Wild.

Share All sharing options for: Vos the Great Conquers Paris 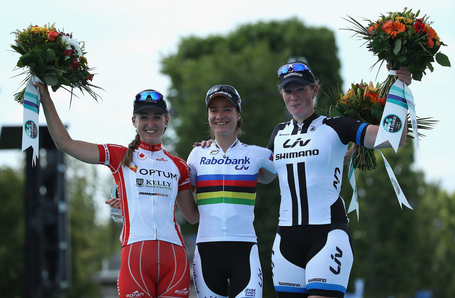 After much anticipation the women finally got to take command over the classic Champs Élysées circuit in central Paris  and race on one of the holiest places in cycling. As expected it was a fast race wher breakaway attempt were multiple but also mostly futile. Riders tried on every lap to build a gap with riders like Alena Amialyusik, Lizzie, Armitstead, Ellen van Dijk and Pauline Ferrand Prevot among those having a try but they never got much of a leash. Playing the defensive role to perfection were Giant Shimano who managed to put a rider sitting on almost every break and when they didn't then Rabo had a rider there or Wiggle-Honda was pulling the race together from behind. 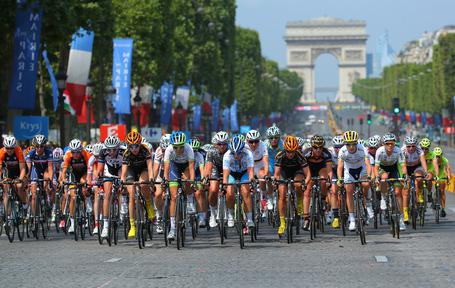 Almost invisible all day was Rabobanks Marianne Vos who only appeared on images briefly as she held herself near the front in the moments where the almost eternally stretched out peloton threatened to split up into smaller groups. When the peloton came out of the tunnel and approached the sprint both Wild and Vos were in perfect position and it was clear that it would come down to those two. Wild opened up first made her patented power-sprint from the front but Vos had an aceleration in the final 100 meters that the bigger Liv/Shimao rider could not match. Vos took the race with about a bike length with a resigned Wild rolling in behind. In third and almost catching Wild in the end was Optum's Canadian champion Leah Kirchman who continues to impress this season. 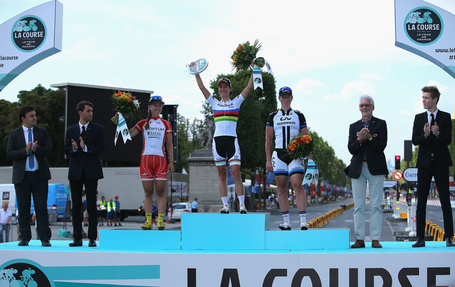