Kittel returns to the throne

Once again Giant-Shimano's Marcel Kittel takes the un-official sprinters championships on the Champs Élysées and bookends a successful Tour de France with wins on the opening and closing stages. Behind him Vincenzo Nibali finishes safely to win his first Tour and become the sixth man ever to win all three Grand Tours.

Share All sharing options for: Kittel returns to the throne

Marcel Kittel has been looking like a man who hasn't enjoyed the last week of this Tour very much. But he certainly feels better about sticking it out today after overcoming Alexander Kristoff in the last 50 meters to win his second Champs Élysées stage in a row. His Giant-Shimano team did a perfect job of setting up their supersprinter near the end it looked as if Katusha's Kristoff had timed his charge just right to take his third stage. He held the lead and looked to be maintaining his superior speed but behind Kittel wound up one last sprint at full power from his tired legs to take a solid if not as dominant win as last year. Sometimes though winning when you are not on top is even more impressive. Once again non-sprinter RamunasNavardauskas snuck in a surprise result taking third place 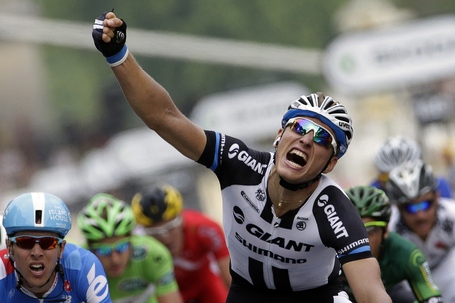 Despite a slight scare as French hero JC Peraud crashed early on the finishing circuits there where no changes in the top 10. Vincenzo Nibali once again put Italy on top of the cycling world by winning it's most prestigious race. He has now won the Vuelta, the Giro and the Tour de France, a feat only accomplished by Anquetil, Merckx, Hinault, Contador and his countryman Felice Gimondi before him. The Shark of Messina thereby enters the pantheon of the true greats. 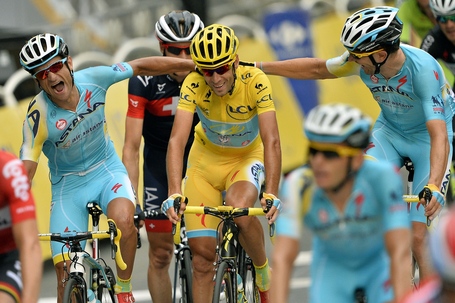