All hail the hegemony! Annemiek van Vleuten wins the Giro Rosa prologue, in a Rabo-Liv domination

The biggest women's cycling stage race of the year started tonight, with a 2.05km prologue in flagstones in the dark. And we knew Rabobank-Liv was going to do well... but this was spectacular!

Share All sharing options for: All hail the hegemony! Annemiek van Vleuten wins the Giro Rosa prologue, in a Rabo-Liv domination

It started off in good form, with Roxane Knetemann taking an early lead, and then the Rabo numbers just kept falling...  I can only imagine the look on DS Koos Moerenhout's face, as more Rabo riders kept starting, and pretty much flying!  Here's the top 10: 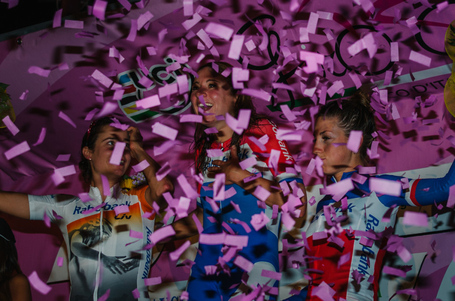 Photo used with kind permission of Sean Velofocus - make sure you check out all his pictures!

Well, wow! It's especially good to see Annemiek van Vleuten leading the Giro- she's had such a bad few years with he scar tissue in her femoral artery causing her real problems in her racing.  After so many operations and frustrations, it's wonderful to see her back on the top step!  What are her plans for the rest of the race?

#GiroRosa14 @AvVleuten 'I am a prologue specialist but 50k speed is incredible. My role this Giro? Supporting our captains. No more no less'

Given that Rabo are racing with three leaders - World and Olympic (& multiple everything else) champion Marianne Vos, Fléche Wallonne, MTB World Cup and Junior World Champ in Road, MTB and ITT, Pauline Ferrand-Prévot and super-climber Anna van der Breggen, this must be very scary for the other teams - but if there's one thing we know about the women's peloton, it's that they'll try with everything they have!

Here's the Cyclingnews report, with quotes from Van Vleuten just after the race, including

"I am usually good with prologues," Van Vleuten told Cyclingnews straight after the finish. "I trained at altitude before the Giro Rosa and this prologue really was a goal."

More race reports!  On Van Vleuten's website, and blogs from Tiffany Cromwell on CyclingTips, and Chloe Hosking on her site.  You have to read both of those, they tell the story really well AND give a really great insight into how riders race something like this. And report and photos from the fabulous Sean VeloFocus.

If you believe in "start as you mean to go on", then Rabo look like they're going to have an AMAZING Giro!  Of course, that's only 10 seconds between first and tenth, but the confidence boost is enough...

If you want to follow the race as it happens I have a guide on my blog.  And any videos and photos that turn up, add them to the comments and I'll add them here. I liked this...

QOTD by @stacherchick "2km prologue is like having sex with a virgin .. It's over before you know it."

USA cycling journalist Clara Beard couldn't be at the race, so she sent her parents to do some interviews

and some race footage: