"Stage 1 is for sprinters"... what were we all thinking? After a prologue raced on flagstones in the dark, it was time for 11 laps of a super-tough little course - and as you can imagine, the action was explosive! Videos and photos to come - if you see anything fun, add it to the comments!

Stage 1 was the "crit-like" stage, 11 laps of an 8.6km circuit with a climb and descent, and lots and lots of corners.  Here's what Karl Lima had to say

Neutral lap done. This course is the hilliest 'flat' stage I ever saw. And extremely technical

And here's Chloe Hosking's blog about the race on Cyclingnews.  Includes this:

Why did we have a neutralised lap I hear you ask? Well, the easy answer is because the course was crazy. With an extremely narrow approach to the climb, combined with a technical descent that was followed by an even more technical and narrow flat section there were more than a few occasions during the neutralised lap that I found my self holding my breath and hoping for the best, and maybe muttering a few other things.

It was a hard race from the start, with riders being dropped all the time - and on lap 4 we saw a small group go away, and then attacking out of it, Valentina Scandolara (ORICA-AIS) doing what she's known for, and attacking solo!  She took the first Queen of the Mountains points, with fellow Italian Elisa Longo Borghini and her Hitec team-mate Ashleigh Moolman taking the others as they chased hard, and then Specialized-lululemon's Trixi Worrack attacked out of the chase and was caught - and then it was a small group of Scandolara with Carmen Small (Spec-lulu), Ane Santesteban (Bizkaia-Durango), Ellen van Dijk (Boels-Dolmans), Lucinda Brand (Rabobank-Liv), Mayuko Hagiwara (Wiggle-Honda) and Moolman - they were caught, and Moolman attacked again, this time getting clear with Rabo-Liv's Annemiek Van Vleuten in the maglia rosa - up to 50 seconds, and then to 1:15 as they finished the 7th laps, with Tetyana Raibchenko behind them solo, and the rest of the chase in pieces, lots of groups out on the road forming and re-forming, with Rabobank working hard to control it all - very exciting racing. 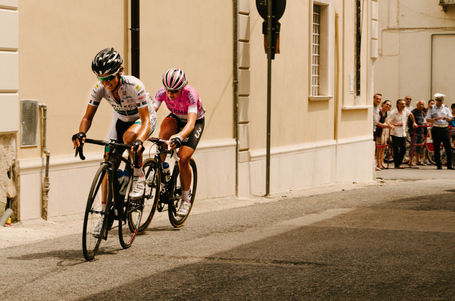 Riabchenko caught the front pair, but the gap started falling, and as they crossed the line with 3 laps to go, it was down to 35 seconds, as Rabo didn't like the odds for Van Vleuten and pulled the break back.  More breaks, more groups, more attacks, and at 2 laps to go, another Hitec rider, Audrey Cordon attacked, with Wiggle-Honda's Peta Mullens counter-attacking, and then on the penultimate climb, Pauline Ferand-Prévot (Rabo) put in a superb attack, that only her team-mate Marianne Vos and Hitec's Elisa Longo Borghini could follow.  They caught up with Cordon, and it was two each from Rabo and Hitec, while behind them the chase was changing so fast that it was impossible for the live-tweeters to keep up - but with 2009 winner Claudia Häusler (Liv-Shimano) pushing hard, with defending champion Mara Abbott (UHC) and Boels-Dolmans' Megan Guarnier, and later Moolman again and another Rabo, Anna van der Breggen, keeping an eye on the break for their team-mates up the road, while other riders came and went.

Coming into the final lap there were four leaders, but as the lap ticked down, and that last climb put the hurt on, Cordon was dropped, after a valiant effort in her first ever Giro.  There were lots of action as all three leaders tried to get away, but they came into the final run-in together, with Vos accelerating through the final sharp corner as only she can, and powering down the cobbled finish for something we've become VERY familiar with over the last few years of the Giro - Marianne Vos won, by a nice big margin, and took the lead jersey from her team-mate...  Rabo-Liv on two for two! 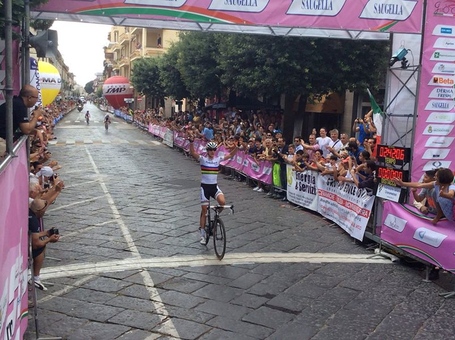 And it was one tough race!

That was one ugly course. No riding into this years #girorosa ... Super hard day out, it was relentless. I'm happy to have my legs back.

Superb racing from Hitec as well as Rabo - they really made the race hard, and Moolman ended with the sprint jersey and mountain jersey.  Here's her audio update from after the race.  And more rider-eye-views of the stage from Peta Mullens, including her breakaway, and Tiffany Cromwell, on an 'ugly' stage.  UPDATE! And Marijn de Vries' blog on puking all the way round - get well soon Marijn!

Fantastic gallery of photos on Velofocus

Bad news for Emma Pooley - she was dropped mid-race, and Lotto-Belisol's Guy Kostermans reported she'd had a nose bleed since the beginning of the stage.  She made it back, but in the last 2 laps she had a mechanical and was chasing on again, and finished 4:59 back on GC.  Here's hoping she got all her bad luck out of the way, and has a stress-free race - and that she gets the chance for one of those beautiful solo breakaways she's known and loved for.

No interviews from Clara Beard's parents today, but here's her dad's video of that tight tunnel: