Confession, I've been way, way, waaaaay behind on the chatter, but in catching up I've been struck by the number of teams targeting stage 2. Basically, everyone not listed on Douglas's yellow jersey preview, everyone not interested in defending yellow anytime soon is lining up to defend it for the first week. Why? Start with this: 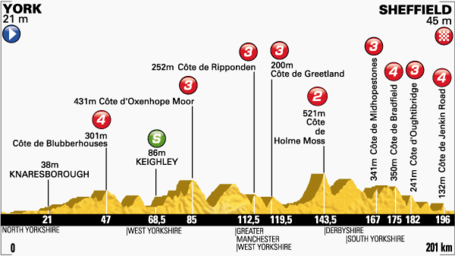 Nine rated climbs, including a rather early cat-2, is nothing to sneeze at. The stats suggest nothing too odd except the Holme Moss, a full 4.7km at 7% average, which should ensure that the sprinters aren't around for the finale. Not only that but:

So yeah, this is a big deal. With no time trial or major climb, long-term ownership of yellow -- and all the sponsor love it entails -- is on the dock.

Whom does the course favor? Dozens and dozens of riders. I can think of a few to note (and that I noted yesterday):

One more scenario: someone gets the jersey tomorrow, but by a second or two. And the battle for early yellow turns into a week-long brawl. Yep, this should be a pretty fun start.

Why gin? Because when I think of England and alcohol, gin is one of the first that comes to mind. Also: "Gin craze."

So this gin is infused with saffron, which explains the slight yellow tone. One should probably drink it with simply an ice cube. But I wanted a cocktail. My first thought was a Negroni. But instead, I'm drinking anAviation. Because when you have gin, Luxardo and Creme de Violette at home, it becomes the right thing to do.