After the race started with a bang, with night-time cobbles and an "easy" stage that was anything but, Stage 2 was promised as definitely flat, and billed as one for the sprinters, with 6 20km laps.... but it was anything but easy! Lots of videos, photos, blogs, and of course, the full results, all below....

After the first lap, the riders were all together in the bunch

It was a fast race according to twitter, with no one able to get away, thought people were trying all the time - "hard, hot and hectic", said Marijn de Vries.  Lots of attacks, especially from the Italian teams, with Astana-BePink trying, and Carla Ryan of Alé-Cipollini having a couple of goes - the kinds of attacks that made everyone chase hard, with Hitec Products spending a lot of time on the front, setting the pace.  Hitec have really put a marker down, what with all their attacking yesterday, and they made it clear that they were going after this race right from the start, with Alé Cipollini working hard as well - the first two laps averaging 44kph. 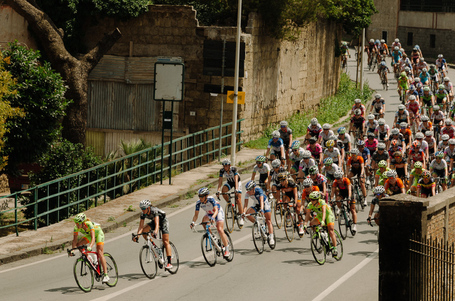 Photo used with kind permission of Velofocus - check out his gallery

At the halfway point, the speed was increasing, with the Cipollini team all on the front and controlling the pace - keeping the speed high to try to prevent attacks off the front, because we all know that just because a stage is "meant" for the sprinters, there are a ton of riders who will try everything to change the script - remember Tiffany Cromwell's 100km solo breakaway in 2012, for example?  But the first half of the race was punctuated by punctures rather than escapes, with the potholes in the roads taking their toll, riders tweeting that they were some of the bumpiest roads they had ridden on.  It didn't sound fun at all, and was obviously a stressful stage.

Stage2 felt more like horseriding than bikeriding.Jumping up&down all day to avoid holes.Lucky to have such a good racehorse @specializedwmn

Today might have been a "flat" stage, but I am pretty sure I gained some ascent meters climbing out of those potholes!

The rider who managed to get away was Alexandra Burchenkova (RusVelo) who escaped halfway through the 4th lap, getting 15 seconds, and climbing fast to 45 seconds, but despite Cipollini leading the chase through the lap, and Hitec taking it over as they crossed the line into the penultimate lap, she had around a minute and a half on the bunch....  and it seemed like they were just playing with her, because she had 10 seconds as they came through into the final lap, the peloton stretched out into a long line. 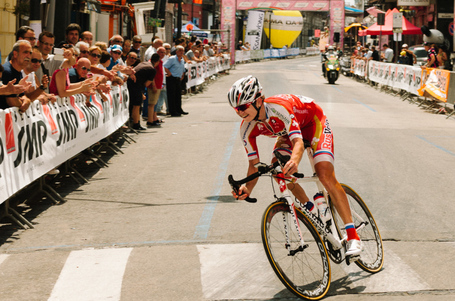 In the last lap, Valentina Bastianelli (SC Michela Fanini Rox) attacked and although the chase was disrupted by a big crash that took down big GC favourites like Ashleigh Moolman and Claudia Häusler, and sprint-stars like Chloe Hosking, Bastianelli was caught and the peloton was racing hard and fast to prevent the opportunists from leaping off the front - so that despite the Specialized-lululemon riders lurking at the head of the race, ready to take any chances that came along, they couldn't get away.  ORICA-AIS lead the bunch screaming through the final kilometres, with Spec-lulus taking over as they rode under the flamme rouge... and it all came down to a bunch sprint.

...and Italian joy, as Giorgia Bronzini won the stage for Wiggle Honda!

Last year Bronzini was the first Italian to win a stage at the women's Giro since 2009, which was surprising, because she's VERY fast - with three World Championship golds to prove it, one in the points on the track and two on the road, in 2010 and 2011.  But last year she won Stage 2, too - let's see if next year's Stage 2 is flat as well!  Here's the Wiggle Honda report, and their Stage 2 video.

Here's another little video of the stage podium, by Velofocus - and his excellent photo gallery from the stage.  More photos on the UnitedHealthCare facebook and on Boels-Dolmans' website.

I caught up with Valentina Scandolara after the stage and asked her a couple of questions.  We'll be trying to talk to Vale and her team-mate Amanda Spratt every day, so if you have any questions for her, let me know in the comments there. As always, I love Chloe Hosking's very honest blog on bad luck, disappointment & great team-work -  Tiffany Cromwell's blog on CyclingTips, all about spending her birthday "playing a real-life video game on bikes" -  Peta Mullens' blog on being part of the winning team - and Ellen van Dijk on looking after her "little chick" Megan Guarnier (see Confused Spider's translation in the comments)

And there are the more formal race reports from ORICA-AIS and Specialized-lululemon.

With no climbs, Vos kept the maglia rosa, and bonifications adding to her lead, while Emma Johansson and Megan Guarnier climbed a few places in GC - and some changes - I've included some big GC names.  Here's Ash Moolman's audio report talking about her final lap crash, and what the race was like.

We'll update this with more information once we find it - and as always, please add anything you find into the comments