It's hardly been an easy Giro Rosa so far, but today the peloton was ready for the first big climbing day, and it was another hot one. It was meant to be the day the General Classification was all shaken up, but would that be the case? Videos, photos, results and rider blogs - with some words just for Podium Café from our winner!

Share All sharing options for: The escape that could - Annemiek van Vleuten wins Giro Rosa Stage 3

The race highlights and the 45 minute tv coverage

When we see a stage like this, we can imagine what'll happen - a couple of attacks in the early stages, a break with no big names in it over the lumpy section between 20 & 70k, a battle for positioning to get to the big climb first, and maybe the break stays away up the foothills of the climb, but it's all about the GC contenders, and at the end of the stage, the GC is shaken up completely.  Which is a fun day, don't get me wrong....  but what we got was FAR more exciting!

The first 20km were gentle and safe, a couple of attacks, and then once they hit the 30km of jagged-profiled climbs, with some steepness to warm up the legs, 15 riders took the opportunity to escape. The break was a real mix, with 4 previous Giro stages winner in top sprinters (& yesterday's podium stars) Giorgia Bronzini (Wiggle Honda) and Shelley Olds (Alé-Cipollini), escape artist extraordinaire Tiffany Cromwell (Specialized-lululemon), who won in 2012 with a 100km solo break, and Stage 1 winner and no mean climber herself Annemiek van Vleuten - was she there to help her three Rabobank-Liv team-mates who are contesting the GC, or for herself?  With them, the biggest name was probably Olds' team-mate Elena Berlato, a former Giro Best Young rider, and a collection of what I would have said were domestiques working for their teams - , Julie Leth (Hitec), Doris Schweizer (Astana-BePink), Sarah Rijkes (Lotto-Belisol) and two rider who love the attacking, Valentina Scandalara & Loes Gunnewijk, both of ORICA-AIS - except that once as they hit the climb with around 50 seconds lead, they went right off-script! 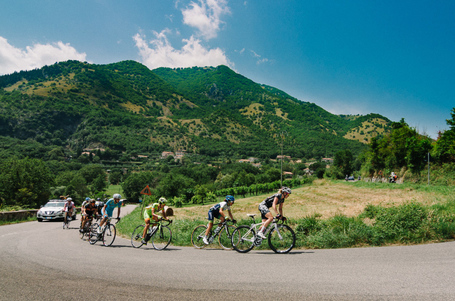 The Belmonte Castello is Cat 2, and not hard compared with the giant climbs to come later in the race, but still formidable, climbing 520m over 7km, at an average 7% gradient...  and it was out of wifi zone, so came as a big surprise we heard the results from the top, Scandolara taking the QoM points ahead of Schweizer and Berlato..... Scandolara?  Surely she's more of a sprinter/all-rounder?? Queen of the Mountains points?  Fabulous!

After the climb there was no more flat at all - up & down for around 30km, then uphill for the last 5k.  Shelley Olds immediately tried to escape on the descents, as the lead group were down to 11, with a 1:10 advantage, and Rabo-Liv finally leading the chase.  Olds was caught, and while riders were being shed, Mayuko Hagiwara attacked out of the chase and bridged across to the group...  then and at 25km to go Scandolara attacked....  of COURSE she did, that's what she does! But the escape group started to be pursued in earnest, and at 15k to go they had around a minute, with riders dropping off the front all the time, as attacks kept lighting up the front.  They couldn't relax for a moment, as each rider gave it go after go, and behind them the chase was in sight - but only Wiggle-Honda's Mayuko Hagiwara could attack off the front and join the escapees, in a super-clever move.

The gap and the break group were dropping fast, with just Berlato, Cromwell, Hagiwara, Schweizer and Van Vleuten left to battle up the last 5km of climbing, with only 15 seconds, and definitely in the sight-line of the bunch - but they didn't give up, and after attacking again, Cromwell dropped off.,. and as AvV's team-mate Marianne Vos made sure she was always at the head of the chase, looking out for Van Vleuten, but ready to attack if she was caught, Annemiek made her move, in the last few kilometres, blasting away from the others and up the hill and proving yes, she is definitely back!  Would she be caught by her own team-mate?  Would the other 3 breakaway riders be caught?  It was breathless right to the line! 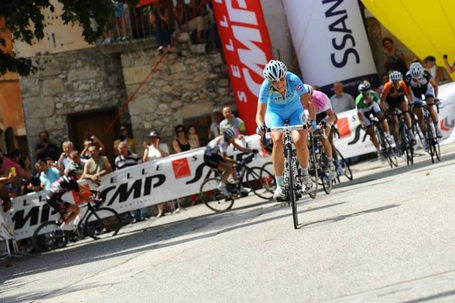 Look how close the chase was to Schweizer!  Photo from Giro Rosa facebook

Such a superb victory for Van Vleuten - and it's especially good after the last couple of years, when she's really suffered from recurring issues with scar tissue in her femoral artery that have prevented her from reaching the heights of her World Cup series winning 2011.  She's had various operations in her off-seasons, but has said that it's been like riding with only 1 leg, and especially suffered through stage races. As she told us at the start of the season, she had another operation this winter - so fantastic for her that it seems like it has worked! She was kind enough to answer a couple of questions for us after the race:

PdC: What was your plan for today?  When you got into that break, did you expect it to stay away?

Annemiek: The plan was to put someone else in the front, save energy for GC riders and be in the breaks, but don't ride. When I got into the break, I expected the chase would bridge the gap in the climb. When they did not... I expected them on the final climb. So I only started to think about winning with 5km to go.

PdC: When did you know you could win, and how was it, racing the chase group AND the other break riders?

Annemiek: I did not ride with the breakaway because my team director had told me at the team meeting I was not allowed to and with 30km to go they started attacking and I had hard job to counter everything (alone). with 3 km to go the attacks stopped and we were only left with 4 riders in the break. I decided not go into the sprint with them, and to attack with 1km to go. My goal was the stage victory, not to take time for the GC. We have 3 GC riders. With uphill finishes the last two stages... I am not the one who goes for GC. But I was very happy to achieve my goals in this Giro already and it also helps me to be extra motivated to ride for the team.

Read her account of the day on her blog (Dutch, or via google translate) and in the Cyclingnews report, with quotes from her & DS Koos Moerenhout (thanks Confused Spider!) 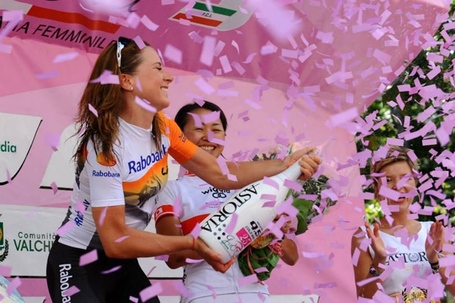 Great result too for Mayuko Hagiwara - the first Japanese rider to get onto the Giro podium, and her best UCI result to date, and down to super-gutsy riding and taking a risk, attacking out of the chase - chapeau!  Here's the Wiggle video:

There was some shake-up in the GC, even if it came from bonifications and wasn't exactly as we expected - and the maglia rosa stays with Vos, whose group included Longo Borghini, Moolman, Häusler, Guarnier and her team-mates Ferrand-Prévot and van der Breggen - while Evie Stevens and Mara Abbott finished 6 seconds behind them.

Here's Ash Moolman's audio report of the stage - and Iris Slappendel's latest WielerReview column on Annemiek (Dutch and translated).  And I caught up with Valentina Scandolara and her team-mate Amanda Spratt after the stage, to ask them how the Giro is going, and how the stage felt.

More blogs - Tiffany Cromwell on gambling in the breakaway, on CyclingTips; Chloe Hosking on small victories and putting on a show, on Cyclingnews; Marijn de Vries on leaving Naples behind & losing wheels (Dutch or UPDATE! Now in English!), & Peta Mullens on team-mate success.

We'll add more information as we see it, and videos, photos and blogs when they turn up - but here are the great Velofocus photos from the stage - and more gorgeous photos from Wei Yuet Wong on his tumblr