It's always a joyous occasion when the Tour de France comes home from abroad. And so, yeah, that happens tomorrow, or perhaps there are team buses driving through the Chunnel as we speak, if that's how that works. But there is another age-old tradition at work here, the slow return via Belgium, France's closest relative. Belgium has hosted more stages or bits of stages than anyone besides France, including Grand Departs and week one treks back from the Netherlands or UK. So yeah, hello Belgium! In fact the Tour only spends about ten minutes or so in Belgium, or straddling the border. It's like the Tour is waving to Belgium, trying to get its attention, but not for any particular reason.

As to what this stage is really about... 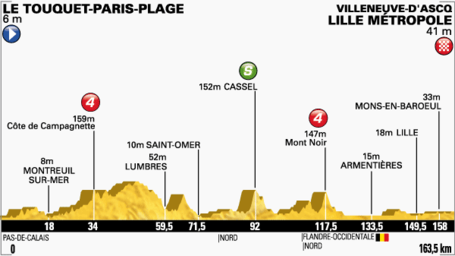 Climbing!! Um, yeah. I previously raised some question as to what that little lump upon which the intermediate sprint takes place is exactly, but I guess we'll find out tomorrow. Both of the rated climbs are pretty forgettable. Mont Noir, for example, has occurred in Gent-Wevelgem, which means it has failed to eliminate all that many sprinters over the years. 45km from the line, it won't this year either.

My hunch is that we're looking at a bunch sprint, and another glittering chance for Marcel Kittel. The finish appears to happen on a wide, straight road, where Kittel is virtually unstoppable. The forecast calls for possible (not certain) rain all day tomorrow, so it's especially fortuitous that there is no tricky run-in. That said, there is a pretty tricky run-in through the Lille city center, 18km from the line. At that distance the peloton can afford to tip-toe through town and resume chasing the inevitable breakaway afterward. Fingers crossed.

Coming into the stage Peter Sagan holds a slight lead in the Points competition over Kittel and Bryan Coquard, one likely to grow on this day. [Is it me or has he completed his hair helmet?] Cyril Lemoine and Biel Kadri might be on the loose as they battle for slim KOM points. Cadrius went and dropped 18 minutes so he is guaranteed a very long rope. Yellow contenders will be sitting this one out for sure. Enjoy!