What the hell did they do to the roads?

I've already screamed about this stage, like five different times. [I'm particularly proud of this headline.] So one last time, I'll paste in the details. The bouncy part: 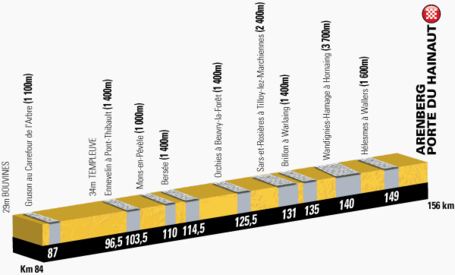 And the data, from last week:

So you've seen all that. Now, who do we like to actually win?

Fabian Cancellara is here, and he'd like you to know that, in case you hadn't already suspected that on stage 1. Cobbles guys are just as attached to Tour stages as anyone else, possibly more so, since they have so few realistic chances. So here you go.

Pick anyone from that group and you can make a case. I suspect the race isn't hard enough for Cancellara to just destroy everyone, but the last secteur probably is. He's your conventional favorite, but as usual if everyone gangs up on him, then anything can happen.

Stage glory is probably the subtext for this stage, because the real significance will be the test of the GC contenders. You can pretty much guarantee that a couple of them will have trouble. Hopefully not of the crashing variety, but if the weather is bad, then there's that too. More like the falling back variety, where it's just really damn difficult to hold wheels on this stuff. The smart teams -- or at least the ones with enough resources -- have a cobbles ace to pace their main guy to safety. Cancellara got Andy Schleck across the stones safely in 2010 (though IIRC Frank Schlecked himself out of the Tour). Contador had no trouble. I bet Nibali, a fine all-rounder, will emerge OK. Talansky and Froome have cobbles guys to help them, clearly having gotten the memo four years ago. Mollema too. Valverde rode them himself in the spring, and really, is there anything he can't manage? So... it's not clear who's most endangered on the stones among the GC guys. I guess we'll just have to watch the stage to find out.

Stage 5 wine Note: between this wine and the Cav tribute wine earlier, I'm feeling a little like I am dooming the riders with my choices. I couldn't resist. For today's cobbled stage, I have a wine from Luxembourg. Feel free to insert your own Schleck joke here.

Clos de Rochers Auxerrois: Very pale white, muted nose, has some richness. Floral notes, along with some fruit. Not going to be the wine of the Tour, but pleasant and drinkable.