A Classic changes it's shell.

Share All sharing options for: San Seb: The Txirla Preview 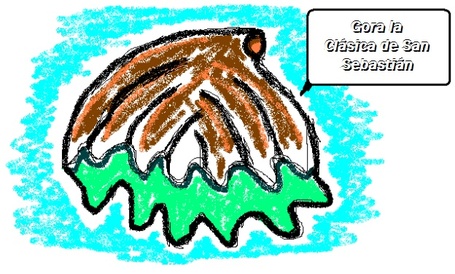 Let's  not beat around the shell: look at the profile 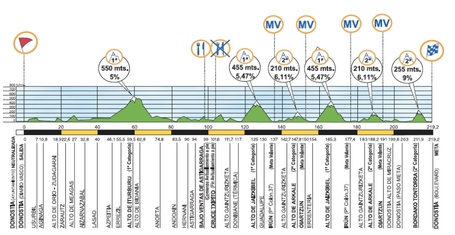 Very interesting. But take your time! Look at the whole thing and not just the tail! Patience rewards so many times. And in this race profile we see:

- The race has been shortened.  Last year the race was the standard length for the best of the Classics: 240km. This year? Just a shade over 219. What does that tell us? Standard Classics races (think Flanders) are 240+ km in length because attrition is an important factor in deciding who wins. This year though, the San Seb race organizers have thought out a bit more the context that their race fits into. More on that in a bit.

- There is also a new early climb which leads the race to it's highest point, the Alto de Iturburu after just 59 kms. It's not the steepest climb in the race but it will discourage the climby-challenged from entering.

- Then finally, the big wowser: just a tinch more than 7km from the finish the new Bordako Tontorra climb tops out: just 2,5 km in length but averaging 9% with three sections hitting 20%. Will, we're not in France anymore.

So why the changes? What's all this mean? Besides serving up a nice treat for J-Rod?

To put it plainly, cycling is done for the year. People are starting to look at their cyclocross machines.The road cycling calendar now starts with preseason races in Australia, picks up in the Middle east, stretches out it's wings in Italy, France, and Spain, reaches takeoff velocity with the spring cobbles Classics, maintains cruising speed in the Giro, then finishes off with the fireworks of the Tour where besides crowning the race winner and probably rider of the year, new contracts for riders are worked out, new sponsors for teams are decided upon, and other end of the year business happens (parties). The Tour is cycling's equivalent to the Super Bowl, the Champions League final, and the World Series. It brings down the curtain. Sort of. Like every major sports finale, the fans are left wanting more and cycling obliges with the post-Tour criteria where the races are decided ahead of time and the riders get a little extra scratch over their contracts for "racing". It's all good.

What's that you say? There more races? Just watch How The Race Was Won of last year's San Seb to see what Cosmo Catalano feels about the post-Tour.  Poor Cosmo can barely keep awake.  I am not being cynical in saying that there's really only one important race after the Tour: the World Championship road race where the teams that have been together all year are split up and reconstituted according to European nationalistic fantasies that have served the world so well...okay I'll stop being such a tool. But seriously, all the races post-Tour have the same problem: keeping people's interest. And many of them aren't succeeding.  The Giro de Lombardia is a Monument in name only what with the way it is being moved up in the calendar-Monuments have the race calendar scheduled around them. Paris-Tours is fading. Emilia is almost gone, GP Ouest France-Plouay needs UCI money to keep operating, Paris-Brussels is not even called that I think. Maybe. Who cares?

Oh definitely there are some fun races, races that seem to be effervescing: Poland, yes definitely. The North American races sort of, maybe. They seem to have hit a plateau though it is nice that Alberta seems on the way towards that plateau. What those North American races need is coherence, sort of like the cobbles races: start with Race A (Omloop) and build to Race Z (Flanders and P-R).  Let's hope they get it. Otherwise they are glorified post-Tour crits.

But really if you look at these post-Tour races they feature as winners an awful lot of riders who didn't win much at the Tour or before. It's like a grand second chance for much of the peloton, and I'm including the Vuelta which can have some awesome racing.

That brings us back to a clam's favorite race: San Sebastian. Given that many of the riders immediately after the Tour are taking it easy in the crits elsewhere, what is this race to do to attract interest? Just doing the standard Classic thang just isn't cutting it. Watching this race in years past you can see that each time riders, good climbers who should be seriously contending are letting humps like Arkale defeat them where just last week they were flying over much more difficult obstacles.  San Seb was a race where good domestiques got their chance at glory. Like Gallopin or Lulu or Barredo. (Ii still don't know what Kreuziger hasn't won this race like five times already.)  In a very real way San Seb is in the same predicament that the Tour Down Under is in: they want a real race but the riders don't want a super hard course that's 240+ kilometers.  They'll just stop. But having a race that ends in a bunch sprint a week after the Tour finished on the Champs is not the way to go anymore than the TDU having each stage be a sprint. No one would watch.

So instead of looking back at the Tour and the spring cobbles races, this year's San Seb is looking ahead at the Vuelta which is now known for a) it's short stages and, b) it's first week ridiculous stage ending walls of 20%+. Since San Sebastian itself is by the beach the wall needs to be before the riders enter town: Bordako Tontorra. Might as well try spectacular.

At any rate that's the logic for this course. Hope it does bring eyeballs, not that a clam knows what eyeballs are of course. ;)

Which riders should we look for then?

Here's the startlist. Look at the climby guys here. J-Rod and Valverde. Those are the  obvious picks. But since the final wall is only 2.5km it is possible that guys like Bakelants might stand a real chance. The big thing to see is if the peloton stays together leading up to the final climb or if they, like in past San Sebs, just lose interest by the second time up the Jaizkibel.  It's always fun to see a new course in action and with the added unknown of not knowing which riders have gotten over their post-Tour hangovers, this race is truly hard to predict. Maybe Sagan will take out his frustrations here. Or Meersman, fresh off his Wallonie win. Frank Schleck could surprise us all. Or a kid like Mikel Landa. THAT would excite the locals. And me. Your faithful bivalve.