ENECO Tour: Is It Getting Hot In Here?

Conclusions from a day of heavy racing

Share All sharing options for: ENECO Tour: Is It Getting Hot In Here?

ENECO is here!! Such a wonderful time of the year...

Today Omega Pharma-Quick Step's Zdenek Stybar nabbed a brutal sprint over Belkinnen Lars Boom and Sep Vanmarcke, launched from some sort of ridiculous distance as a counterattack to Boom accelerating. It's odd to see these guys battling for a sprint stage, but a) they can, and b) there was a desperate shortage of what you'd call "sprinters" at the front of the race, following a wet, slippery stage that saw the peloton broken up quite a bit. Tom Boonen was arguably the only guy people use the word "sprinter" to describe sometimes, but people are wrong when they do that, and anyway Boonen was supporting Stybar, the overall winner last year, on this day.

Stybar is just frickin strong. The acceleration was reminiscent of an attack the likes of which we've seen him make in 'Cross, where you hit the gas, somehow get past Sven Nys (or at least hold his wheel), and keep it up for a good 30 seconds to make it stick. Stybar's attack was so strong that Boom, a rider with the same strengths, got in his slipstream but could do nothing more. Another way of putting it is that Boom, who had already just accelerated and might have burnt his matches a moment too soon, inserted himself between Stybar and Vanmarcke, who had not burnt his matches. Bad move, though understandable as the race thundered into Boom's home town. And anyway, at that rate of speed, these moves aren't exactly thought-out decisions. 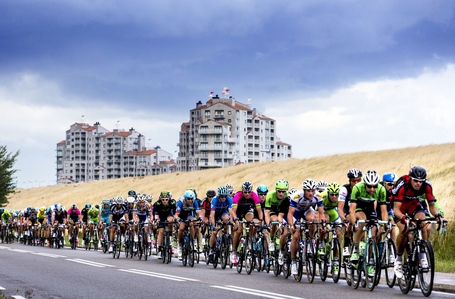 Rain, wind and road furniture always make for an interesting day in the Low Countries, and my top pick to win -- Tom Dumoulin of Giant-Shimano -- had one of those days to forget that classics racers all suffer. A puncture in the business end of things left him and his team chasing, down by a full minute to the peloton as the race wound down. I'm not seeing quotes from him yet, but somehow, as cameras panned to his chase group giving up, Dumoulin had actually gone ahead on his own, putting his fair time trialling skills to work, and managed to shave off most of that minute while making contact with the main peloton -- now split in two with the smaller pod of stage-hunters off the front. How, I can't quite say, though I suspect the peloton slowed down up front after pinning back Pavel Brutt and two other breakaway riders, and the wet conditions may have made the bunch a bit more cautious through the wet turns and cobbles than solo Dumoulin had to be. Anyway, he saved his race. 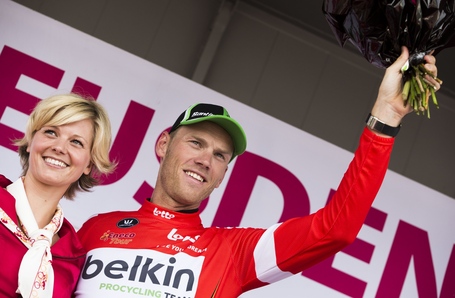 The ENECO AWESOME TOUR (all needs to be in caps, I think) moves on to Breda for a prologue-length time trial of 9.6km. Here's a map (I won't bore you with the profile): Not terribly technical, and I see no indication of cobbles or other problems. Just a pure power thingy.

Which is great, because the startlist sure did seem heavy on cobbled classic guys, and I guess the teams know what they're doing, because so far this race has belonged to the strong and hearty. Stybar was the strongest today, and is a good pick to be in the mix for a while. You really can't rule him out on either the La Redoute or Limburg stages. I'm done betting against Stybar on anything less than a major mountain pass.

Much of the attention today was around Boom, who could be seen with his girlfriend Nike Timmerman and daughter Kee on hand (he has two kids, the other not quite a year old), since the stage finish was likely within walking distance from home. After the race Boom was honored by civic leaders in Vlijmen with a cobblestone, in honor of his brilliant win in stage 5 of the Tour de France. It's fun to see Boom being so frisky, he's an exciting rider when not too tired to launch attacks (as he often seems in the actual classics). OK, I'm biased. But today was action-packed with Boom leading the way.

I can't find anything much about Boom's transfer to Astana; maybe his public has always assumed Belkin were on borrowed time so his move was foreordained. There was some speculation at De Telegraaf about Bauke Mollema taking a stab at the stage today, as if that told of a splinter in the team, but Boom shot that speculation down. Mollema too is off to greener pa$ture$ at Trek, but I dunno, these guys all grew up in the sport together, I can't see them hating on each other all of a sudden. Team infighting is usually among riders who maybe didn't belong together in the first place.

Anyway, Boom, sitting a mere 1" back overall, is a top pick for tomorrow, but Stybar cannot be underestimated. Niki Terpstra sits a mere 16" back and has won the Dutch crono title before, so perhaps he can clean up anything Stybar doesn't. Fabian Cancellara is here, so you've been warned. Alex Dowsett can crono, as can about half a dozen Australians on hand. David Millar's farewell tour continues, albeit without much form. Should be interesting.

A few interesting names down the GC list... In last place is American Evan Huffman, of Astana. Not sure what manner of misery befell him -- crashes? -- but I was interested to see what the kid has in him, and so far, that would not be "good luck". Good legs? Yeah, not sure about that either, since he hasn't raced much at the top level this season. But with GC out the window, there are still stages for him to show what he can do. Also seeing their GC hopes fade would be Bjorn Leukemans, Nick Nuyens, Reinhard Janse van Rensberg, and many more interesting folk. Should do little to dampen spirits in the Muur Friday though.

And Now a Word From Our Sponsor

Welcome, starting tomorrow, to the Oranje Cycling Project, a joint venture between Michael Boogerd and his teeth Eric Breukink. A presser is scheduled in Breda tomorrow where we will learn more, such as who will do the riding, and at what level they hope to be racing.