As Keil Reijnen crossed the finish line in Aspen yesterday with arms stretched towards the sky, he kicked off the fourth edition of what is becoming one of North America's most distinctive races. This year, organizers are mixing old and elements with some shorter stages and the race's first summit finish.

The first stage of the USA Pro Cycling Challenge took just over two and a half hours to complete - shorter than most upper level amateur road races in the United States. The 98 kilometer opening stage isn't the only one to mix up the traditional formula of long stages over tall mountain finishes this year. Stage 3 is a relatively short 140km, the Colorado Springs circuit race the following day is a mere 113km, and the final stage into Denver is only 103km long. Only two stages cross the 162km / 100 mile mark and the longest stage of the race is today's 172km long Stage 2.

When the spring classics are 230-260 kilometers in length and many grand tour stages are in the realm of 200 kilometers, the never-ending stream of short stages in a UCI 2.HC level stage race is an oddity.

Perhaps the organizers of America's second biggest stage race have been watching the Tour de France, which has increasingly had shorter stages in the mountains in an attempt to prompt aggressive racing rather than have a day-long slog with the only action coming in the end. When the Tour has included shorter stages, it has made the racing more intense with attacks from contenders for the overall win attacking each other on the penultimate climb of the day or on more innocuous seeming stages. Breakaways have fought harder to get away and stay away, enlivened by the prospect of finishing in four hours or less rather than metering out effort over six punishing hours. From interviews with riders before the Pro Cycling Challenge started, it seems the peloton is planning to use the short stages in Colorado this week to do the same.

Shorter stages aren't the only innovation in the Pro Cycling Challenge this year. What am I talking about?  Well, this comes to mind... 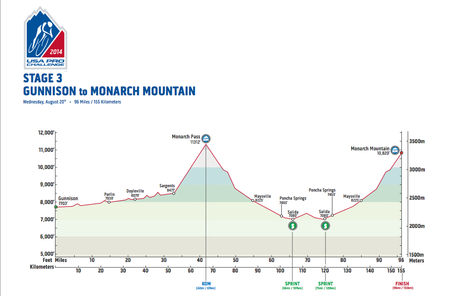 This would be the first mountaintop finish the USAPCC has been able to host. Though it has had climbs aplenty in years past, logistical challenges - including storied national parks' reluctance to host stage finishes - have prevented the race from having any climb at the end of a stage that is more than a few kilometers in length. Instead, the racing has been decided on climbs near the finish and, especially, in the Vail time trial that returns on Stage 6 this year. But now? We have a proper summit finish at a gasp-inducing 11,300 feet of elevation. Yeow. The route for Wednesday's Stage 3 climbs over Monarch pass before taking on two 15km loops through Salida before climbing back up the other side of the mountain, giving lucky spectators on the side of the road the opportunity to see the race twice on the mammoth climb.

Some parts of the race will stay the same, as you would expect from any successful event. The 20 kilometer time trial up the valley in Vail will help shake out the overall classification, but it will have less of an effect than in years past thanks to the summit finish days before. The race finishes with circuits in downtown Denver this year and the short, steep uphill finish on Moonstone Road in Breckenridge is back. Paired with shorter stages, this year is shaping up to have a lot of aggressive racing and not a lot of sprinting, particularly with Peter Sagan not returning to race.

Though the parcours looks excellent, the race is still struggling to thrive as a mountainous stage race coming a mere month after the finish of the Tour de France. In years past, Tour winners and podium finishers have come to race but were clearly on their way back to form after a post-Tour break. This year, the start list is once again peppered with riders who finished in the top ten overall in Paris, but how many of them still have legs and motivation to fight for victory is unsure. Tejay van Garderen and Leopold König are here, and the former will certainly be motivated to fight to win his home race for the second year running. Van Garderen won last year on the strength of his time trial in Vail paired with some aggressive and heads-up racing earlier in the week and has never finished off the podium here, even when he finished fifth in the Tour. Also here as potential candidates for victory are Michael Rogers and Rafael Majka of Saxo-Tinkoff who have three stage wins in this year's Tour de France between them. Majka just won the Tour of Poland as well, so he seemingly has not slowed down, which could make for an interesting battle.

Aside from Tour de France stars, Tom Danielson of Garmin-Sharp is here and looking to win after winning last week's Tour of Utah. Danielson has come close to winning here before, finishing third last year. Odds are we are looking at a fight between him and van Garderen for the overall honors, but hey, surprises could happen.