Your Vuelta a Espana start tomorrow, in its newly traditional TTT-ish way

Share All sharing options for: Vuelta Stage 1: Altogether Now... [And some notes!]

Completely flat team crono of the prologue distance -- I will keep saying this even though it's technically incorrect, not to be a jerk but to project the sense I have that this is basically a sprint as opposed to something requiring precise organization and a disciplined approach to pace-setting. I have already ridiculed the stage map, but just in case, here it is again. 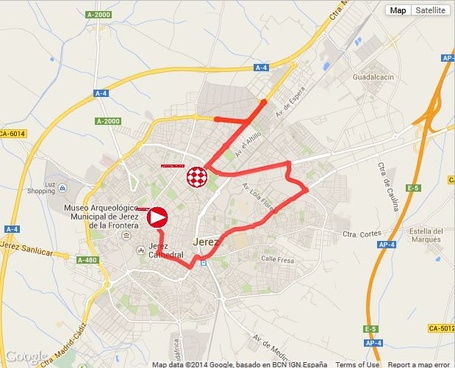 OK, OK, those are probably 180-degree turns, not dead ends. So perhaps this is ever so slightly technical. In such a short race, every second counts... for stage honors. What it means to the Vuelta? About as much as a prologue. There, I said it again!

Like the guys who hoard cases of Yoohoo! for future generations, the Vuelta seems to have assigned itself responsibility for preserving the prologue-ish team crono for history's sake. This is the fifth consecutive opener in that format. How have the past ones fared, and what should we glean from them? Let's take a peek.

Verdict? I suppose it gave HTC and Liquigas a sense of purpose, but they were going to develop that anyway. The time gaps were meaningless once you eliminated Mosquera. That said, Xacobeo Gailicia lost by 26", meaning 16" was donated by Mosquera's team to Nibali. So I guess one could get excited over that.

Overall Winner: JJ Cobo, by 13" over Chris Froome and 1.39 over Bradley Wiggins.

Verdict? Strangely enough, Geox and Sky finished second- and third-to-last on the TTT, separated by one second... Sky must surely have had a crash or some other mishap. Otherwise it defies logic for Wiggo and Froome to finish so low. Given that, one could argue that a proper start for Sky might well have put Froome onto the top step. This is way more interesting an exercise than I expected when I started typing.

Overall Winner: Alberto Contador, Saxo Bank, by 1.16 over Valverde and 1.37 over J-Rod. Nobody else within 10 minutes. Contador's team finished 14" down on Movi in the first stage.

Verdict? This stage was roughly double the length of its predecessors, but had little impact on the overall. If anything, it made it ten seconds tighter than it should have been. But it was a tight race for the win overall, so this could've mattered. Had Horner not spent stage 1 behind Fabian Cancellara.

Overall I guess these stages have the potential to randomly matter like any other stage, particularly since there will be time gaps. Mostly, though, it's a nice spectacle and a competitive event since the UCI reinstituted the Worlds TTT.

Did I say Worlds TTT? It's amazing the OPQS boys haven't bagged one of these Vuelta warm-ups yet. Tony Martin will finish faster than all other teams, and if four of his teammates can stay in his slipstream, then it's game over.

Obviously the bigger news was the exclusion of defending champ Chris Horner, thanks to a blood value (which resulted from medication he took for bronchitis, with a TUE, but blood value parameters are final). Horner has been largely ignored by me and others since this Vuelta is such a star-studded affair, and since Horner is coming off a decent Tour de France (17th on GC) and a perfectly fine Tour of Utah (2nd) it was reasonable to assume he's a bit less fresh now than he was a year ago. But underestimating Horner is not the most comforting approach to this little hobby of mine.

Apparently Chris Froome hit the deck in TTT practice. It's been a tough year for staying upright, and one starts to wonder if Froome himself is the problem. But he seems fine, and has been tabbed by no less a personage than Alberto Contador as the favorite.

Contador, of course, is sandbagging like a mofo, as he should be. Nobody mentioned in this article has the mental game Bert has for this race. His fitness will be an issue, and we've seen him come into grand tours in questionable fitness, and emerge as a winner... and as an also-ran. Who knows? Not me. But neither Nairo Quintana nor Froome should take their eyes off him for long.

This is probably my favorite pre-race article, and not just because the title is "5 Jonkies". Perhaps Orica-GreenEdge will wind up being the most interesting team in Spain?