So you thought we had a chance? No señor.

The best GT of the year with an AMAZING startlist. Well, the proof is in the pudding and now we are 5 stages in and we can start drawing some conclusions by reading from the bottom of the list. Let's face it, some of these guys we were hoping for are ........ not in it anymore.

Share All sharing options for: So you thought we had a chance? No señor.

Reading these lists is always tricky. We have a bit different expectations on riders than they have themselves and sometimes the riders we want to think are here with ambitions on GC really aren't. But anyway here's a list of the guys we can stop worrying about at this point:

Carlos Betancur + 2 million minutes behind
Well, the guy is an enigma. Supposedly here to get in shape for Worlds in Ponferrada and with 63 or 64 more Vuelta-stages in the legs he might just make it. Fingers crossed.

Thibaut Pinot + 37.47
Said he came here tired and mostly for fun. Clearly week one wasn't his idea of fun, future will tell if he is just biding his time to go seriously stagehunting in the big mountain stages or if he's just plain off.

Damiano Cunego + 30.52
I only put him is as a joke. Not really sure what the little dude is still doing riding GCs? Is he here in support of Pippo?

Julian Arredondo + 24.43
The Colombian is just in his first World Tour season and he's doing his second GT already ..... that doesn't really add up to GC-threat but still it would have been fun to see what his potential is if he tries for it. I suppose that's for next year and now all we can hope is that he has enough left in the tank to light it up in one or two mountainstages. Trek of course has Zubeldia for heroic GC efforts so they are already golden.

Merhawi Kudus + 24.29
Another kid who is probably just here for experience and one or two mountain assaults. Still, it would have been fun to see if he could have zubeldiad his way through this Vuelta too. 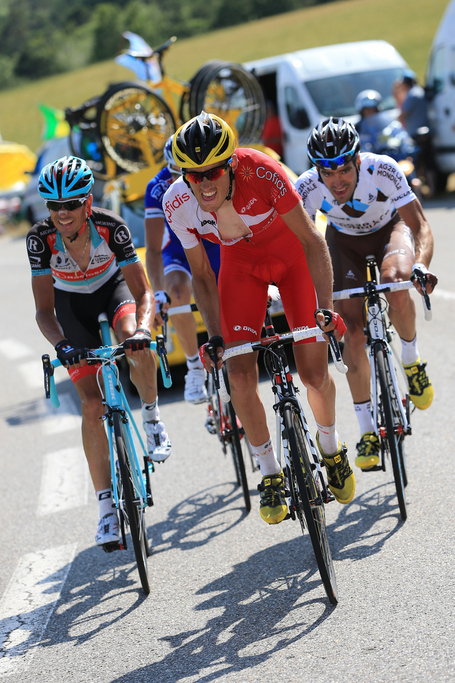 Jerome Coppel + 13.12
Is Coppel french for "lost his way" ? What happened to the man? You'd think he'd be a factor in something, somewhere with the potential he had. Bretagne-Seche and anonymity next? This season is already a goner for sure.

Jurgen van den Broeck 9.37
It used to be injury and bad luck holding him back. This year it seems to be good old "not being good enough"? Perhaps the prime example that using the Vuelta to make up for what you didn't do in the Tour is a just plain bad idea.

Rohan Dennis 7.55
Swapped teams mid season to ...... help with the TTT ?That didn't really happen. Cadel and SamSan are the captains here so I suppose Dennis is mainly being smart and conservative in the first week. But still, you'd think he'd want to at least be in the race in the one GT he gets to do.

Andrew Talansky + 4.47
"I wasn't aiming for the GC." Say it 20 times and you'll probably believe yourself. The guy they call "Bulldog" going to a GT without any ambitions after the disappointment he had at the TdF ? Feel free to believe it if you will. (hint: I don't)

Ryder Hesjedal 4.15
"I wasn't aiming for the GC" So, Dependable Dan Martin was supposed to be Garmin's sole card in this Vuelta? .........Ja, I don't think so. Hesjedal is increasingly looking like a one-hit-wonder too and it's not a great look. Especially not when he's wearing those godawful glasses.

BUT. That was just the chaff. Luckily there's plenty of wheat left.

There's a bunch of names that were thrown around before the race who are out of the GC but unlike the Tour they are all still around to go for stages and other minor objectives, they're not lying in a ditch with three broken collarbones. So we can still get some mileage out of them. More importantly, none of the really big names have faltered or crashed out at this point. All the bigguns are still in the running and with tomorrow's minor mountain challenge we'll get an indication if Contador is really as good as his first days, and the confident actions of his team, have indicated. If he is, we are still in for a humdinger of a race.

Also, if some names have fallen by the wayside then there are a few others who are clearly up there aiming for a good GC. Orica's Esteban Chaves is green and could easily have lost himself in the scuffles of the first day but he is where he should be. As is Robert Gesink who's condition is a bit of a questionmark. Belkin could actually find themselves with three strong riders in this race between Kelderman, Gesink and ten Dam.
Youngsters Warren Barguil and Fabio Aru are also around promising to factor in the GC and Cannondale's Damiano Caruso has me curious. He hasn't had many chances to do himself justice and I wonder if he actually want's to do something with his last showing for Cannondale before he moves to BMC? You can't help but think that a guy who has just had a Vuelta result would be less in danger of getting relegated to eternal domestique-duty on a star-studded BMC. The guy isn't going to  be tied down by any duties he can't ignore these last two weeks and he could do himself a lot of good with a result.