The first summit finish of this year's Vuelta a España came early and it was Alejandro Valverde who emerged victorious as the general contender wheat got separated from the chaff in a surprisingly thorough manner.

Just a short climb on the agenda today, but it was a steep one that induced plenty of hurt. The climb itself was only 4.6km at 8%, but almost all of that was in the double digit percentages thanks to a flat spot in the first kilometer. So, ouch. But still, 4.6km is a short climb and few expected significant time gaps to emerge today. So, when hostilities began in earnest halfway up the climb thanks to the infernal pacemaking of Movistar's Alejandro Valverde and big names like Dan Martin and Wilco Kelderman started going out the back, things all of a sudden got real interesting.

Joaquím Rodríguez started hostilities by making a move with 700m to go that briefly got him some daylight, but he was joined by Valverde and then the trio of Chris Froome, Alberto Contador, and Nairo Quintana. The group of pre-race favorites wasn't playing around and started putting sizable time gaps into the chasing would-be contenders. Rodríguez kept the pace up but it is always hard to beat Valverde's finishing kick in the last 100m of a summit finish and the Movistar man hit the line with enough room to sit up and celebrate. The final shakeout saw Froome finishing second and Contador third with Quintana lagging behind as the pace really heated up. But, Quintana has admitted to be lacking the race intensity in his legs and is aiming for a peak in the second and third week of the race, so losing twelve seconds here shouldn't worry him much. Valverde, on the other hand, is clearly running his Tour de France form for all it's worth and expects it to fall as the race goes on, though the question of how long he can stay in the leader's jersey is unknown. Behind, Fabio Aru , Esteban Chaves, and Robert Gesink seemed the best positioned to fight for spots 5-8 on the general classification, but three weeks is a long time and lots more can change as we hit the second half of the race.

A slumber-inducing sprint fest or day for the break? Things look tame, but the final 15km rise at an average of 2% with some steeper ramps in there so it could be another stage that makes Michael Matthews to lick his chops. 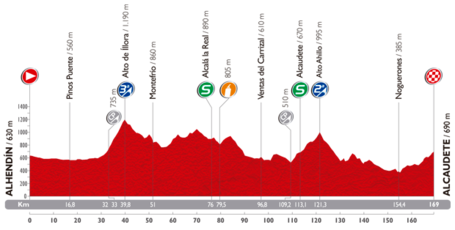