Share All sharing options for: Vuelta Weekend Double-Stage Preview: Wait For It...

This is how I originally described this stage:

Officially dubbed the "Most Boring Stage" of the 2014 Vuelta, it's a long, transitional slog to a town known for its September fair, an "undeniable attraction" according to the race website. Go ahead, try and deny it.

And I'm not changing my mind now.

Who's It For? The Sprinters. I guess that's news, insofar as it's not likely to favor the breakaway artists, since they just had their day. That's a gross generalization, but it also has something to do with the unbearable flatness of being this stage. It's a few guys' power against the peloton's, and there will be enough interested people in the peloton to take this one back.

Prediction: Nacer Bouhanni. Singing as he crosses the line. 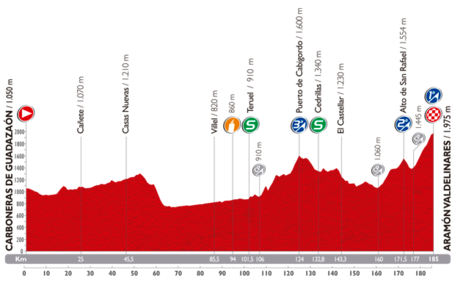 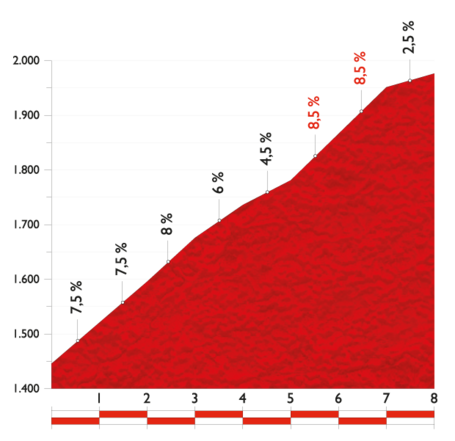 Not gonna kill anyone, but at 8km it's a bit more of a push... though at 6.6% average and a max at just over 8, it's not clear anyone of the big contenders will get clipped here. Having been on an island (literally and figuratively) all week, I can't say from observation what was learned Wednesday when Valverde seized control and Don Nairo coughed up a baker's dozen of seconds. Short steep climbs can turn into sprints which don't favor the plodding climbers who then gain back minutes on some much longer ascent. Every stage has its own character. But this is a power climb, which probably makes it even faster, and even worse for Quintana. He's second overall, behind his teammate, so it's not exactly like he's worried. But this is the last stage before he gets his doors blown off by Chris Froome in the time trial on Tuesday. So yeah, moving up, not down, is the order of the day.

That goes for a lot of guys... but with that rest stage, it could just as easily go for Froome. He can at least cover attacks (if he's not terribly inclined to launch them), and perhaps be the last man standing at the line -- improve his position, and then swing his hammer. Methinks that's his best strategy. Build up a decent lead, and defend.

But I'm sure he has his own ideas, legible only to those who can read the secret code in his power meter.

The PIck: Joaquim Rodriguez. Hey, one of these bursts has to mean something, right?