Because You Asked -- Nay, Demanded! It's the Viewers' Guide to the ENECO Tour!

Share All sharing options for: Because You Asked -- Nay, Demanded! It's the Viewers' Guide to the ENECO Tour!

There are seasons within the cycling season, and then there are Seasons. Now, of course, is Dear God I Have to Keep Racing? Season, one marked by giddiness and exhaustion that comes with completing the Tour de France, or ... well, the opposite of those feelings, which comes from not completing the Tour de France while many of your teammates, countrymen, rivals and sworn enemies have. Cycling, for a couple weeks, is somewhat significantly bifurcated along this clear(ish) line, and it's a great thing, because there are oodles of UCI points to be plucked from low-hanging branches. It's a great time for guys in Group 2 to say to domestiques in Group 1 "Enjoy your little champagne party and your five points for finishing Le Tour while I pad my contract demands with points, glorious points." Or it would be anyway, if cyclists were all five years old. 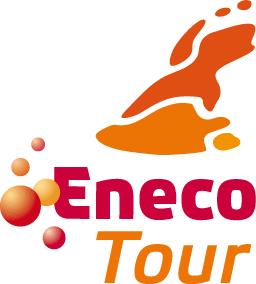 [*N.b., no offense to five year olds was intended by this opening lede.]

Anyway, you're looking for advice as to which stages of the World's Best Race, the ENECO Tour, you should watch. The answer, of course, is all of them. This is going to be one of the great ENECOs in a history of great racing. Honestly. More on that in a sec. But in the meantime...

Here's how to determine which stages are most important. Let's say you had the following in your fridge:

and you were wondering which stage to match up with each offering. Well, I'm here to help. It's what I do best.

Wassup? Lovely little romp around the Zeeland countryside. Should be plenty of farmer's fields, windmills, and unexpected road furniture.

Who's On It? Sprinters galore. So far the startlist is pretty incomplete but Nacer Bouhanni comes in as the favorite, until Luka Mezgec gets in his way at least.

Pairing: Lemonade. When life gives you lemons... I'm sure this stage will be pleasant enough, but I don't expect it to be exciting at all. Probably for the best.

Wassup? Suburban circuits around 's-Hertogenbosch, one of those great Dutch cities that looks like a typographical error. Still in southern Holland. Still very flat.

Who's On It? The race seems to end in Vlijmen, home to one Lars Boom, former ENECO Tour winner. But Boom isn't on the startlist, either due to the course changes, his energy expenditures at the Tour, or Belkin not wanting to work for points for a guy who's off to Pajamaland next year. So back to the regular sprinters.

Pairing: Oranjeboom. Such a shitty beer. So little to get excited about here.

Wassup? I thought prologues were at the beginning? And also completely out of favor? Shows you what I know. This stage will help shape the GC, at least as far as removing it from the sprinters' hands, for the time being. Historically ENECO has come down to some pretty narrow margins, and I guess that would be the theme of this stage too. Which makes it a poor fit for this year's ENECO. In essence, the pure cronomen are being told here, come chase your stage and then go home. Your 15 second gaps won't save you in the end.

Who's On It? Fabian Cancellara is on the startlist, and he loves a nice amuse-bouche. But he hasn't been in great shape this summer, and 9.6k won't feel like a real race to him. Tom Dumoulin, second overall last year, will approach this stage with some excitement, though like Cancellara it won't buy him the time gaps he will need later. Obviously Zdenek Stybar will come out flying, and one of the power classics guys (Boonen, Vanmarcke, etc) might be able to blast out a result here.

Wassup? First of the "Belgian Cycling is Awesome" Criterium Series. Basically, the race stops by all of the most famous terrain from the spring, mocks it briefly by pointing out how warm and sunny it is by now. And they're not wrong. They're just... assholes.

Anyway, this is the Gent-Wevelgem stage, where the riders start in Koksijde, spin around West Flanders far longer than anyone wants. And of course you know that means a sprint is in the air, til someone takes it  away.

Who's On It? I'm gonna go against the tide here and pick a classics guy to steal a win from an unsuspecting peloton. Maybe Langeveld... he could use one.

Pairing: Jupiler. The most Flemish stage gets a comforting Flemish classic. 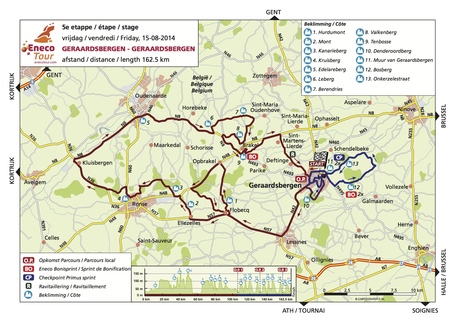 Hopefully these maps will embiggen properly for you. This is your mini-Ronde van Vlaanderen, with a couple sections of cobbles, with names I don't recognize, and an array of Flemish Ardennes climbs, headlined by the Muur van Geraardsbergen (hold me). Three times. (I said hold me!). And the Bosberg, Kruisberg, Valkenberg, Leberg, Berendries... thirteen different climbs, with some circuits to bring the day's action up to a full 19 climbs, or two more than you can expect next April. The key is the finish halfway up the Muur -- now a regularly recurring event, with plenty of space to accommodate large crowds. Belgians, of course, know that this isn't de Ronde, so whether they need so much space is debatable, but whatever. Great racing will be a must.

Who's On It? Hm... someone from Omega Pharma-Quick Step. Tom Boonen could use a summer splurge, but Stybar is the defending champ, and there will be enough selection on this course to bring out all the GC hopefuls, which don't include Boonen. Still, all he knows how to do here is hit the gas. Look for Cancellara and Sep to make moves, and for Pozzato to maybe follow.

Pairing: Westvleteren XII. Hey, the idea is what stage will be most worth watching. Unless you're all about the GC, this is that stage, hands down.

Wassup? Next in our Belgian Cycling Is Awesome Criterium Series is a Liege-Bastogne-Liege mini-event, not unlike the prior day's activities. Well, most of the course will be unrecognizable to fans of La Doyenne, as the riders come down from the north before joining up with the business end of LBL, before embarking on a circuit that summits the famous La Redoute twice (plus the nasty Cote de Niaster) before one last half-trip up the famous road to the line. 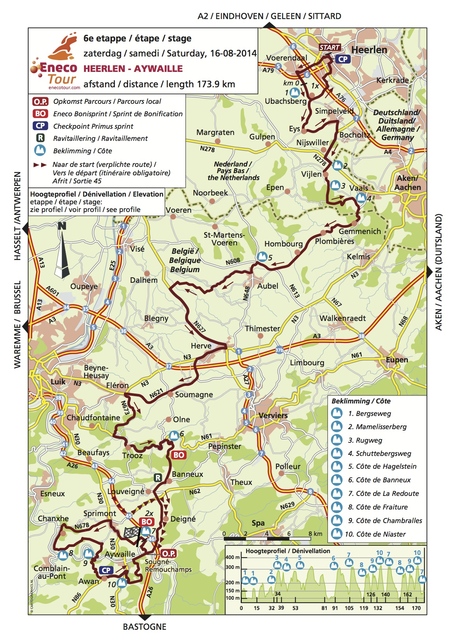 A total of ten different rated climbs, with 16 marked ascents in total, plus some less heralded up-and-down. Just a hard, hard day in the saddle, sandwiched between other hard days. This is no classics nostalgia tour, it's a beast of a race.

Who's On It? Only the very strongest. Not quite sure who that is, since the startlist has a way to go. Dumoulin is one name to watch but a fit Bauke Mollema could do something here as well.

Pairing: Rochefort 10. Dark and exquisite, worth savoring all the way. Remember when I said stage 5 was the one to watch? Eh... don't quote me on that. This should be a fantastic day. I am canceling all plans to leave town or even talk to my family. 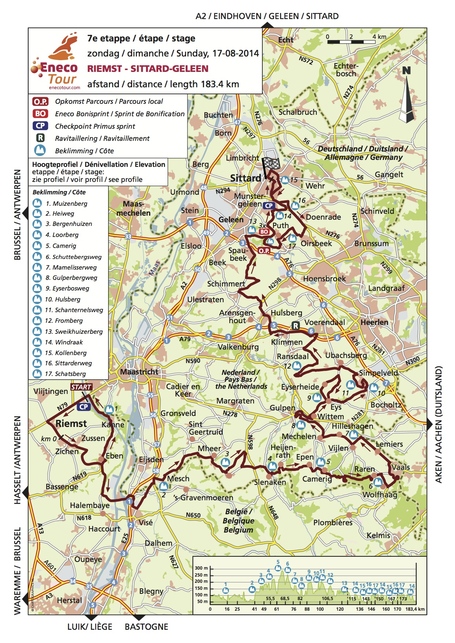 Yep, it's Amstel Gold Day at the ENECO Tour to finish things out. It's cool that they're re-running three of the biggest classics in the world. But... over three consecutive days?? The 2011 was the last time ENECO emphasized the Ardennes much at all, and that was a tough race (won by Edvald Boasson Hagen), but it was nothing like this. There was no Flemish Ardennes maxi-stage mixed in. La Redoute didn't show up til last year. It seems like the ENECO folks have been tinkering for a few years, picking out stuff that worked, and have compiled an ENECO's Greatest Hits version of the race. We'll see how it plays out -- they may be asking too much of the riders to battle it out over these three tough stages in a row, and the action might fizzle out earlier than one would hope. If not though... wow.

Who's On It? GC contenders. Dutch guys. Climbers. Anyone and everyone who has a card left to play. One thing about holding the race on hallowed soil is that it's hard for riders not to give it a go.

Pairing: Chimay Blue. Just a hunch that the previous two stages will be so great that they can't be topped here. If the GC is a tight battle, however, I may stand corrected. And with the Chimay, at least you'll have a second glass's worth to get you all the way over the line.