Yes yes... it's the one time trial of great significance of this soon-to-be-awesome Vuelta a España. Speaks for itself. But... what the hell is this thing? 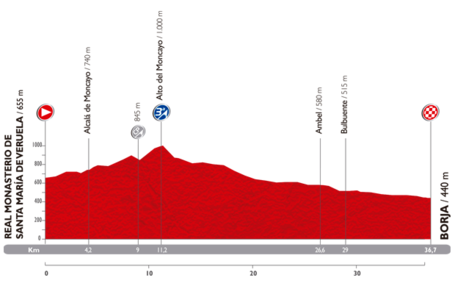 The course appears to gain about 350 meters (net) in the first 11km, including a single rated climb to the Alto del Moncayo, gaining 150 meters in 2.2km, or roughly a 7% average ascent. The Moncayo Massif is a pretty impressive piece of rock, but the route here only goes a short way up one flank. I'm sure GuillermoJ can tell us all about the preferred approaches as well as the beer selection at the summit, but he's busy riding right now. Anyway, the race then goes down... and down and down. The entire course is a net altitude loser, though very gradually in a manner that suggests it's more of a false flat than anything else.

A little dissection time... Let's start with last year's final ITT at the Tour, the Embrun-Chorges stage. It was 32km and a bit more climby, but not entirely dissimilar: 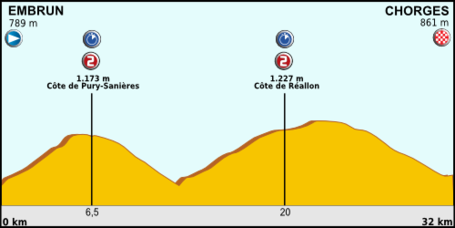 OK, well half-similar. Since that Tour featured pretty much all the same guys as this Vuelta, it's worth noting the stage results:

I'm sticking with Froome, but not by a large enough amount to matter. My guess is he is not first at the time check that they damn well better place atop the Alto del Moncayo, but he makes up time. Nairo loses the jersey to Contador... but again, just by seconds. None of this will matter much in another ten days.