What Is It? The silly MTF stage. Basically, anyone hoping to hop over a rival who's within a handful of seconds will be tempted to try something on the final ascent of Monte Castrove, outside Pontevedra. But it's fool's gold, a 4.6% climb. If you're high up on GC at this point, it's because you do 4.6% climbs in warmups.

How Is It Interesting? It's not. It thinks it is, but it's not.

Our I mean, the twice up the same climb thing is kinda cool - it offers the GC guys a preview of what's to come, places to attack, etc. And for the roadside fans, it's G-O-L-D. But as Chris said before this whole shebang even started, it's a molehill of a mountain, not the type to really find anyone out. At least not with that average gradient. But with Froome and Valverde separated by mere seconds, it could be a place to watch a battle for the second step of the podium.

Our Pick: Alejandro Valverde. Chris Froome is breathing down his neck and there are precious time bonifications for the top three riders across the line, so watch Movistar bring back the break and try to set up Valverde to take a sprint win out of a select group of heads of state. Very few people can sprint at the top of a mountain like he can. Plus, most of the last km is gradually downhill, so it's unlikely anyone with a slight gap over the final pitches will keep off chasers. 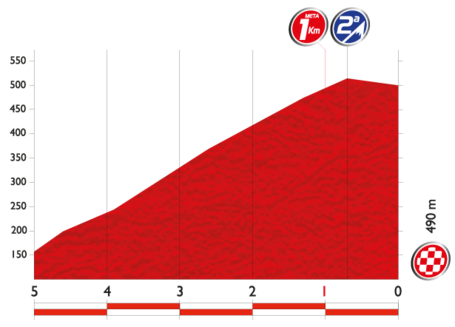