The real story of the day? Dario Cataldo is just fine.

Lotto-Belisol's Adam Hansen ditched the peloton on a small incline inside the final 5km of today's stage of the Vuelta a Espana to win alone, ahead of points leader John Degenkolb and the remaining sprinters. Hansen's win helps salvage an otherwise quiet Vuelta for the Belgian squad, and bolsters what's been a solid summer for the team, with two stages at the Tour de France and overall success at the ENECO Tour. Given what they are, that's not too shabby. Hansen in particular is a popular rider and his solo dash set Twitter afire with glowing reviews. Nice win.

But the real story of the day was an image that passed by almost impossibly fast, but was missed by almost nobody. On the descent of the Alto Monte Faro, a poorly-surfaced and tricky downhill, the moto camera caught a brief image of Sky's Dario Cataldo lying just off the road, seemingly unconscious, left behind by the speeding peloton and the media as well. For the rest of the stage, there was simply no further information. Thankfully, the story eventually emerged that Cataldo slid out when his rear wheel lost traction for whatever reason. He was conscious, and back on his bike. He finished the stage upright and was taken to the hospital to check for a concussion.

Thankfully we will only be left to debate the issues of poor road surfaces and riding while concussed. Both are serious issues -- think back to Chris Horner completing a Tour de France stage he couldn't remember riding in 2012. But count me and presumably others among those feeling waves of nausea subside upon learning that Cataldo was "only" maybe concussed.

Cycling is unique among all sports in mostly beautiful ways, but one terrible one as well: the risk of death during competition. I don't want to recount the entire grim list (and there's a much longer list of deaths related to cycling but outside competition), but suffice to say we nearly all remember Wouter Weylandt and Fabio Casartelli, the two most recent fatalities in grand tours, both on descents and both coming with images of a prone rider flashing by as the television cameras sped on down the hill, chasing the race. The brief image of Cataldo lying prone on his back was all too eerily reminiscent of these tragedies.

The experience today was surreal, largely because it went by so quickly that it was long gone before anyone could process what we had seen. So too was the silence that followed -- probably a good sign, because if ambulances were called in, the media may have doubled back to cover whatever tragedy was unfolding. None was, so nobody went back. It all worked out OK. But there was no way to know until a good ten minutes after the race had ended.

Cycling tragedies are rare, if you put them up against the number of races where something could go wrong, multiplied by the number of riders involved. Every day riders are asked to do things I would never do -- I know, or "know," having raced enough to see how risk comes up on you while you're chasing the action. Obviously pro races are infinitely more risky than my hackneyed dabbling, but pro racers are equipped with infinitely more skill and an ability to shut out the concerns that could otherwise drive a normal person mad. They snake down descents at impossible speeds all the time, and don't seem to talk much about whether they were afraid. Maybe that's best kept to oneself, for everyone's sake.

Even when things go terribly wrong at the wrong moment, riders can be remarkably lucky. Just as memorable are John Lee Agustyn sliding down the Col de la Bonnette, or Bernard Hinault or Roger Riviere disappearing into a ravine. Heck, we even chuckle over seeing Frank Schleck go missing over a retaining wall in the Tour de Suisse, in part because of a sense that he is a somewhat hapless descender, and in greater part because he somehow was just fine. For every tragedy, there are so many more tales of riders falling from trees and landing on their feet, if you will.

But when we have a brush with tragedy like today, it bears mentioning how surreal it all can be. Fans of every other sport in the world are as poorly conditioned to accept death as, I dunno, we first-worlders generally are nowadays. I don't want to go too far down the rabbit hole on that latter point, but we live in a far safer world with a far greater expectation of living to old age than, say, our grandparents' generation. As to other sports, one baseball player in history has ever been killed by a pitch in a major league game, covering something like 111 years (depending on when you start counting). Death in football games is almost unheard of. Even in boxing, the entire point of which is to induce low-level brain damage in your opponent before he does it to you, death is far less common than it is in cycling. Our sport hearkens back to older times, where human health and safety was not something to be assumed. I guess if you want to compare it to life in general in, say, 1913 (when the Tour of Flanders was born), the risk of death in cycling is not extraordinary. But so much has changed in the world since 1913. And yet, so little about the risk of hurtling down a mountain on a bicycle has changed since then.

Ok, that's enough of my morbid soliloquy-ing for today. But I thought it bore some real mention, because nothing else that happened on the stage today drew anywhere near so much attention.

There's still plenty of racing left. Despite (or logically following from) my prior declaration that this Vuelta was over, it is in fact up in the air, specifically over the final 10km of tomorrow's stage. 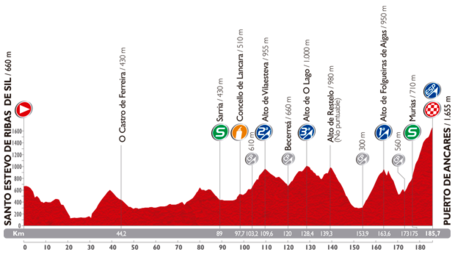 The last three combatants for overall victory, Messrs. Contador, Froome and Valverde, are closely ranked enough to envision a reshuffling, in any possible combination. Hell, a massive day from Rodriguez could change things too. But to our eyes, neither that nor a Valverde acceleration seem likely. Really, barring a change of form, it's Froome or Contador. And given their tendencies, it's likely to happen in the last portion of the stage, on the mighty Puerto de Ancares, an average 8.7% climb over 12.7km: 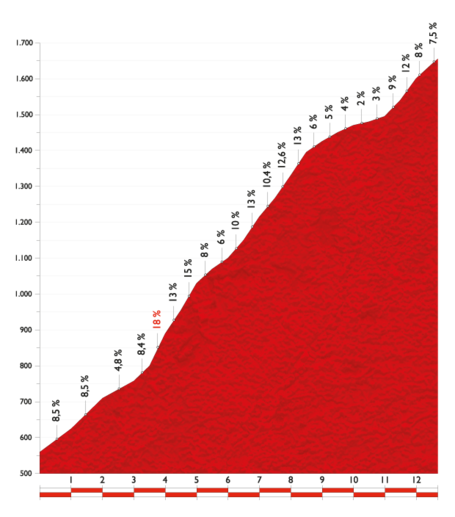 Froome has been the better rider of late, but Contador likes these types of climbs, and always seems to know how to race when it matters most. So, I don't love Froome's chances of pulling a stunning upset, but I certainly wouldn't dismiss them either. For Contador, he needs only to match Froome to the line, because Sunday's time trial is a mere 9.7km, and while Froome would be favored to take time on the day, he won't take much from the likes of Contador. But should Froome cut his deficit in half, or less, then it's game on Sunday. Should Froome take the jersey on stage 20, he has likely won the Vuelta.