Can you smell a World Champion?

The Vuelta is over, the Tour of Britain is over, the Canadian races are done and dusted, all the roads of preparation for the Worlds are now converging on Ponferrada , Spain. And we're starting to get a sense of who might be there at the pointy end of that race. Here are some names that passed the smell test.

Share All sharing options for: Can you smell a World Champion?

Simon Gerrans
Obviously. You don't win two challenging one-day races, just before Worlds, as convincingly as he did without painting yourself with giant target on your back. Now some know-it-all from ursula's band of number-crunching poindexters will jump in and point out how you have to ride the Vuelta to be a contender because so and so many of the last champions have and all I can say to them is "poo" and "double poo to you Sirs". Of course you don't. Look at the diverse ways riders prepare these days for big races. Some benefit from racing a lot, some can train into form and win right from day 1.  Gerrans' canadian adventure combined with some good tapering in the weeks to come will make him a super-candidate for Ponferrada.

"Belgians"
I know strictly speaking "Belgians" isn't a name or a rider. But just looking at their roster as a unit you have to marvel at how many strong cards they have in their deck. It's no secret that the Ponferrada course has gone through the usual description pattern. First it was spoken of as a hard climbing course and then gradually as people have reconned it and studied it on site it has been downgraded to a fairly simple course with hills that aren't too bad and nothing that will tempt the stronger climbers."Slightly harder than Madrid" is what I believe Italian selector Cassani described it as? In that light the Belgians come carrying heavyweight guns. They have hardmen with strong sprints in Boonen and Vanmarcke, climbier, in-form chancers in Wellens and Vanendert and lethal puncheurs Gilbert, van Avermaet, Bakelants and Meersman. No one, and I mean no one, can even come close to that range of options. On an open, uncertain course they could have the opposition running in circles trying to figure out what moves to cover even if they figure Boonen and PhilGil are the designated captains. Especially since they are all looking on form. If you're not afraid of this squad you're just lacking in imagination.

Peter Sagan & Fabian Cancellara
Yes, the two giants who just appeared to be rolling through Spain on a casual charter-trip, seemingly with little energy or gusto. Yes, those guys. Ignore them at your own peril. These guys are two single minded weapons of mass destruction who have probably had only one serious goal since they got out of the showers in the Roubaix-velodrome: the Worlds road race. And they are on target too, expect them to come in devastating form to a course that suits them both to a t.

Ramunas Navardauskas
Sure the guy will probably succumb to poor support in a race where the big guys have all too many cards to play but the guy has a weird ability to sneak into the important moments in big races. And he keeps sprinting well in company you would never expect a guy like him to shine in.  He's looking like the goofy outsider at this point. 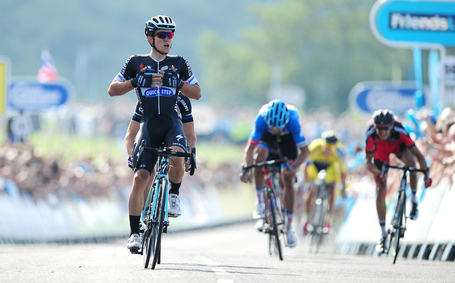 Michal Kwiatkowski
Is anyone betting any money against the guy in any race this year? He's like a less heavily marked Sagan (unless Sagan's Spanish sandbagging-holiday actually worked in which case the whole peloton is dumber than a bag of hammers).

Alexander Kristoff & John Degenkolb
Montreal showed that enough accumulated climbing might just be one of the few chinks in the armor of the outstanding Big Race rider of the year. The Ponferrada course with no long pre-circuit approach but instead more laps and more passes over the not-too-intimidating climbs might just be his undoing in the end. The same might go for the German Vuelta-dominant but if the course is as forgiving as some have indicated these two could be the ones going head to head for the win in the end.

Matti Breschel
Just kidding! You didn't really think I was going to go there did you?