Does Anyone Think Jens Voigt Will Set the Hour Record? [And a Live Thread]

Share All sharing options for: Does Anyone Think Jens Voigt Will Set the Hour Record? [And a Live Thread]

Tomorrow, or today if you're not in that sliver of the Earth where it's still technically Wednesday, ol Jens! a/k/a ShutUpLegs, will attempt to set the Hour Record in Switzerland, the final competitive act in a career spanning over two decades. Voigt, now 43, has retired from racing, but always a showman, he intends to go out with a bang, and with one remaining testament to his career of perseverance. And perseverance has largely been what it's about -- a German on foreign teams, soldiering on through turbulent times, rarely seeking glory because he was tasked with helping someone else, but when he went for it... man, did he go for it.

Which is why it's cool to see Voigt attack the Hour Record: he's a long-distance soloist in the body of a mass-start road racer. If nothing else, the Hour Record is a test of mental toughness -- Merckx called his 1972 record the hardest effort of his career -- and Voigt is, if nothing else, very mentally tough. And charming, funny, media-savvy, a little too well-publicized. But mentally tough as old leather. 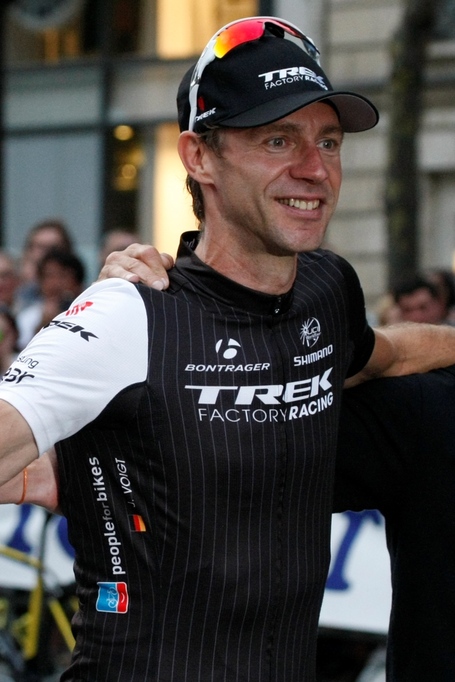 I'm a little weary of the "shut up legs" stuff, but it was funny for a while. Funnier still is the time Voigt went with Oscar Pereiro on the rather significant breakaway that eventually got Pereiro named the winner of the 2006 Tour, and as Pereiro was maybe gonna come past Voigt in the sprint for the stage after Voigt had led the break all day, Voigt swore a blue streak at the Spaniard, one of the few sprints in history won on purely vocal strength.

Anyway, back to the Hour Record. Part of what's going on is a possible reclaiming of the record by a regular roadie. Old guys like me get to write a substantial part of history, and in doing so, we will claim that the record was part of road racing lore, an offshoot from the mass-start scene, and an ultimate test of mental and physical determination. Merckx and Moser were the two great Hour Record holders, before the Brits got involved using silly bikes and whatnot. Of course Chris Boardman is hardly a track guy, having completed in several Tours de France, even if his specialty was prologues and short time trials. And his final Hour Record was on a standard drop-bar bike, like Eddy's. Ondrej Sosenka is too obvious a doper to take his record seriously, having been busted twice and ostracized from the sport. Moser's record, meanwhile, was on all the funky gear, so in reality it's Boardman and Merckx above all others whom Voigt will chase on Thursday.

Too bad, because Moser holds the Veteran Hour Record, the 1994 version that saw him ride 51.84km in an hour at age 42. But by then, bikes looked like this: 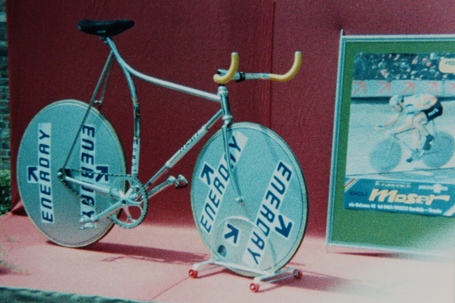 Presumably Jensie won't top that record, lacking the aero advantage. So maybe he's shooting for the veteran drop-bar Hour Record. Something like that?

Anyway, if you have any insight into whether he's going to succeed, feel free to pass it along my way. Me, I see a guy who, on his strong days, on a day where everyone else is suffering, can overcome. But  is tomorrow that day? Color me skeptical.