Vuelta Stage 11: No Rest For the Weary

Share All sharing options for: Vuelta Stage 11: No Rest For the Weary

Another recent Giro formula, the short stage to a single, but rather difficult, MTF. Full profile: 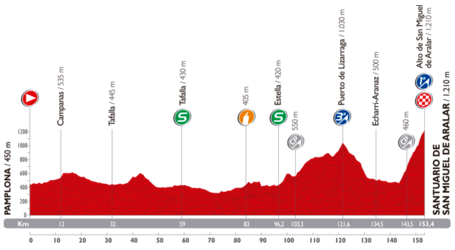 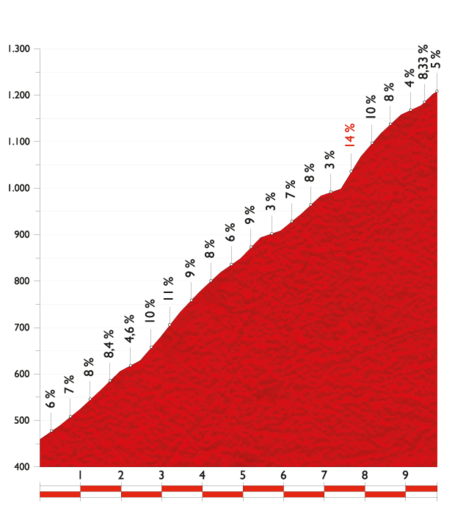 Pretty nasty stuff. The climb averages a tidy 7.5% for ten km, which is certainly a bigger deal than anything we've seen to date. Still not by any means the key point in this Vuelta, based strictly on the parcours, but with Alberto Contador's two main rivals on the ropes, it might wind up having more influence over the final result than one would have expected. Nairo Quintana just got done bouncing off a guardrail, and while he showed himself to be among the top 2-3 guys in terms of climbing fitness earlier in the weekend, he's got enough bumps and bruises to make tomorrow a dangerous affair for his already wounded prospects.

Oh, and this is in the Pais Vasco, which means the top of the mountain will be a swarming mass of screaming humanity and waving ikurriñas. If you hate cycling, this probably isn't the stage for you. Everyone else? Don't miss it.

I think we can dismiss the breakaway. Chances are it'll be made up of riders who look fine on a bike, until about that first 8% ramp. Contador has very little help, so perhaps the control of the race will get passed around by default and a break will be given too much rope. But there should be plenty of excitement nonetheless, as the Bigs will reach the final climb ready for battle (usual caveats apply). Contador has looked frisky, and frankly I still have some questions about his ability in the higher mountains -- the two short MTFs we've already seen are literally nothing compared to what lies ahead. So he'll want to grab every second and shred of confidence he can, while he can. I'll say he wins with Valverde hot on his heels. Anacona will hopefully remain the pleasant surprise, along with Rigoberto Uran, of the race. Quintana will struggle to limit his losses and remain relevant. Is that enough of a prediction for ya?