Rabo vs lulu for Worlds Supremacy

First event out of the gate at Worlds, the Women's Team timetrial, might be one of the most hotly contested races as well. At least it is the one with the most clear-cut rivalry. The dominants of the past years Specialized-lululemon will be trying to hold of the challenge of a Rabo/Liv team that has dedicated much of their season to ousting the Spec-lulus from the TTT-throne. On Sunday we will see if they can.

Share All sharing options for: Rabo vs lulu for Worlds Supremacy

The Worlds team timetrial is an odd-ish event. It's a trade team event as opposed to all the other events, it starts off the Worlds before we've really gotten in the spirit of the event and the TTT isn't an event we see that many of during a season. For the women though it is an event that many teams take very seriously for natural reasons, it's potentially the event that will give them the most mainstream coverage in the entire season.

First off let's establish one thing: this is a two-horse race. Barring disasters, only Specialized-lululemon and Rabo/Liv have a chance of winning this. Behind them there is a fairly open race for the bronze medal but it would take a small miracle for anyone to threaten the big two.  Spec-lulu have been the dominants in the TTT discipline ever since Cervelo disappeared. Before that, the two teams had a rivalry (where Cervelo came out on top more often than not) that probably honed the lulus (then HTC) skill and determination to master the event. Since 2011 they have been largely unthreatened with big motors such as Teutenberg, Neben and Arndt anchoring their teams. When the big names disappeared the TTT ability didn't go with them but instead new names have stepped in and shouldered the responsibility. In this years Vårgårda World Cup TTT, the biggest event next to Worlds, the speculation was that we would see a weakened squad but instead a more homogenous team with multiple strong motors were more convincing than ever before. The team will start the same six riders this weekend.

Rabo/Liv (and it's earlier incarnations) have always had strong riders but have always had too many other priorities to  really pay the TTT too much attention. This year has been different with Vos & Co explicitly targeting the TTT and also individual timetrialing in a way they never have before. Probably when you've won everything else you are looking for fresh challenges to keep your motivation up? Results have been predictably impressive with the kind of names that Rabo have to work with. Still, in Vårgårda they were soundly beaten by Spec-lulu causing most people to conclude that the americans will be unbeatable in Ponferrada despite Rabo's best efforts but it might not necessarily be the case.

The course in Ponferrada is not unsimilar to Vårgårda with a relatively uncomplicated first part and a challenging uphill in the final third of the race. Ponferrada is slightly shorter but the trickier downhill to the finish will pose a problem for teams running ragged near the end. 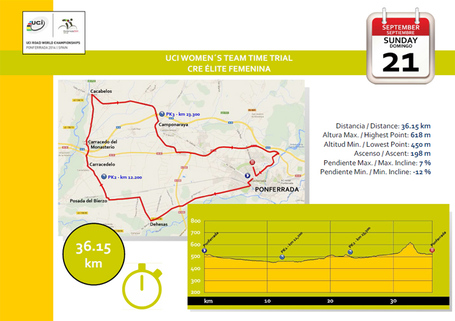 Both Rabo and lulu have skilled teams but the tricky finale could work in favor of a Rabo squad with some brilliantly technical riders. Included among those are Pauline Ferrand Prevot who was missing from the Vårgårda squad. That inclusion could help even the balance between the two teams. In the end we could see the race come down to a fight between stronger team-cohesion and stronger names on paper. Whether Rabo have been able to close the gap form-wise in the month since Vårgårda will also be a factor. Spec-lulu were on fire that weekend but Rabo may have been more focused than the opponent on peaking for Worlds? With Spec-lulu crashing in their recon ride on Saturday time will tell if this had a determining impact on the outcome?

Behind the top two the other big teams have all been weakened somewhat since Vårgårda so it's hard to see them becoming threats. Boels-Dolmans have lost Megan Guarnier, Orica lost their big engine Shara Gillow and Giant will have to do without Kirsten Wild. Only Bigla have an intact team and if they can prove that Vårgårda was no fluke we could see them in the fight for bronze.  The US teams should do well too, especially United Healthcare and Optum are very ambitious and have some strong TTers as well. Along with RusVelo these are teams that will most likely raise their level compared to what we've seen before from them, due to high ambitions and also having fewer riders that are riding the event with one eye towards next weekend. For the full startlists of the teams go to cyclingfever.

The Team Trial will be aired live on the ucichannel if you don't already have another provider in your country. First team is set to roll off the ramp at 10:00 CEST on Sunday. Start-order here (pdf).