With everyone's eyes on Vos, Armitstead and Johansson it was the most improved rider of the season, frenchwoman Pauline Ferrand-Prevot, who continued her golden season by clinching the Rainbow jersey in a sprint-finish. TT gold-winner Lisa Brennauer finished like a bolt of lightning to take silver ahead of a disappointed Emma Johansson in third.

Share All sharing options for: Ferrand-Prevot is World Champion

Following the pattern of the previous races the women's race was a bland an un-eventful affair until the last 2 laps. A big crash early on dominated events as many were forced to abandon while many others were involved and had wounds to lick. Pace was slow and teams were unwilling to waste energy on a course where the race would inevitably be decided in the final lap anyway.

And come the final lap, fireworks is what we got. As tame as much of the race was, as explosive and uncertain the finale was. It was the Americans who first tried to activate the race. Powers had attacked earlier to force the pace up and on the first climb on the last lap Evie Stevens opened up the race with an acceleration. This strung out the field and the massed the stronger riders toward the front and we saw a few tentative attempts but nothing that got much room as the dutch helpers used their last energy to lead the field at high speed into and onto the final climb. With a high pace that only caused selection at the back it looked as if the group would go together onto the descent to the finish. In the latter third though Emma Johansson played her card though with one highpowered attack that drew out the leaders. When she was reeled in Armitstead injected a second shot of pace, creating a lead group of four with Vos, Elisa Longo Borghini and Johansson who just held on over the crest of the climb.

A chase group formed with the dropped riders behind but they looked beaten as the four pressed on on the descent. Johansson tried to slip away but Vos was having nothing of it and soon sewed the gap closed. Longo Borghini tried an attack but once again Vos was attentive and the others gladly saw her do the work to make it a small group sprint. Just inside the final kilometer-mark it became apparent that due to no one willing to co-operate at the front the German-led chase-group containing sprinters like Bronzini and Olds were going to join the four in front for a big sprint finish. Ratto opened up first, drawing Vos out into a long sprint, too long as it turned out. Behind them Johansson, Ferrand-Prevot  accelerated more timely  as did Bronzini who had to come a long way around to escape a box-in. Ferrand-Prevot had the perfect free line and enough speed to hold off Johansson and a hard-charging Brennauer who also got a bit lost as the sprint started and had to make a late comeback. The un-believing French supertalent broke down in tears when it became clear to her that her finishline instinct was right and she was confirmed as the winner. 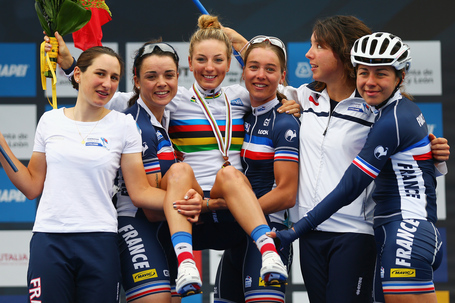 After a World Cup win in Fleche Wallonne and a second place in the Giro this was the perfect climax to the roadseason for the talent who has been called "the next Vos" due to her dominant junior results and ability to win in multiple disciplines. She now holds national and international titles on the road as well as in MTB and cyclocross.