A Short Primer on Why Cyclocross is SO AWESOME

Share All sharing options for: A Short Primer on Why Cyclocross is SO AWESOME

I have my knobbies on. I've been looking over this weekend's course map [query: how do you execute a 120-degree turn in sand?]. I even did some road racing last month, to approximate the full-body oxygen debt I will be facing starting in three days. And I haven't been so excited about cycling in months.

Yep, it's just about 'Cross Season.

Mind you, I as an American get to say such things. In the Proper CX World, a/k/a BeNeLux countries (minus Lux and the northern half of Ne), CX season is christened with the launching of the Koppenbergcross on November 1. Not the Saturday or Sunday closest to November 1. November 1 means November 1, Tuesday or no. September is most definitely NOT cyclocross season. But in the US, there are some important dates on the calendar fast approaching, not just for Seattle-area hacks like me. America has become the Tour of Qatar for 'Crossers, e.g. a place to get in some race miles early enough in the season when a) you don't have anything better to do and b) the jet lag will be long gone by the time you start actually caring about results. America also has the benefit of its still-big-pockets, a market full of super-consumers who might watch a race and decide that they need a Ridley Crossfire for their half-mile weekly bike commute. So bike companies are either already here, or are pleased to stop by for a high-profile event. Interbike and Cross Vegas are in September, which is more than enough of an excuse.

OK, so why is 'Cross so awesome? 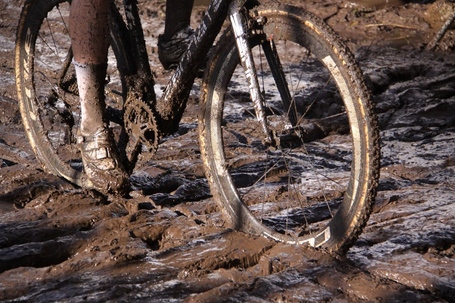 Deep mud. It's fun to flop around in. It's fun to see guys covered in it. Don't hear what I didn't say. I meant as part of a bike race. Nothing more. Anyway, riding through it without making an ass of yourself requires a mix of skill and power. So the guys who do well in it? Pretty impressive. And pretty cool to watch. 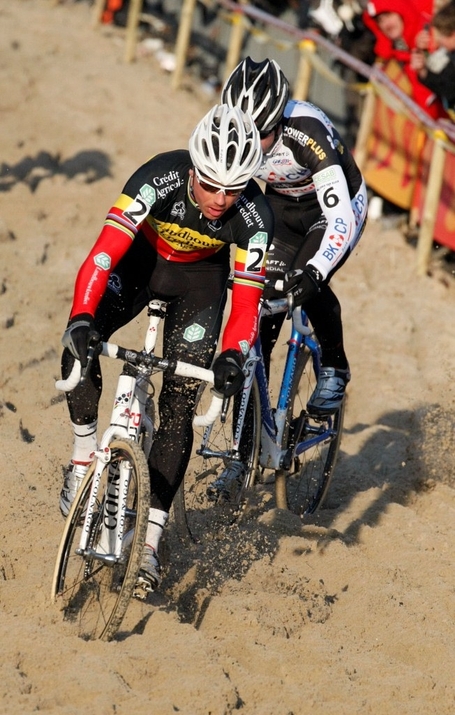 Like what I said about mud, only much trickier and without people getting covered in it. Guys occasionally keel over in the sand if they place any weight on the front wheel while it's doing one of its unexpected sideways jogs. The pros tend to manage it OK, but only by burning massive wattage.

Barriers. Sometimes just logs. Placed in the way, just cuz. At the pro level, they tend not to have difficulty, even bunny-hopping them sometimes, but for us wee amateurs, all sorts of stuff can happen.

Just sayin. It's for everyone. 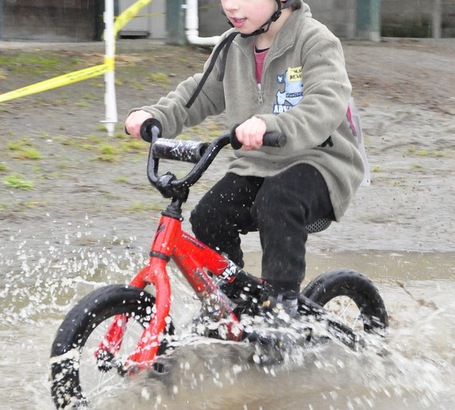 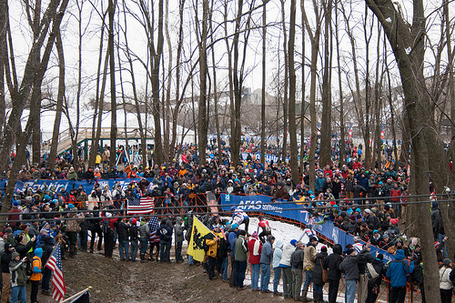 I know I'm being a bit schizophrenic about whether we're talking about riding 'Cross or watching it. Sometimes I mean both, but mainly I mean watching. And there's one way in which watching CX is superior to road: the regular and effective format into which virtually all races fit. First, they run at more or less the same time every week, mostly Sundays. Having the top races in a series assures that kind of regularity. And there are three main series for the top internationals: two in Belgium with a touch of Holland, and the UCI series.

Next are the races themselves. Whether you are on hand or by the telly, the races can be easily viewed as the courses are packed into relatively small spaces. On TV, you can count on enough stationery cameras to capture every move that matters. In person you can usually pick a spot from which you can see them pass up close, as well as keep an eye on where the front of the pack is when it's not passing by you.

Finally, the succession of events means you can stand in one place and see juniors, U23s, elite women and elite men, often all in a single day.

Virtually none of these phenomena grace the road peloton, or not very often anyway. 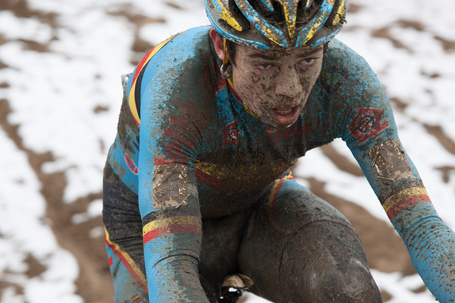 I think this is what puts 'Cross over the top. All of the above just adds up to a tremendous amount of fun. I'm sure on some level the riders and (in Belgium anyway) the fans are just as intensely focused on who wins as the road, to the exclusion of enjoying the race anyway when your guy goes down. But for my money it just isn't quite like that. There is an element of "what the hell" to having riders so insanely soaked with water and mud, or slipping on ice and snow, or tumbling down absurd declines, that forces us to both marvel and laugh at what's happening. It's a great sport, and the athletes are truly elite human specimens, across the board. And it's a hoot. Those things aren't mutually exclusive.

Join us next Wednesday evening as the CX season kicks off at Cross Vegas, which we will be blogging live.