La Vuelta Stage 14: Stuff is starting to get real

Share All sharing options for: La Vuelta Stage 14: Stuff is starting to get real

Remember the 2012 Vuelta? The one where Contador was just returning to racing from his Clenbuterol suspension and wasn't quite on his A-game, until he launched an absolute coup on Joaquim Rodriguez's lead on Stage 17 to Fuente Dé? Yeah, that one. We don't exactly let you forget that one. Contador put several teammates up the road and, with Rodrígue showing weakness, attacked some 50 kilometers from the finish, bridging to his teammates and using them before casting them off and pushing to the finish alone.

That display was a far cry from what we're used to in today's era of mostly controlled racing, and perhaps that is why this year's Vuelta is returning to that hallowed racing ground. The first climb of the day - the Coll de la Hoz - is where Contador attacked on that fateful stage in 2012. Afterwards, though, the route takes a different turn. The Hoz is much further from the finish and the terrain contains far too much flat for a similar escapade, especially the long gradual downhill from the penultimate climb to the foot of the final climb. Instead, this is a warming up of the contenders for the hellish final week that awaits them. The final climb is not too steep in the beginning, but the last 3 kilometers average 14%. And this is a light stage compared to the last week... yeah.

GC action ought to be significant, and real time gaps should start appearing here. Contador and Rodríguez appear well matched in the mountains, so the real question marks hang on Chris Froome's form - will he be consistent this stage? Or, has he had to dig too deep to make up for not perfect form in the prior stages and will he suffer for that now? 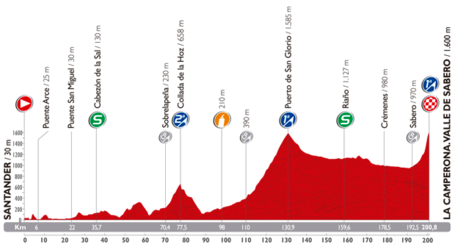 Our pick to win: Joaquím Rodríguez. What goes around comes around, or something like that, and he's due for a stage win eventually this Vuelta.