Remember how I said yesterday's stage finish, with a 10km climb averaging 14% in the final 3 kilometers, was just a warmup? This is why:

The Vuelta is taking cues from the Giro in past years and has a relatively short stage with one major climb at the end. So, we meander along the coastline for a while before heading over the Category 2 speed bump of the Puerto del Torno before hitting the big attraction. 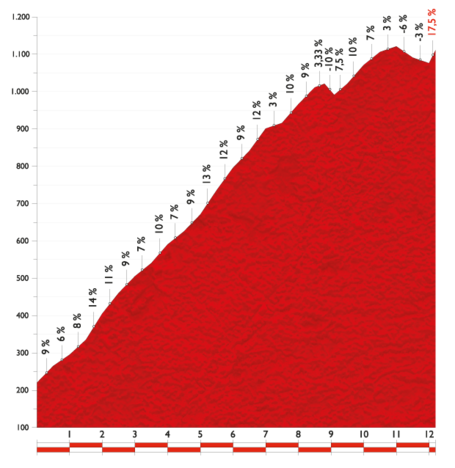 It's almost comical that the average gradient on the climb to Lagos de Covadonga is 7.2%. Really, that is no indication of how difficult it is because over five kilometers of the climb are double digit percentages, including a 17% ramp up to the line. But, average gradients account for the downhills on the way to the top too, so if you don't look at the profile this climb looks merely "Ouch" instead of "ASSASSINS". (Side note - I remember my first time climbing Hogpen Gap in northern Georgia, a 7 mile (12km) climb at 7% average. It was similar - it had a fearsome 3km stretch at 12% average gradient before a short downhill and another murderously steep section. It hurt. So I feel for these guys).

Lagos de Covadonga is a set of glacial lakes in the Asturias mountains near the northern coast of Spain and the road up has become a favored climb for the Vuelta in years past, hosting stage finishes in both 2010 and 2012. Both days a large breakaway hit the climb with a sizable margin and contested the stage win unmolested by the general classification riders. Surprisingly, the gaps between GC favorites have not been too big here before. In 2010, Vincenzo Nibali and Joaquím Rodríguez finished on the same time and in 2012, Chris Froome lost 35 seconds to a trio of Contador, Rodríguez, and Alejandro Valverde. It may be one of those climbs that's simply too difficult to attack on, or maybe the breaks allowed by the short descents at the top minimize the effect of one's weakness. Even if the GC action isn't a barn burner, it should be a good show, especially if they turn the helicopter camera crews loose to take in the surrounding scenery.

Andrew Talansky. It looks like a day for the break because there's not enough road to pull them back in and everybody will be concerned with saving energy for the final climb. Talansky has been quiet, but since Hesjedal is currently trying to strangle today's break enjoying his stage win from today, it's likely Garmin sends someone else with good climbing acumen in the break tomorrow.