Hard, harder and now hardest in the Vuelta

After two massive finishes we come to the last and hardest stage in the race-deciding trifecta of mountain-stages. It's hard not to designate this as the Queen stage of the race.

Share All sharing options for: Hard, harder and now hardest in the Vuelta

Four Cat 1 climbs and 1 Cat 2 are on the menu on the hardest day of this year's Vuelta. With more climbing and a finish that isn't quite as hard as the last two days, but still plenty hard, this is where there is an opportunity for major re-shuffling of the GC. Tuesday is a restday too so people won't be afraid to empty the tank. This is what it looks like: 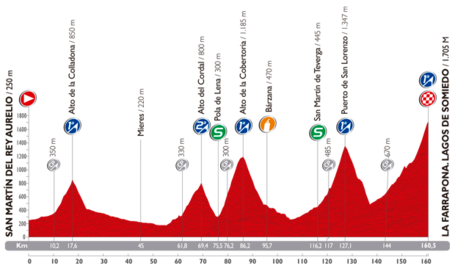 Whatever we've had before, it pales in comparison to this. Lots of climbing but still condensed into 160 km. If this had been the Giro it would probably have been 220 kilometers or something, this way there is potential for more explosive action. The major theme of course if the status of Froome. Two days now we've seen him at the back but still coming out with no major losses. Can he turn the tables in this stage or will the added meters of climbing expose his weakness, and that of his team, and finally cause him to lose time in the fight for the podium? Movistar and Katusha clearly seem to be gambling on the latter judging by Stage 15 and Movistar are perhaps the one team in this race that has the collective power to exploit the brutal course to put pressure on the opposition. Katusha have three impressive climbers but they don't seem to have the team depth that they have showed in some previous Vueltas where they have been dictating the pace at times. 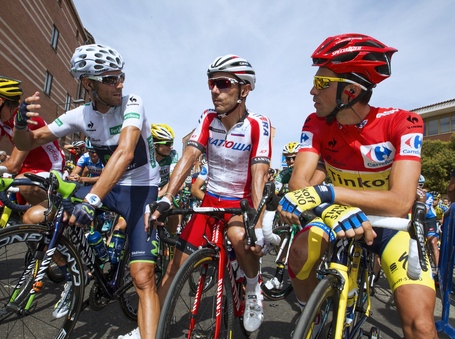 Spanish Entente?
The other major tactical question is the internal Spanish politics. Coming into this stage Valverde is 31 seconds behind Contador while Rodriguez and Froome are 1.20 behind. Looking at today it his hard to draw any other conclusion than the two trailing spaniards are only concerned with each other and Contador. Froome is not a major concern. Now the internal competition between the spaniards is not to be underestimated and while it may look as wasted opportunities from the outside J-Rod and Valverde seem intent on defending lower placings here without taking any bigger risks.  Either that or they are biding their time for the two remaining mountain stages, this one and the brutal finish to Puerto de Ancares. If it's the former then we'll have to rely n the Conta-Froome dynamic to provide the fireworks while the other two fight for the scraps.