Vote for your favourite 2015 women's kits

Now we've had the first big women's race of 2015, the Ladies Tour of Qatar, we've been able to see the new cycling kits in action. Some are the same, some are very different... vote for your favourite, talk about them and tell us your least favourite in the comments, and if you want to compare them to 2014, here's last year's voting post. If you missed Qatar, here's my collection of the videos, photos, blogs etc, so you can see them from all the sandy angles (I recommend stage 2). And if you want MORE women's cycling kit voting, head over here to check out and vote for "the best of the rest".

Share All sharing options for: Vote for your favourite 2015 women's kits

I'm limiting the vote to UCI-level teams, and the top-tier 'pro' ones at that.  If I couldn't find their site/photos easily, I left teams off (because there are only so many hours in the day) and if I'm not sure what the 2015 kit will look like, you can't vote for it, but I'll include links.  If you like any other kits from domestic pelotons, or smaller teams I haven't included, please do add them to the comments for us all to see.  All photos taken from the race websites, reached through the links.

There's a reason the team calls itself #YellowFluo, and thought the design has changed from last year, the basic premise hasn't...  maybe the added orange makes the fleuro 'pop' even more? (I know the contrast has been upped in that picture, but check out the team in this Peloton Magazine gallery from Qatar Stage 1, where their riders Annalisa Cucinotta and Marta Tagliaferro were first and third)

When the Astana-BePink split took place, this side of the team became Kazakh-registered, and just like their brother team, has that familiar whiff of controversy about them, as they're the first pro team for Hanna Solovey, infamous for her 2-year steroid ban aged just 19, who didn't race road at all last year until she won the ITT just before Worlds, and then Worlds silver.  They don't have a website yet, but it looks like maybe the kit is pretty similar to last year's?  If you find more photos, let me know!

The other half of the split, BePink are back to their Italian-based development-team roots, and into a simple black-based kit, with pink and fleuro green flashes.  I've only seen photos of the winter kit, on their facebook, but here's a mini-video of them in action.

If there's one kit you'll want to memorise, it's Bigla, back as a super-team after a couple of years as a development/growing team.  They were one of the strongest teams of the 2005-9 era, so it's great to see them stacked full of stars again. The Cervélo é is a good giveaway, and there are 2 videos of the team presentation  (They've also got some nice national jerseys there - Dutch, Finnish and South African).  Here's Sharon Laws, who was slapped by the bad luck fairy and crashed in Qatar, breaking her collarbone and sternum, and an image from their training camp gallery

The first of the orange kits, this is a small Basque team - this is the 2014 kit,I can't tell if it'll be the same this year.

We saw this kit all over the front of Qatar - I love this Peloton Magazine photo of Ellen van Dijk winning Stage 2 in it - and then Lizzie Armitstead won Stages 3, 4 and the General Classification.  The kit may have changed from last year's orange-black-white, but if 2015 is anything like last year, we'll see it all over the top of the podium in the biggest Spring Classics, especially since they'll added Evie Stevens and Chantal Blaak to their roster (also comes in Danish and Luxembourgoise versions).

Not many changes for the Scandinavian team (how Norwegian does sprinter Emilie Moberg look on the team page? And doesn't that colour-scheme suit blue-eyed riders?) - it was a shame not to see superstar sprinter Kirsten Wild stomping all over Qatar in her new kit....  but here are some photos from their recent team camp. 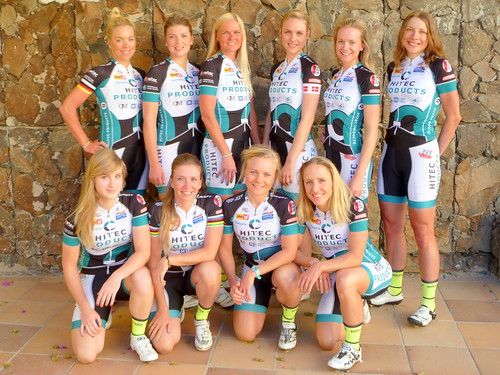 This is a brand-new team, built around young superstar Rossella Ratto, and managed by former World Champion Edita Pučinskaitė.  It's more light blue (aquamarine?) with yellow.  They haven't started the season as a team, though some of their their riders were in El Salvador and Qatar as the Italian National squad, and they do have a team launch video.

One of the smaller Belgian teams, mentored by Martine Bras, who always looked out for developing riders during her time as a Classics and attack star before leaving the sport to start a family. Blue, black and white, with the orange/red logo across the stomach area.

Last year they were Liv-Shimano, and this year the sister-team to Giant-Alpecin have a new kit to go with the new name.  They've started with some fun social media, so if you want to hear riders introduce themselves, head to their Youtube playlist - and they have a photo-gallery of them training in the gym, Q&As under the rider profiles and more.

Another Basque-based team, so more orange/white/black...   I am guessing this is the kit for 2015 as well as last year, correct me if I'm wrong.

I can't find any pictures on their website, but if it's anything like last year, the kits will be identical to the men's team's.

The little team that could!  Stefan Wyman's latest outfit has gone UCI and signed track world champions Laura Trott (who'll be in the British National Road Champion's jersey too) and Elinor Barker, and not only have they launched the team's new kit, they've already sold out of their pre-orders.  The team launch is later in February, but they have already started the social media on their site.

You just know this is going to be one of those small Italian teams when you see the number of sponsors on the jersey!  If you want to, you can buy this kit in all kinds of designs, including World Champion's, in their shop.

One of three USA-based UCI teams, with a lot of Canadian riders alongside the USA types, including current Canadian Road, ITT and Crit champion Leah Kirchmann, and they'll have the Richmond Worlds firmly in their sites, especially the Team Time Trial, after they came 4th last year.  There are no photos of the women's 2015 up on the team page, only the guys, but the women's kit is the same as the men's in the team shop, so it's safe to guess it'll be the same.  Same basic principles as last year - black, with orange diamonds on the back, but pared down and more minimalist than 2014.

UPDATE! Here's some photos of it - thanks Ali Tetrick!

@_pigeons_ @OPTUMpbKBS rocked our kits at Qatar! I vote for us:) pic.twitter.com/uauWtDngXs

We've been watching them race the Aussie summer season, and just as the team is keeping their premise of mostly-Aussies with three internationals, superstar Swede, Emma Johansson, tactician-extraordinaire Loes Gunnewijk and attack-queen Valentina Scandolara, so they've kept more or less the same kit.  You can watch them wear it in the ORICA backstage pass videos , and Vale's video-diaries, as well as in photos all over their team site (with Emma in the Swedish jersey) - and while you can't buy the women's team kit, you can buy the GreenEDGE supporters' gear in their shop.

Something different now, for this small Dutch team - lime green.  If you want to support them, you can buy their rider cards in their shop.

Same kit as last year, except the World Champions' rainbow stripes have passed from Marianne Vos to Pauline Ferrand-Prévot.  Well, that just means more opportunity to see them, as Vos is so often in race leader's, sprinter's, Word Cup leaders' jerseys etc etc!  It's the same orange/black/white with the graphic of hands passing bidons, and if you want to buy one of your own, the kit's for sale here.  Yes, there's a team presentation video, but I couldn't make this post without including their fabulous lipsynch video from their Florida team-camp - keep an eye on their site for tons more social media like that, this Dutch team are so good at it.

They may be based in Italy, but with RusVelo gone, this is a very Russian-based team.  And remember the classic brown Footon kit?  They've taken it and added curls of pink.  I don't know how to describe it, except to say you'll love it or hate it!  SO cycling!

I can't tell if the 2015 kit will be the same as their 2014 navy/fleuro green as their team page includes riders who've left - but if you want to support this USA-based team, you can buy last year's kit in their team shop.

The all-Belgian (three-Druyts) development team has a new kit for 2015, which you can see in the Qatar photos - it's still black/white/orange, but the yellow logo has changed from the version on the website, and it looks a bit more modern in design.  If you prefer the old kit, you can buy it from their webshop, where the prices are reduced.

It's the same white & blue kit as last year, and as their brother team, for the final USA-based squad of the post, with Coryn Rivera adding stripes to make the USA Crit Champ jersey (looking forward to seeing Linda Villumsen's New Zealand champion's version).  They wore it to great effect in the first UCI race of the year, the Vuelta El Salvador (photo gallery here), and in their 2015 team video - if you like it, you can buy the kit, and more, over here.

One of the most anticipated kits this year - as Specialized-lululemon, they had unique designs, and this year the main sponsor is team owner Kristy Scrymgeour's other venture, her clothing line Velocio.cc.  It's black and white still, with a red gilet, and butterfly-themed patterns, and it's available for sale in slightly different designs for women and for men. The team's wearing it in Tiffany Cromwell's first 2015 video diary for 2015, the teaser for their upcoming video series, team camp gallery and the t-shirt in the lovely team portraits.

Finally, no change for the British-based super-team....  in the kit at least, the squad has really transformed, and it's going to be a lot of fun watching them in the Classics to see if it pays off.  Orange and black (except when it's the Australian, Belgian or Japanese Champs' versions, or British Crit Champ's) and so far Wiggle have been knocking it out of the park with their videos, giving us insights into backstage at the Aussie races and Qatar, for which I'm really grateful.  Check out their youtube - and if you love this kit, with the Wiggle online bike shop as their primary sponsor, of course it's for sale!

So, which do you like best? Voting will stay open for a week and a half, and let's talk all things kit in the comments... by the time Omloop het Nieuwsblad comes around, we'll be totally fluent in team kits and more than ready to go!