Road cycling's obsession with the mountains

Share All sharing options for: Higher Calling, by Max Leonard 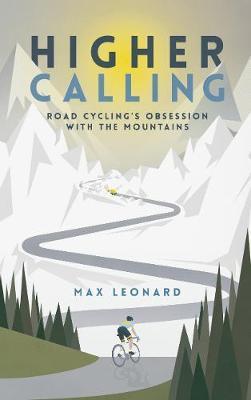 Max Leonard's enjoyable new book Higher Calling can be difficult to explain. Let me start with the publisher's description:

Why are Europe’s mountain ranges professional cycling’s Wembley Stadium or its Colosseum? Why do amateurs also make a pilgrimage to these high, remote roads and what do we see and feel when we do? Why are the roads there in the first place?

Higher Calling explores the central place of mountains in the folklore of road cycling. Blending adventure and travel writing with the rich narrative of pro racing, Max Leonard takes the reader from the battles that created the Alpine roads to the shepherds tending their flocks on the peaks, and to a Grand Tour climax on the ‘highest road in Europe’. And he tells stories of courage and sacrifice, war, and love, obsession, and elephants along the way.

The book is a series of stand-alone essays/articles tied together by a few common themes as the author endeavours to reveal "what pushes people to ride their bikes in the mountains."

While many mountains appear in the book, the Cime de la Bonette in the south French Alps is the main character throughout (2802 metres, the highest paved road in France). For example, we begin with it closed and covered in snow and finish with the 2016 Giro racing over Col de la Bonette, just below.

Another main character is the American professional cyclist Joe Dombrowski. For example, discussing race stages in Austria, Andorra, France, etc. He offers interesting insight into climbing from a professional's perspective. Stuff like the pros and cons of robot-style power meter climbing versus attacking/responding to attacks, or why it can be easier to be in a break than the peloton, etc. I enjoyed Joe's appearances.

The book begins atop Bonette with the author visiting the men that clear the snow and clean the road after a long winter. Primary research is a strength of Higher Calling. Here, Leonard doesn't just tell us that roads are closed for eight months, and it's tough work getting them open. He gets to know the individuals driving the snow-clearing machines, he climbs the mountain, and he joins them as they work. Original.

Each of the ten chapters is split into sections, often with seemingly unrelated digressions, ultimately tied together. For example, chapter eight has the author visit Dombrowski while he is training at altitude on Tenerife. We learn about the Canary Islands, discuss plate tectonics, digress into a whirlwind history of religion and philosophy relating to the pursuit of elevation, get instructed on the science of altitude training, and ultimately how all this relates to pro cycling.

So we'll read about Moses, Tibetan Buddhists, Petrarch, some 19th-century philosophers, George Mallory, a doctor, Daft Punk, and Bradley Wiggins all in the same chapter. That's a lot to digest, but for me, it's skillfully done.

Early on the book discusses the introduction of mountains into the Tour de France - plenty of history and anecdotes. Some of it is familiar ground - the word "assassin" is used more than once. But don't worry, the author quickly jumps beyond the well-known. Like much of the book, the author is not attempting a thorough telling, but - I think - trying to paint a picture through stories. It makes for light, agreeable reading.

He covers a lot of ground, but my favourite story: René Vietto, a famous French climber in the 30's and '40s, lost a toe in 1947 to sepsis. The author goes searching for the toe, rumoured to be preserved in a jar in a Marseille bar. Fabulous.

Another favourite, the interview with climbing legend, The Eagle of Toledo, Federico Bahamontes. He has a "get off my lawn" view of today's climbers but is very entertaining.

I struggled with a few sections that felt overwritten and hyperbolic. Usually regarding the pain of climbing, the sheer madness of it all, the oxygen deprivation, comparisons to mountain climbers and the such. The author climbing Galibier: "My vision darkened around the edges and the world collapsed in on itself folding like a cardboard box into two dimensions ....."

One chapter explains the origins of Strava, and introduces us to George Mallory's grandson who invented "Everesting." (Mallory, the grandfather, died attempting to climb Everest).

To Everest, one cycles the same climb over and over until the accumulated ascent reaches 8848 metres, the altitude of Everest. So if your local hill "only" has 400 metres of ascent, you must climb it more than 22 times - in a 24 hour period. Why? No idea.

The chapter becomes a deep dive into Mallory's fanatical obsession with Strava KOMs and finding the perfect hill for an Everest attempt. Unsurprisingly, the author then tries his luck at Everesting on an English mole-hill. I groaned out loud. (admittedly I'd struggle to pedal a Mont Blanc let alone an Everest). Other sections on fastest times up Col de la Madone and Strava also held little interest to me. Perhaps it's just a matter of taste and you will be more interested.

But generally, I found the book original, well-written, and worth reading. Again, the best parts are when the author writes with first-hand knowledge. My favourite chapter had almost nothing to do with cycling. A beautifully written essay on the struggles of sheep herders near Bonette trying to preserve their way of life in the face of hostile weather, altitude, wolves, and the encroachment of modern life. The author doesn't just research the topic. He meets these people. He walks and sleeps on their mountain.

I guessed early on where the book was ultimately heading: The 2016 Giro stage crossing Bonette with the author at the summit screaming support for Dombrowski, who has a chance at victory in an escape group. (There's a nice photo of Joe waving at the author while cycling past).

Exciting enough but I enjoyed the book for the endless digressions on diverse topics: A 1950 Tour de France dispute between Italians and French leads into a brief history lesson as to why the highest French Alps roads were built - from Hannibal, to Caesar, to Napoleon I and III, etc. From Iseran, to Izoard, to Galibier. A visit up to Col/Tunnel du Parpaillon (a 19th-century military road, formerly highest in France). Interviews with Giro course designers on their philosophy with respect to mountains and route design. The story behind the other Ventoux memorial (above Simpson's). etc.

For me, this is not a book to read in one breathless sitting. Instead, each of the ten chapters or essays are, for the most part, to be savoured as stand-alone works.