This week sees the start of the 4th edition of The Women’s Tour, which is fast becoming the biggest and best stage race in the Women’s World Tour. As the first stage is taking place just minutes from my front door I thought I would make use of my local knowledge and write a preview for you.

The race has become gradually more adventurous in terms of locations and parcours over the previous three editions, and this one is no different with a finish in London for the first time. Each stage will have 2 sprint points and 2 QOM points with jerseys available for QOM, Best British Rider, Points (scored at finish) and Sprints (scored at intermediates). Bonifications of 10, 6 and 4 seconds will be awarded at the finish of each stage and 3, 2 and 1 at the intermediates. 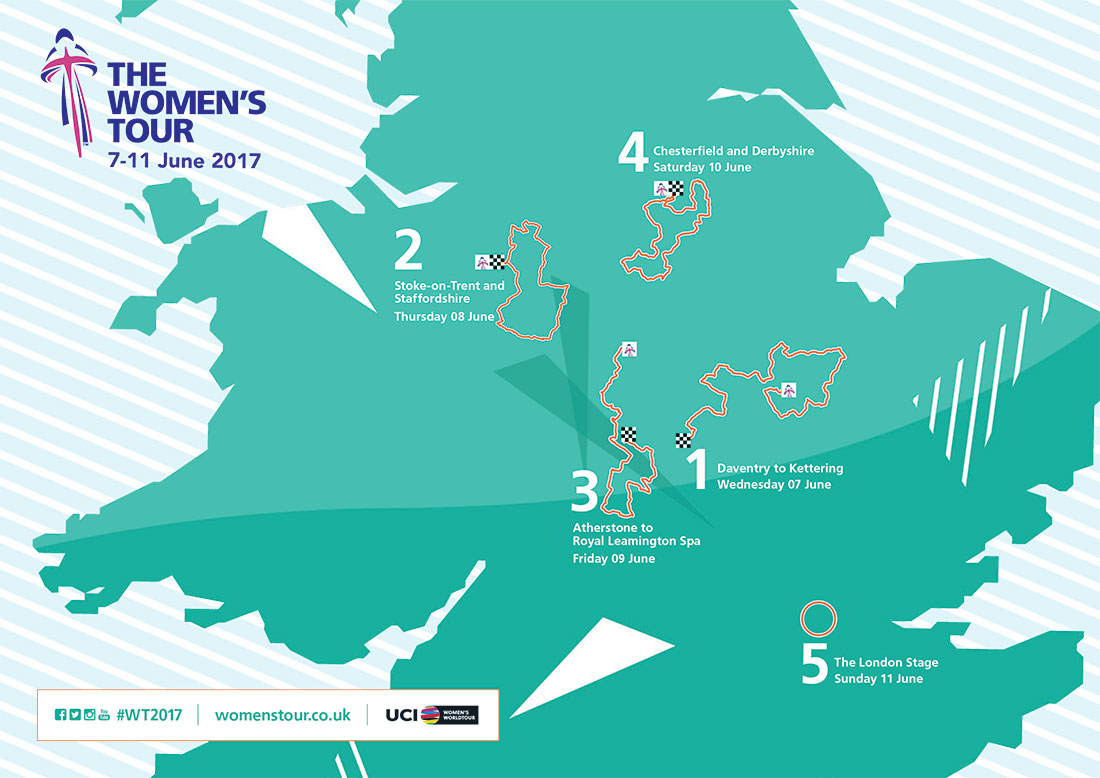 This is the fourth year that Northamptonshire has hosted a stage of the Women’s Tour. Daventry is involved for the first time while Kettering hosts a stage finish for the 3rd consecutive year, previous winners here being Christine Majerus and Lotta Lepisto. Upon leaving Daventry the stage loops around the North of Kettering and returns to the finish via Thrapston. The finish location is the same as previous years but the approach is different. Here is the map:

As I am local to this stage I know these roads quite well. The final couple of kilometers sees a fast descent to a couple of roundabouts before a short climb and a sharp left onto the finish straight. The stage itself is up and down all day but is not particularly difficult and a sprint is likely, but if someone can get a few seconds gap before that descent then they might be difficult to catch.

Granted its market charter in the 13th century, Daventry would later become established as an important stop on the coaching routes from London to Coventry and Oxfordshire to Leicestershire.

Daventry became famous for its whip-making industry during this period, and its status also gave rise to the establishment of a number of coaching houses and inns in the town – a fact referenced by Shakespeare’s Henry IV Part I, which refers to the ‘red-nosed innkeeper of Daventry’.

Kettering is home to Wicksteed Park the country’s first theme park and one of the UK’s top 20 visitor attractions. The Park, on the southern edge of Kettering, was given to the town by Charles Wicksteed. He was a wealthy Victorian industrialist, having designed and manufactured a revolutionary steam plough. Much of his wealth he donated to good causes. Here his ambition was to create a pleasure park for the enjoyment of Kettering residents and especially for their children.

Stage 2 returns to Stoke, Marianne Vos having won here last year. The city is a big supporter of cycling, regularly hosting a round of The Tour Series criteriums. There are a couple of climbs close to the end of the stage that could be a launchpad but another sprint is probably to be expected.

Stoke-on-Trent is the home of the pottery industry in England and was created by the federation of six towns; Hanley, Burslem, Longton and Stoke, together with the districts of Tunstall and Fenton. Stoke was chosen as the seat of power, despite the fact that Hanley, and indeed Burslem, had been far better established since Edwardian times. The legacy of this union lives on undiminished, as locals will refer to 'the Potteries', meaning the various towns, rather than the official title of 'Stoke-on-Trent'.

The longest stage of the race sees us visit Warwickshire, with Atherstone hosting a stage start for the 2nd time. This is another stage with a few bumps near the end but nothing that should worry the pros and a sprint is again the most likely finish.

Atherstone has a number of atmospheric coaching inns with a story to tell. The Red Lion was immortalised by George Eliot in her novel ‘Middlemarch’, whilst the Three Tuns (now Bar 43) is reputed to be where Henry Tudor stayed on the eve of the Battle of Bosworth.

The town of Leamington Spa, originally known as Leamington Priors was a tiny village until about 1800. The value of the mineral springs was known in the middle ages, but it was not until 1784 that the small village began rediscovering its saline springs and started building baths around some of them.

In July 1814 ‘The Royal Pump Room and Baths’, designed and built by C.S. Smith of Warwick at a cost of £30,000 were officially opened. The Spa treatment was claimed to cure, or relieve a huge number of disorders, examples being ‘stiffness of tendons’, ‘rigidity of the joints’, ‘the effects of gout and rheumatism and various paralytic conditions’. The Spa water is a mild laxative which is one reason why the water was drunk.

The Pump Rooms are now home to an art gallery, museum and library as well as the local tourist information centre.

A short punchy stage starting and finishing in Chesterfield and taking in the edges of the Peak District. This stage has more climbing than the previous stages (although had they taken route to the North-West of Chesterfield they would have found a few more significant climbs) and the final climb is much closer to the finish. It was this climb that Lizzie Deignan used as the launch pad to her overall victory last year.

Chesterfield is home to the world-famous Crooked Spire church. The spire was added to the 14th-century tower in about 1362. It is both twisted and leaning, twisting 45 degrees and leaning 9 ft 6 in from its true centre. The leaning characteristic was initially suspected to be the result of the absence of skilled craftsmen (the Black Death had been gone only twelve years before the spire's completion), insufficient cross bracing, and the use of unseasoned timber.

It is now believed that the twisting of the spire was caused by the lead that covers the spire. The lead causes this twisting phenomenon, because when the sun shines during the day the south side of the tower heats up, causing the lead there to expand at a greater rate than that of the north side of the tower, resulting in unequal expansion and contraction. This was compounded by the weight of the lead (approximately 33 tonnes) which the spire's bracing was not originally designed to bear.

London hosts a stage of the Women’s Tour for the first time, and does so with a Crit featuring 14 laps of 6.2km. Starting and finishing on Regent Street the rather complex route takes in some of the major sights of the capital such as Piccadilly Circus, Trafalgar Square and Whitehall. As with most crits a sprint is almost guaranteed but the technical nature of the course might make it difficult for the big sprint teams to control.

What is there to say about London that you don’t already know?

Regent Street is a major shopping street in the West End of London. It is named after George, the Prince Regent (later George IV) and was built under the direction of the architect John Nash. The street runs from Waterloo Place in St James's at the southern end, through Piccadilly Circus and Oxford Circus, to All Souls Church. From there Langham Place and Portland Place continue the route to Regent's Park.

The street was completed in 1825 and was an early example of town planning in England, replacing a number of earlier roads including Swallow Street. Nash's street layout has survived, although all the original buildings except All Souls Church have been replaced following reconstruction in the late 19th century. The street is known for its flagship retail stores, including Liberty, Hamleys, Jaeger and the Apple Store. The Royal Polytechnic Institution, now the University of Westminster, has been based on Regent Street since 1838.

Piccadilly Circus connects to Piccadilly, a thoroughfare whose name first appeared in 1626 as Piccadilly Hall, named after a house belonging to one Robert Baker, a tailor famous for selling piccadills, or piccadillies, a term used for various kinds of collars. The street was known as Portugal Street in 1692 in honour of Catherine of Braganza, the queen consort of King Charles II but was known as Piccadilly by 1743. Piccadilly Circus was created in 1819, at the junction with Regent Street, which was then being built under the planning of John Nash on the site of a house and garden belonging to a Lady Hutton. Around 1858 it was briefly known as Regent's Circus.[2] The circus lost its circular form in 1886 with the construction of Shaftesbury Avenue.

Trafalgar Square is home to Nelson’s Column. In 1838 a Nelson Memorial Committee had approached the government proposing that a monument to the victor of Trafalgar, funded by public subscription, should be erected in the square. A competition was held and won by the architect William Railton, who proposed a 218 feet 3 inches Corinthian column topped by a statue of Nelson and guarded by four sculpted lions. The design was approved, but received widespread objections from the public. Construction went ahead beginning in 1840 but with the height reduced to 145 feet 3 inches. The column was completed and the statue raised in November 1843.

Whitehall is the main thoroughfare running south from Trafalgar Square towards Parliament Square. The street is recognised as the centre of the Government of the United Kingdom and is lined with numerous departments and ministries including the Ministry of Defence, Horse Guards and the Cabinet Office. Consequently, the name "Whitehall" is used as a metonym for British civil service, and as the geographic name for the surrounding area.

As well as government buildings, the street is known for its memorial statues and monuments, including Britain's primary war memorial, the Cenotaph.

You should also watch out for the two British Teams, Drops (British U23 Champion Alice Barnes) and WNT (Omnium Track World Champion and Olympic Team Pursuit champion Katie Archibald and British Criterium Champion Eileen Roe) who have just finished the Tour Series so will be well prepared for the final stage.

Who will win? Good question. The first 2 editions were won on bonus seconds with all the stages finishing in sprints, however the addition of the Peak District last year allowed a small group including Deignan, Moolman, ELB and Amanda Spratt to pick up enough time to keep the sprinters at bay.

That stage is repeated this year so a similar result could be on the cards, but the parcours isn’t hard enough to completely rule out the sprinters if they want it. There are too many big names here to pick out any outright favourite, but you can’t look past Deignan, Niewiadoma or van der Breggen if a break gets away or Vos, D’Hoore, van Dijk or Hosking if it comes down to the sprints. Both of the Barnes sisters have been in good form this year too and will want to impress on home roads so cannot be ruled out.