Perfect weather, race close to home... all the ingredients for a great day. So I made my way to the Montréal GP with my good friend Simon, thinking we would see another Sagan win.

So obviously, first picture is the big favorite, warming up near the line. 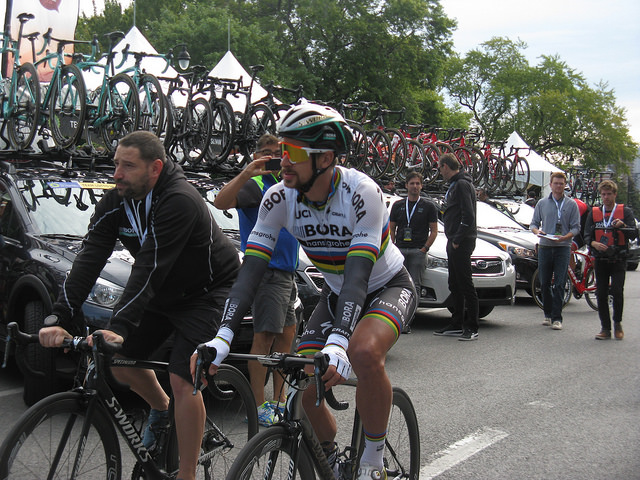 Mitch Docker was also getting ready 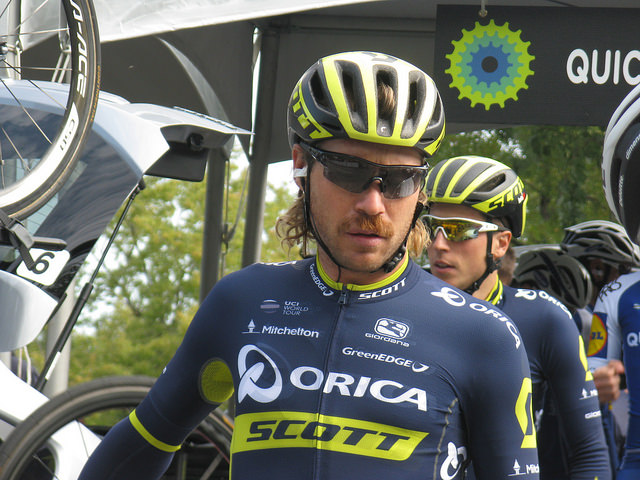 There was a group of Colombian fans right beside me, cheering loudly for each Colombian rider (watching the full race with them must be awesome). Winner Anacona stopped for a few words 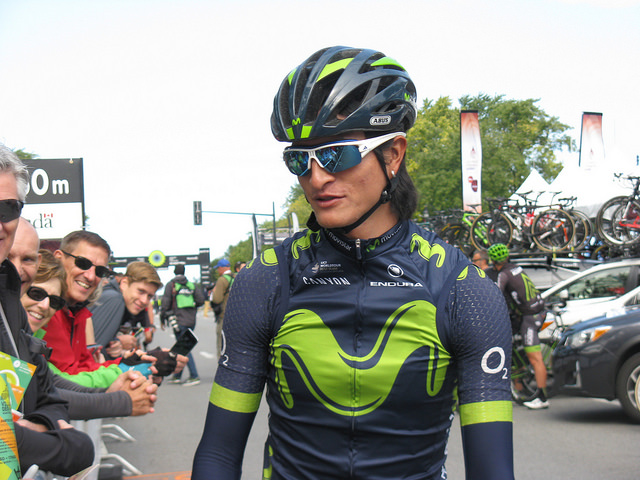 So did Sergio Henao 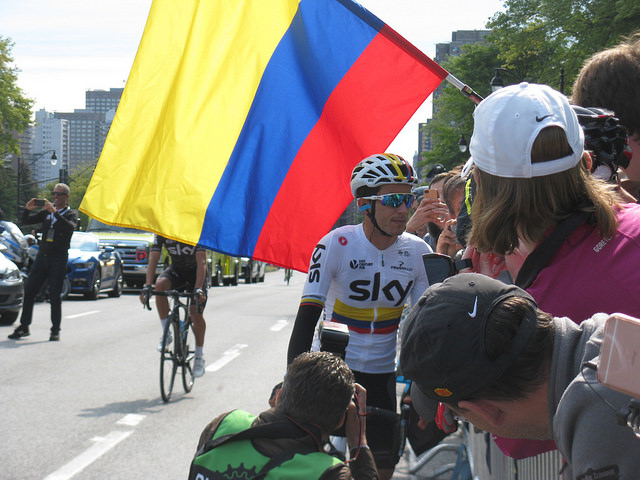 Almost retired (this one is for you, boss) 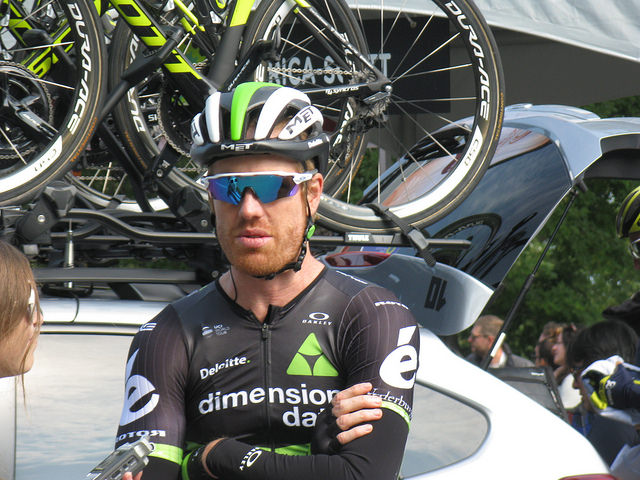 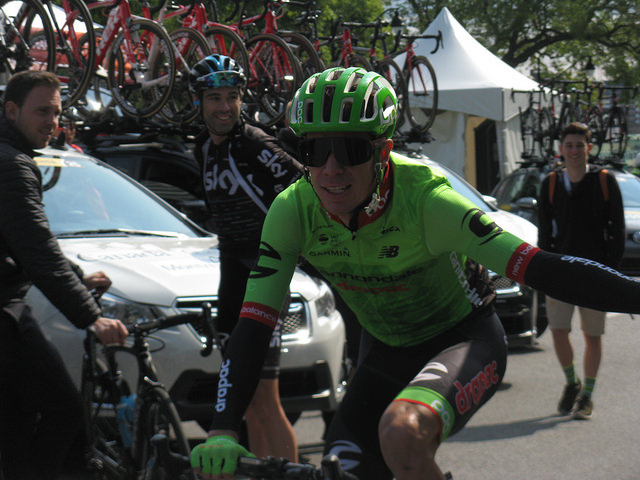 I also managed to shout a "Go Sep!" when Vanmarcke went by (and got a little salute, so the Podium Café honor is safe!) After that, the race started. I made my way down to the hairpin at the end of lap 1. Always impressive to see how fast they arrive, slam on the brakes and re-accelerate. 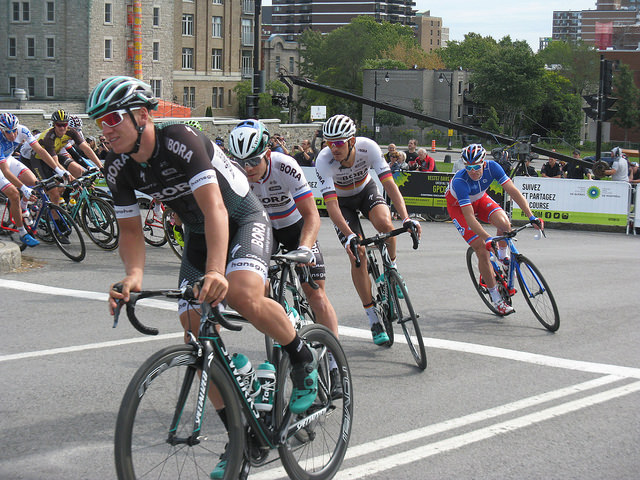 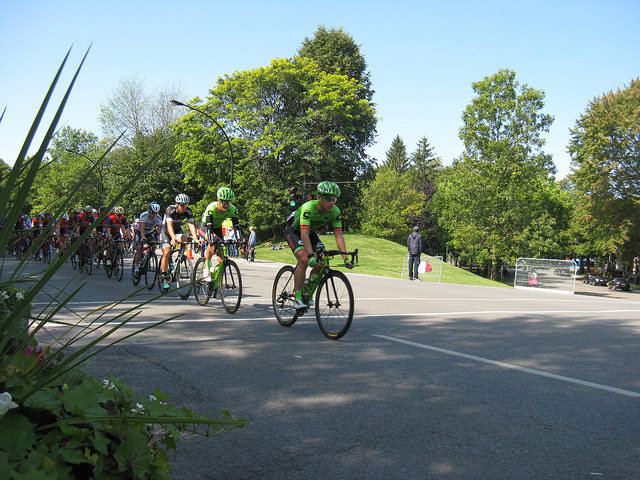 Rounding a corner near Édouard-Montpetit 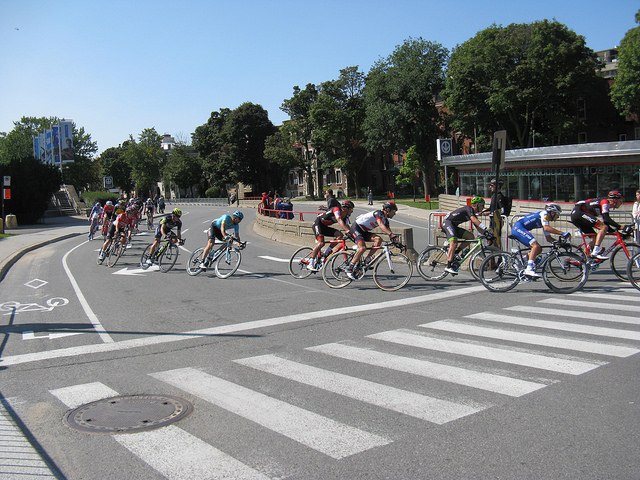 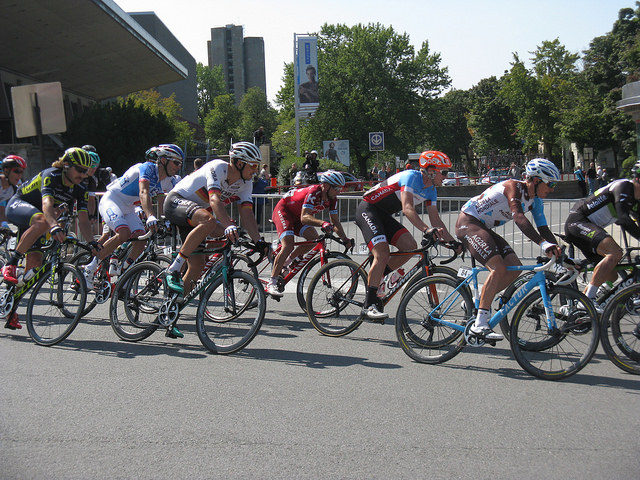 View from above (right after that picture, I managed to drop my spare camera batteries, saw them bounce a few times on a grating and then right down a ventilation shaft that goes to a train tunnel under Mont-Royal. Oops!) 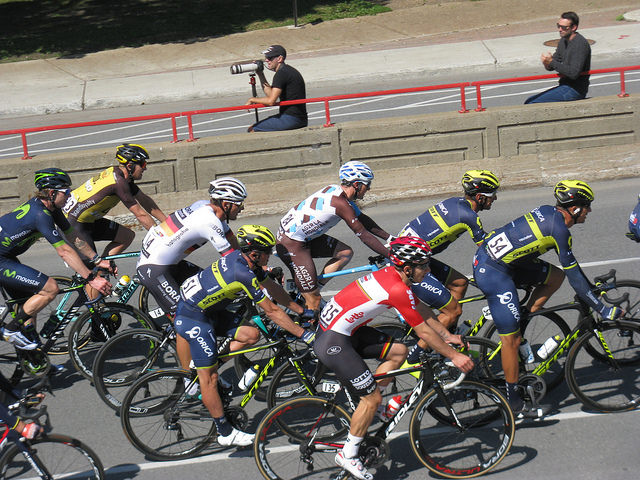 Oh well. But the view was nice, so I took a picture of the same corner, again 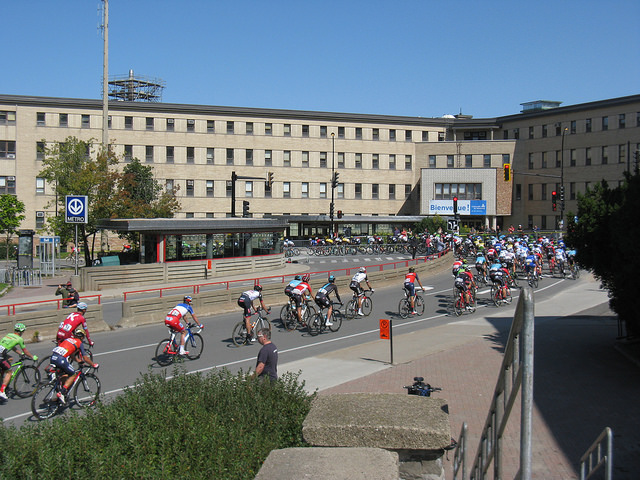 The early break. I spoke with Matteo Dal-Cin before the race, and he made the break. Coincidence? No! 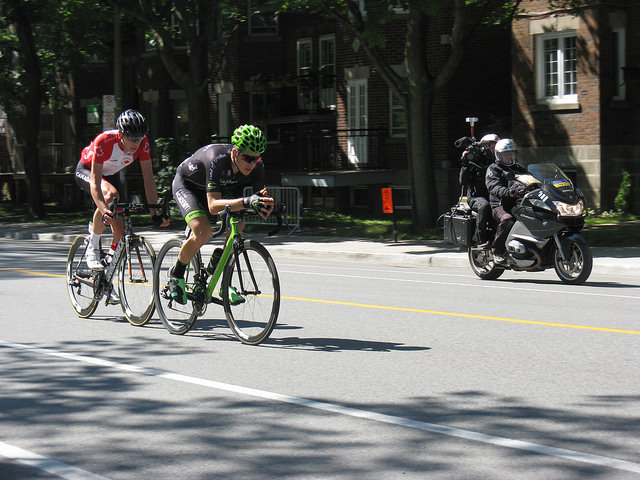 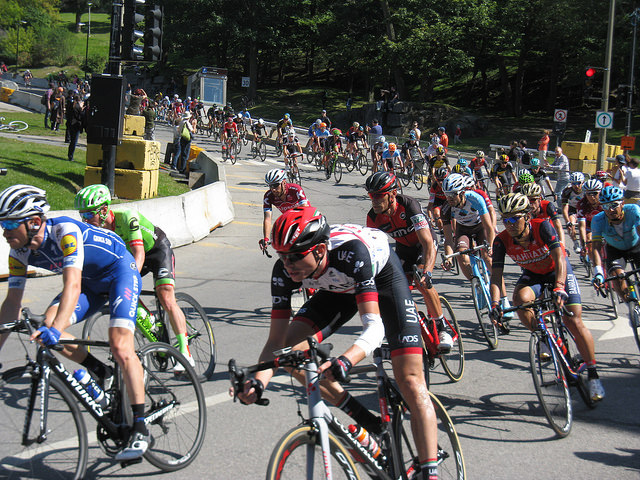 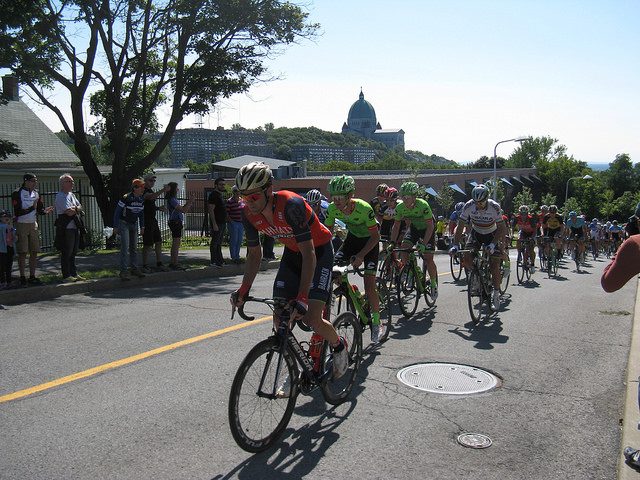 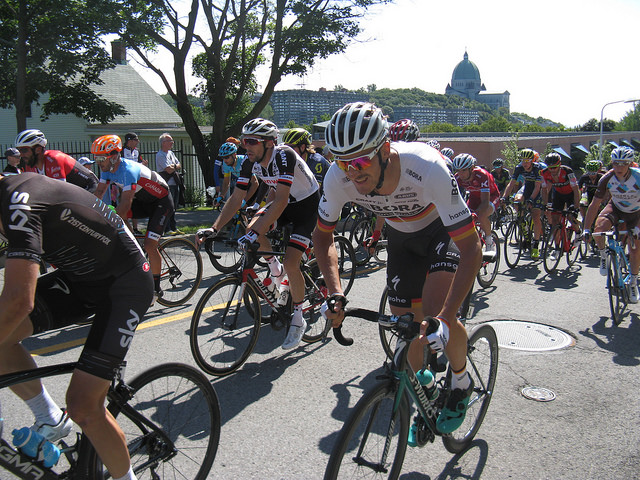 From there we made our way to the Camilien-Houde climb. At one point the peloton went by us downhill, which is quite spectacular. But even more spectacular was to see a few dropped riders riding inches behind team cars on the downhill at 80kph+. Crazy. After that we went uphill, then down to the bottom of Camilien-Houde, a few laps from the end 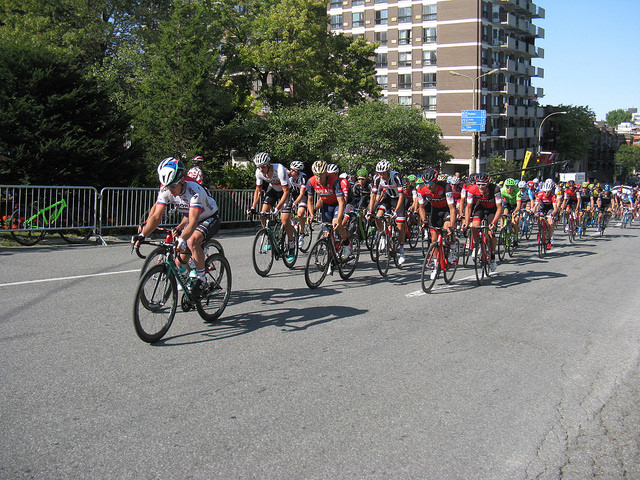 Found a spot at about 200m from the finish line for the end of the race. It was fun to see some feedzone action (between laps, soigneurs gave fans a lot of free stuff like musettes and bottles. Team Sunweb was very generous, some other team which I won't name but did a veeeeerry good result, much less so) 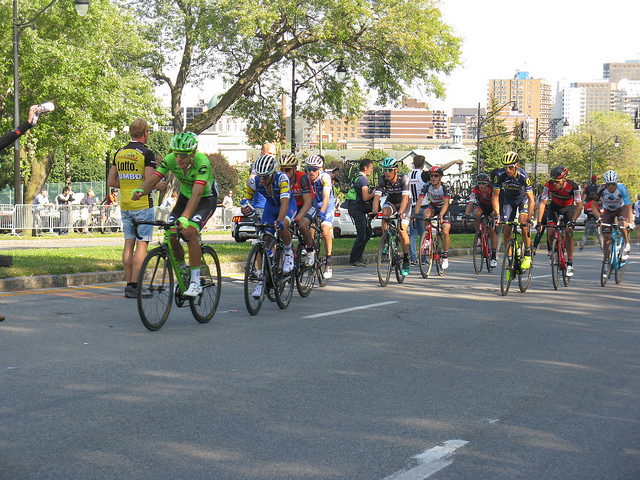 And then it was time for the final sprint (too early, Jan! - but wow Herrada was that far behind? nice comeback) 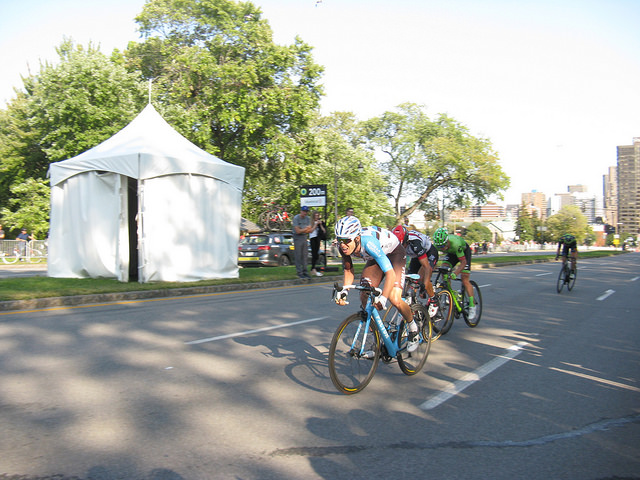 Making my way out of the circuit, I was able to find out that Antoine Duchesne was the best Canadian, so he made a trip to the podium (give that man a job for 2018!) 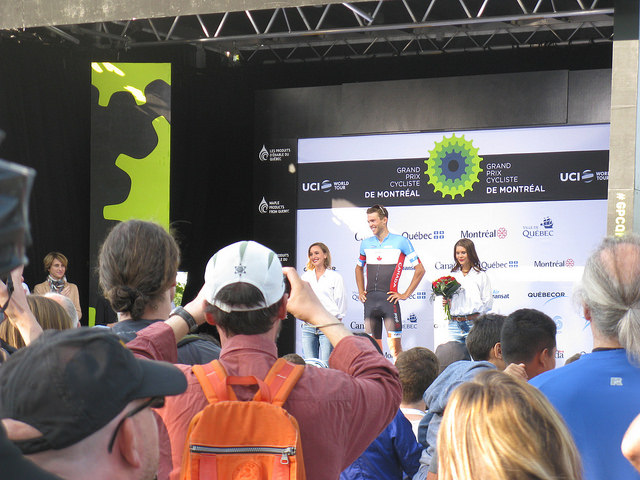 And that was it!