Shawn's already previewed tomorrow's men's race in his own inimitable fashion but here - belatedly - are a few photos from the women's race last weekend. No ghosts alas, just a bloke wheeling a shopping trolley full of liqueurs across the closed roads (his mate with the sackbarrow seems to be transporting large amounts of blue roll and possibly also Nutella...) 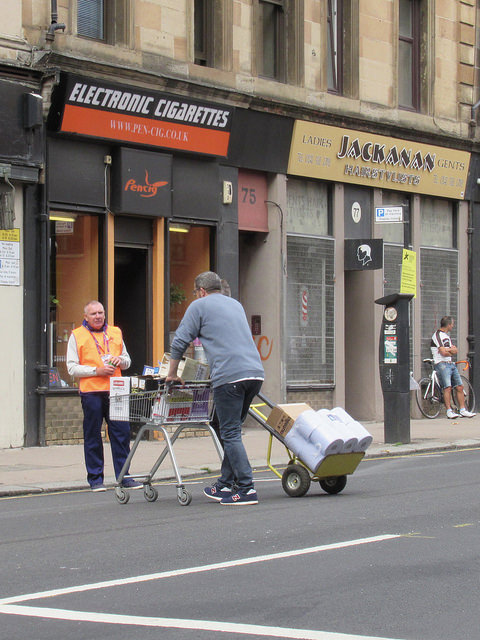 This on a street to the east of the city centre comprising mainly e-cigarette shops and criminal defence lawyers for some reason. It should be said that the course - the same for both men and women, thankfully, just different numbers of laps - also goes up to the leafier West End, around Kelvingrove and Glasgow University and along Byres Road, no less. (You think you don't know Byres Road? Every city has a Byres Road.) As Shawn says, it's a twisty, technical circuit with multiple steep short climbs at both ends of the course, attritional on successive laps but also encouraging breakaways.

It's also great circuit for watching. You could get down to the start at Glasgow Green (no vampires, just loads of mums and dads and kids and cyclists and, the one perhaps countering the effect of the other, a food festival and a sports participation fair) and watch the first few laps… 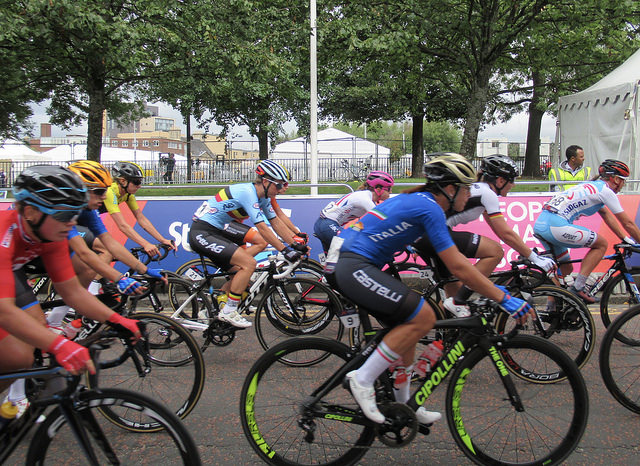 Spot the soon-to-be breakaway heroine… and the eventual winner.

… before heading off out to one of the steeper spots on the course.

In the meantime, a break of five had formed, with multiple world junior MTB champion Sophie Wright going clear… 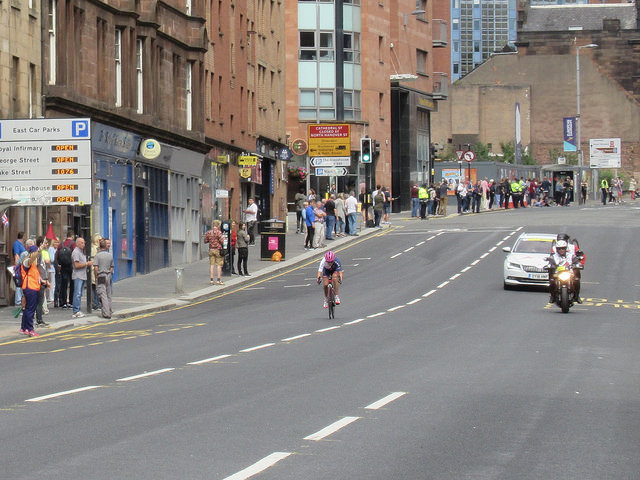 You'll be seeing some more of this pink helmet. 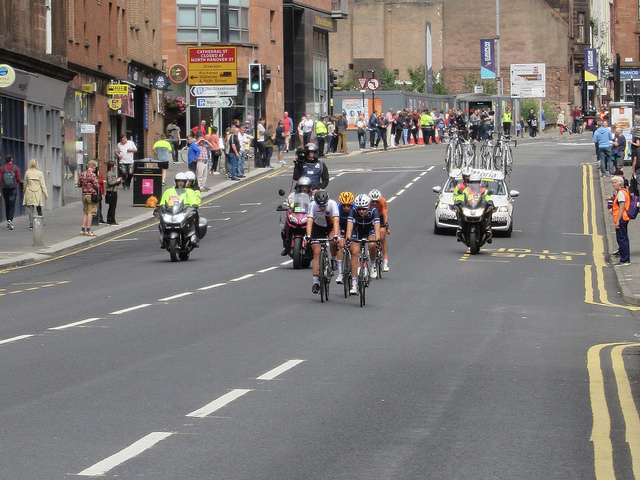 The rest of the early break left in Sophie Wright's wake.

While the riders completed another lap, I hurried off up the short but super-steep Montrose Street for a better view. By the time they came round again, Wright had increased her lead to over two minutes. Klein and Labous… 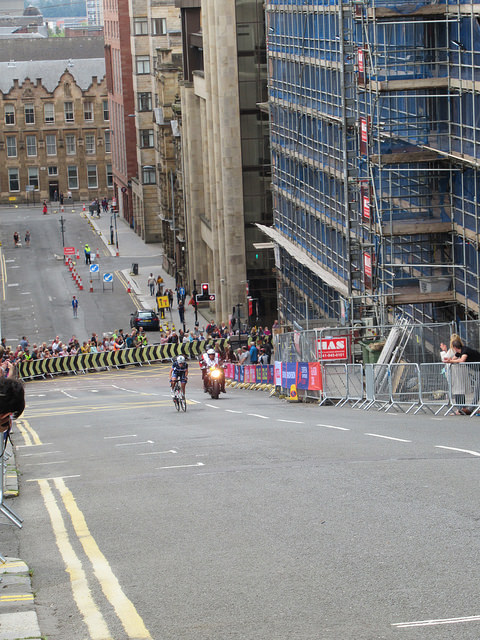 … were also still off the front, though being rapidly reeled in by the peloton led by Anna van der Breggen… 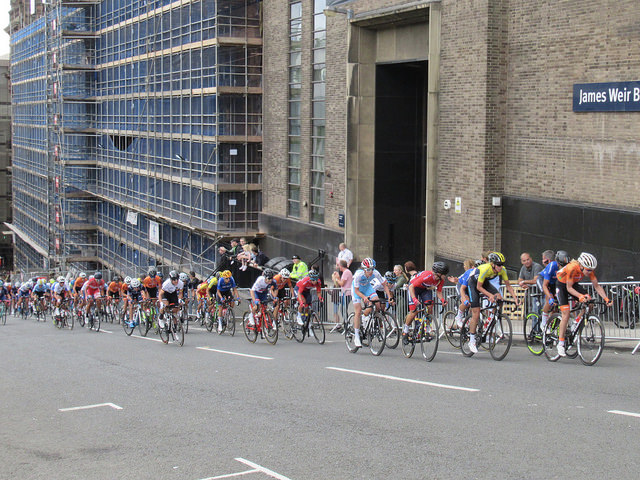 … who at this point in the race looked like an absolute machine. Seeing Anna drag the peloton up the hill was probably the highlight of my day. (That or the crab roll at the food festival, anyway.) But more of Anna later.

At its greatest extent, Sophie Wright's lead stretched to about three minutes… 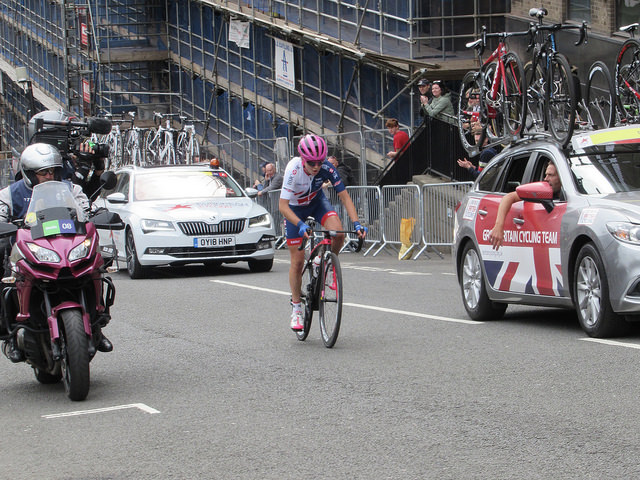 … but as the peloton closed in riders started to attack, including Lucinda Brand and Wright's GB teammate Anna Henderson: 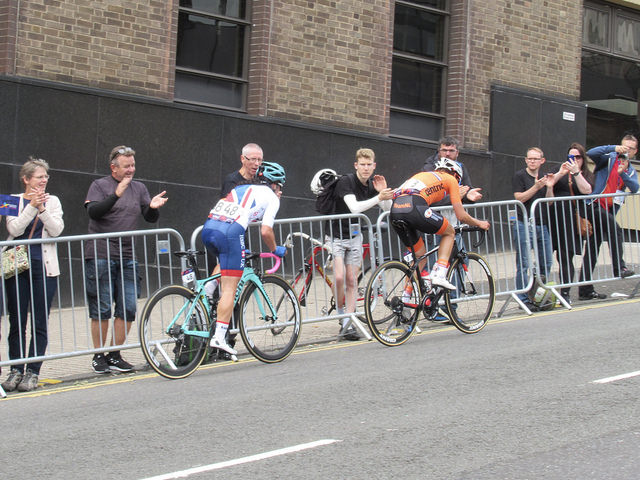 On the next lap, with Wright about to be swallowed up, it was Alice Barnes' turn to attack, followed by Chantal Blaak (nice to see the rainbow jersey on the streets of Glasgow) and Elena Cecchini: 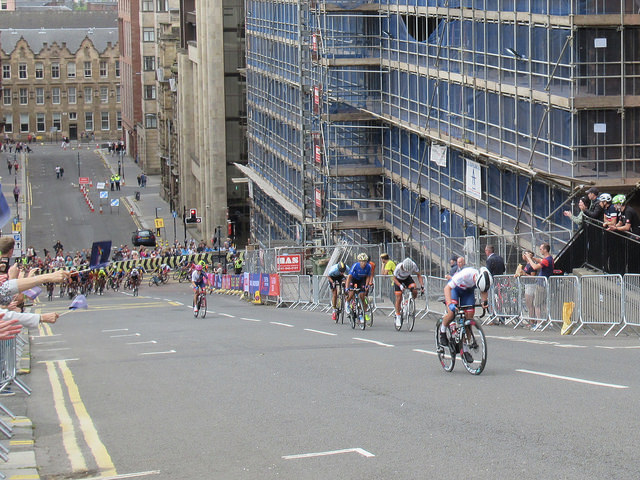 (The second Dutch rider is Stultiens, not sure who the Belgian is. They were both quickly caught though.)

As Wright was finally swept up, you could see the remaining Dutch and Italian riders gathering: 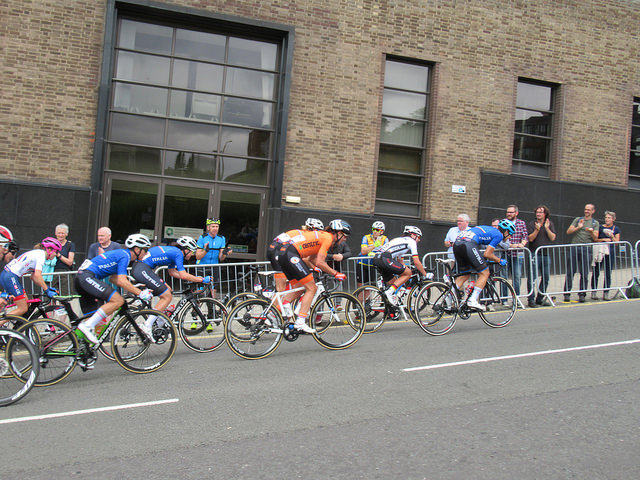 This was my cue to run/jog/speed walk back down to Glasgow Green for the finish, thus missing the next attack, which saw Anna van der Breggen and Elisa Longo Borghini go clear.

I've read all the reports and explanations and rider quotes since, but I'm still at a bit of a loss to understand entirely what happened next. You'd never bet against AvdB in a two-up against ELB, but when they were joined by Dani Rowe - who Wright and co. had been working to set up - Anna apparently signalled some doubts. So the Dutch team continued to chase, even when the trio were joined by Aude Biannic and Anna's teammate Floortje Mackaij.

This is puzzling. Frankly, I'm not so sure Anna wouldn't have beaten Dani, but even if Anna doubted her own chances, surely Floortje would have been a decent bet in a sprint, especially with the help of a teammate? As for the suggestion that Anna's teammates misunderstood and thought she didn't have the legs in general, this also seems odd, given it was Anna who attacked the group. Only ELB could go with her. Rowe, Biannic and Mackaij dropped back.

Watching on the big screen at the finish, once we were back to an Anna vdB-Elisa LB two-up, it seemed the race would only end one way. Yet the sight of the Dutch riders on the front of the peloton caused a nagging doubt. They didn't exactly seem to be blocking... In a very weird moment, the time delay from race to screen meant that we were just seeing the catch on the screen as the reduced peloton of about 20 or so riders hit the finishing straight. Here's my view of the sprint: 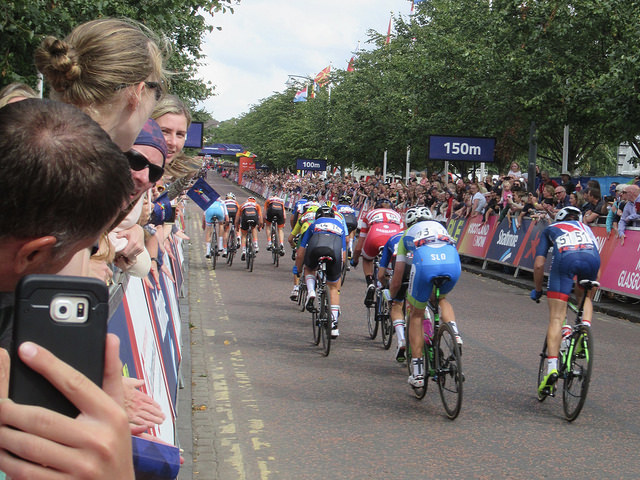 I'm puzzled about where Vos is in this photo.

Not bad, eh? The Dutch train formed right in front of us on the left, but it was Marta Bastianelli who powered past to take the win, well ahead of Vos who seemed to come from the opposite side. Lisa Brennauer, already a Glasgow 2018 medallist on the track, finished third. 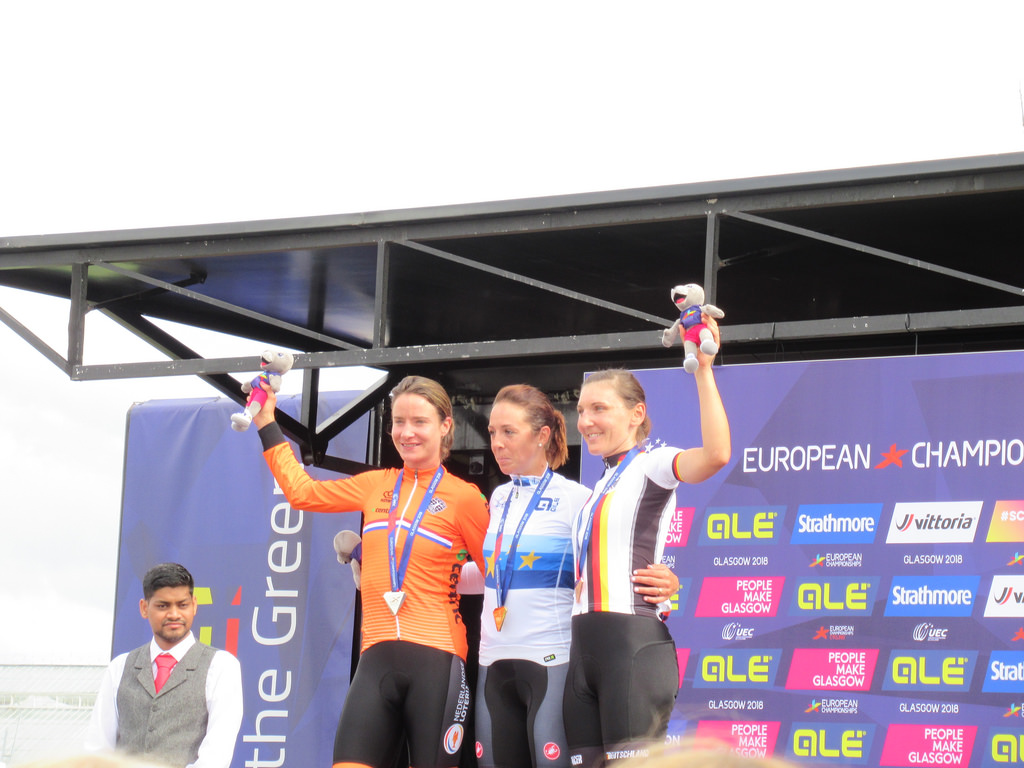 Bastianelli's not necessarily the most popular winner, being one of a small number of riders in the women's peloton to have served a doping suspension (curiously, another, Lithuanian Rasa Leleivyte, finished 6th). But when the Dutch screw up, it's usually the Italians who benefit. And looking back through my photos, it was striking how they are always there, in the breaks and at the front of the peloton, maybe a little bit behind the Dutch, but always watching, waiting, working.

So it was cheers all round on Glasgow Green, followed by ice cream and then off to George Square for a bit of a party. 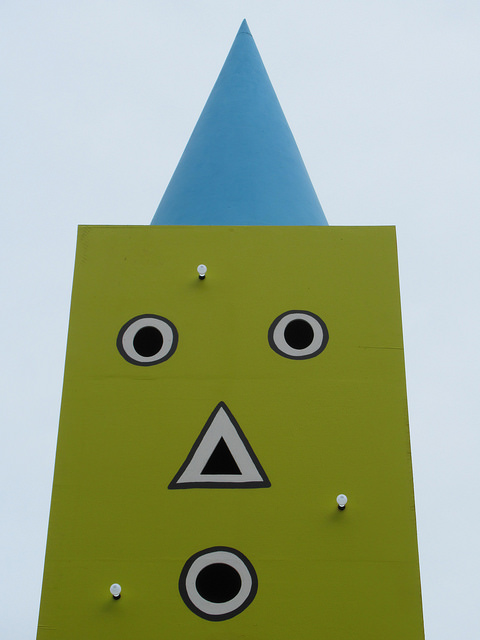