Vélo collects a series of essays by French writer Paul Fournel. It's lovely.

Share All sharing options for: Vélo, by Paul Fournel 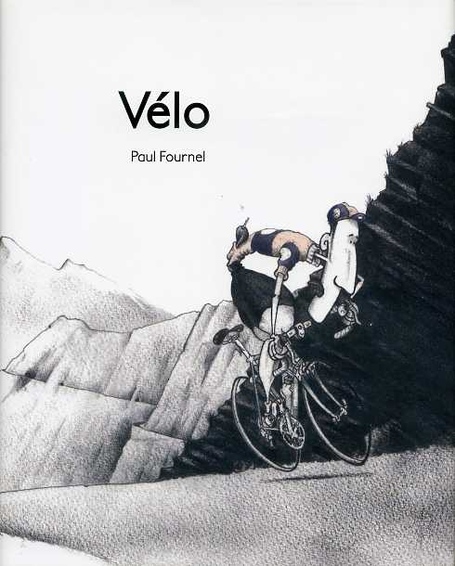 Title: Vélo
Author: Paul Fournel, with illustrations from Jo Burt. Translated from French by Allen Stoeckl.
Publisher: Rouleur Press
Year: 2012
Pages: 157
Order: Rouleur
What it is: A collection of essays on riding bikes by Paul Fournel, a French writer. The collection blends pieces from the previously published Need for the Bike with more recent work by Fournel for Rouleur magazine.
Strengths: Fournel’s writing is lovely and evocative. If you’ve ever ridden a bike for any amount of time these pieces will resonate. The illustrations from Burt complement the meditative quality of the writing.
Weaknesses: Thanks to the melding of two essay collections, there are occasional overlaps and duplications. This is not a big deal, except that it made me perhaps rightly doubt my sanity once or twice. 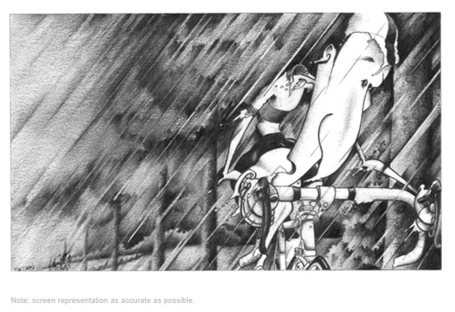 Vélo is a lovely little book about riding the bike. Writer Paul Fournel has spent a lifetime on two wheels. He lingers lovingly on the minutiae of the sport from the shape of a climber’s legs to the way the pavement on each road feels. He climbs mountains and rides through crosswinds. He meets the Man With the Hammer, and he flies to the summit of Mont Ventoux twice in one day. He rides in France, he rides in Death Valley.

And then he writes about it. Each essay stands on its own, but taken together, they tell the story of a life spent on two wheels. I’m not sure it’s quite right to call these pieces essays, which always to me feel like something done on lined paper in a classroom as the clock ticks away the minutes faster than it’s ever possible to get down the words. These pieces feel more like meditations. Or, water-color paintings. They are best read slowly.

Fournel brings some heavyweight literary credentials to the proceedings. He is a graduate of the highly selective École normale supérieure de Fontenay-Saint-Cloud. Situated in Lyon, the school has around 1100 students at any one time. Fournel has also worked as an editor at several of France’s publishing houses, and served as a cultural attaché for France in Egypt.

Additionally, Fournel is a long-time member and current president of a group of experimental writers known as OuLiPo (Ouvroir de littérature potentielle). Founded in the early 1960s, OuLiPo’s inventions include writing a text in which the starting letter of each word follows in alphabetical order. A big cat digs eggs. Really, I’m not qualified. Also, it must surely sound better in French. Italo Calvino was a member of OuLiPo, and his novel, If On A Winter’s Night A Traveller, embodies the group’s experimental ethos.

All of which is to say that Fournel is a pretty big deal. He has spent his life playing intricate games with words and navigating the treacherous spaces between them. His experimentalism shows in the way the pieces in Vélo avoid a strict adherence to structure. The form of each piece reflects the emotion and imagery that Fournel wants to convey. He is a writer who bends the rules to his creative will.

The bike entered Fournel’s life early on, and he began riding first with his father. The bike is a magical contraption in Fournel’s account. "Thanks to the bike, there is a faster man," he writes. Life on the bike begins with a miracle, that red-letter day when the rider can at last balance alone on two wheels. Fournel’s first bike came when he turned nine. It was green to match the machine of Anquetil, and built by his uncle in the factory in Saint-Étienne, Fournel’s hometown.

Though he proves a devoted acolyte to his green machine, Fournel never turned to racing. He finds the answer to why in part in the hate for the bike that he finds among many ex-racers. "It’s among former racers that one meets those who most hate cycling," he writes. Racers blame cycling for their life’s failures and disappointments. "I threw my speed to the four winds and never transformed it into bouquets or cheques," writes Fournel, and he believes he is a happier rider for it.

This is not a book about racing, then, but the Tour de France runs through it. Fournel climbs the mountains made magic by the Tour’s exploits. He shows how the Tour superimposes its own geography over that of France’s territory. The bike allows him to burrow into that landscape. He writes of the mountains he has climbed becoming a part of him. "I’ve sweated them. They were never a performance; we played together."

It seems you can’t talk about riding bikes without talking about doping, and Fournel obliges with a piece devoted to the subject in this collection. It is one of the least creative pieces in the book. Maybe the subject simply does not inspire Fournel the way a ride in the rain does. He assumes the traditionalist’s fatalism. Racers have always used doping, and they always will, he claims. "The lie is too old, the hypocritical abyss they’ve allowed to open between the official line and the real practices too enormous ever to be closed."

It’s not an especially optimistic or original view, but somehow it fits the mood of this collection. As he rides through life, Fournel confronts the world as it is, not as it might have been, or as it could be. His is an immutable world. The bike stays within the road’s boundaries, and the road is determined by the terrain. The mountains must be climbed, they can not be moved. Anti-doping evangelism, or evangelism of any sort, feels out of place here.

This is true of any climb, of course. Here we see Fournel’s skill at its most evident, in his ability to turn the specific into the general. The Ventoux piece ends with this assertion: "The Ventoux has no it-self," he writes. "It’s yourself you’re climbing. If you don’t want to know, stay at the bottom." In Fournel’s hands, the imperative of the bike is an exploration of consciousness. The road sets him on a predetermined course, but his imagination runs freely.

Much like climbing, writing always looks easier when someone else is doing it. Fournel’s writing flows with deceptive simplicity. There’s not a sign anywhere of the effort these short pieces must surely have required to produce. Each word is in its place as if it were meant to be. Like climbing, writing is also easier in the remembering than in the doing. You only remember the good days, the days when the words flow like water through your fingers. Your mind blocks out the suffering.

There is something about riding a bike that seems to compel writers to spill words with abandon. Maybe it’s the repetitiveness of the effort. You sit there, you watch the world go by, your legs turn the pedals. There is not much to think about in the doing of it. Eventually, your body can propel the bike without much help from the brain. And then, the mind is free to spin off in its own directions. You see and think weird things out there.

Riding the bike finally compels the rider to ask why. Why do we make ourselves suffer this way? Why do we find such joy in a cross wind or a steep switchback? For a writer like Fournel, the questions are an invitation and it’s one he energetically accepts.

When we ride the bike, we slip easily into the land of metaphor. Somedays, life is a long slog through the rain, our faces constantly turned to the wind. Other days, we fly up mountains, weightless. What writer could resist the chance to mine this rich terrain? Fournel certainly can’t, and we are better for it.