Share All sharing options for: Cyclocross 2012/2013, by Balint Hamvas 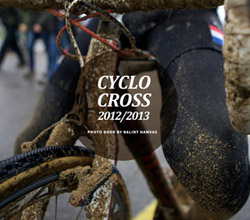 Title: Cyclocross 2012/2013
Author: Balint Hamvas (with text by Caroline Cardinaels and Simon Burney, Dan Seaton, Stefan Wyman and Matthew Montesano)
Publisher: CyclePhotos
Year: 2013
Pages: 229
Order: CyclePhotos.co.uk
What it is: A photographic record of the 2012/2013 cyclocross season.
Strengths: As well as the fantastic photography - most every page has something to cause the eye to linger - the text puts perspective not just on the 2012/2013 'cross season itself, but the whole sport.
Weaknesses: Maybe completists would like a record of who won what where and when.

"The true content of a photograph is invisible, for it derives from a play, not with form, but with time. One might argue that photography is as close to music as to painting."
~ John Berger - Understanding a Photograph

From the green, green grass of Ronse and Tabor to the golden sands of Zonhoven and Koksijde, from the sucking black mud of Asper-Gavere to the snow of Hoogerheide and the floodlit night riding of Diegem, cycling photographer Balint Hamvas has captured pretty much the full 'cross experience in this his third photo annual of the European 'cross season. 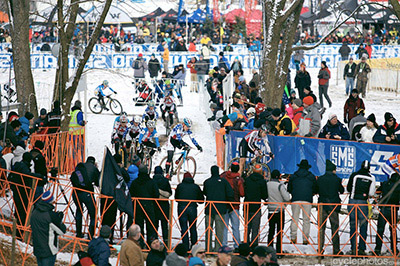 Cyclocross 2012/2013 isn't a definitive account of the 2012/2013 'cross season, a record of who won what, where when and how, it's actually devoid of such mundane detail. Rather it's a series of photographic impressions of the season and the sport itself. As with Cyclocross 2011/2012, action shots intermingle with reaction shots, shots of the courses mix with shots from behind the scenes. Hamvas's lens capture the races from a variety of perspectives that showcase the racing and the races themselves, put you there amid the action and the inaction. 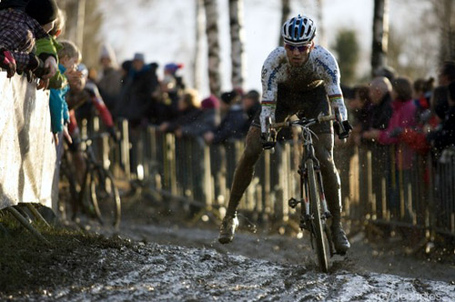 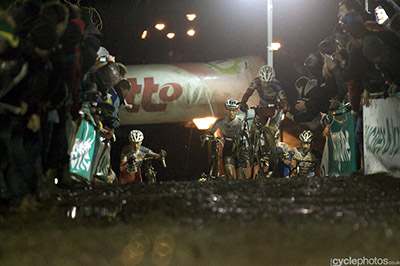 Looked at as races, the book showcases riders like Niels Albert, Marianne Vos, Kevin Pauwels, Katie Compton, Sven Nys and the like with plenty of shots of the riders in action and at rest (Hamvas has a particularly good selection of shots of the finish line crash in Essen involving Zdeněk Štybar and Jan Denuwelaere). 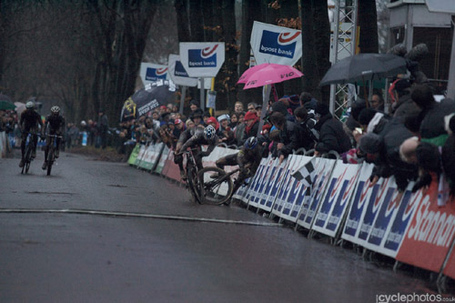 Though I would consider myself to be a fan of photography, I am not often a fan of cycling photography, particularly where road racing is concerned. A certain clichéd sameness has crept into the art. You get the same artistically out-of-focus shots, the blur of speed, spectators held back by barriers, riders made small against magnificent landscapes, thousand-yard-stares in the tired faces of riders after the race. Some of this, I think, is down to the nature of road racing and the inherent difficulties of capturing it through a lens. Cyclocross, though, offers some advantages that its road cousin lacks. Races being on a circuit there are more opportunities to find better places to shoot from, there are greater opportunities to find different ways of telling the same story without resorting to cliché. This, I think, is something Hamvas does well, both across the season in Cyclocross 2012/2013 and across several seasons when comparing this book with its predecessor. Each page offers something for the eye to linger on. 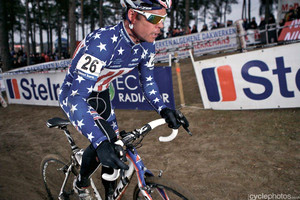 As well as the photography, various contributors chip in with brief chapters about the glory days Swiss 'cross (Simon Burney), the 'cross take on globalisation (Caroline Cardinaels), why amateurs ride 'cross (Dan Seaton), how 'cross is leading the way when it comes to equality between the sexes (Stefan Wyman), and the burgeoning US 'cross scene (Matthew Montesano). These chapters - particularly the three from Burney, Cardinaels and Wyman - show that many of the same issues that are key to understanding the past and the future of road racing are equally present in 'cross, and that in some areas the winter discipline is blazing a clearer trail and than it's more celebrated tarmac-loving cousin. 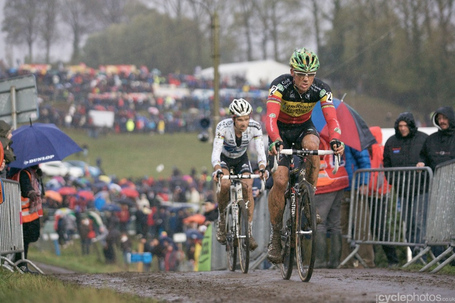 Hamvas himself also offers up a couple of photographic essays not directly about individual races, chapters that look at supporters (who love to dress up), a day in the life of J-Pow, Jeremy Powers, and a particularly fascinating series in which he revisits some of the race venues weeks or months after the races have gone. Like those shots of the mud of the Great War transformed into the farmed fields of today, looking at 'cross courses without the riders it's sometimes hard to imagine what has gone on there only a few weeks before. 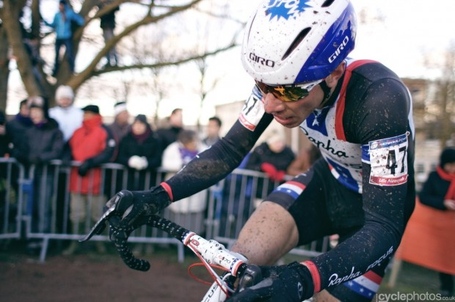 Whether you're a fan of 'cross or a fan of photography, Hamvas's Cyclocross 2012/2013 is a worthy addition to any cycling bookshelf, a coffee-table photo album that pleasantly rewards the time spent flicking through it. It's an atmospheric album filled with striking slices of time that move from adrenalin filled action through more peaceful moments. It's that rare thing, a cycling photo album that genuinely rewards repeated viewings. 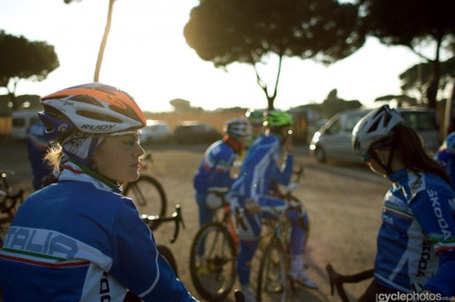