The William Hill prize-winning true story of a 1960s gang of horse nobblers.

Share All sharing options for: Doped, by Jamie Reid 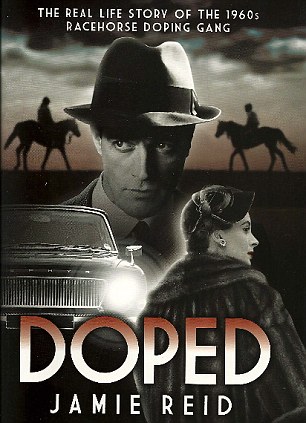 Title: Doped - The True Story of the 1960s Racehorse Doping Gang
Author: Jamie Reid
Publisher: Racing Post
Pages: 312
Year: 2013
Order: Racing Post
What it is: The story of Bill Roper - Roper the Doper - and his gang of hose nobblers.
Strengths: It's a well told timeless story, with only the fashions having changed.
Weaknesses: There are times when Reid's research hangs too heavy on the frame of an otherwise vivid and evocative story.

The bar of the Tattersalls Enclosure at Whitehawk Down, Brighton's racecourse. A July Wednesday in 1962. The afternoon of the eighth. Edward 'Teddy' Smith stands with his back to the bar, giving it large to all who would listen. And who wouldn't want to listen to what Ted Smith had to say. "You don't want to back all those blooming favourites," he called out to one of the prettier young punters trying to get her shilling on each way in the Downs Maiden Stakes. "Favourites can get beat," Ted told the throng of punters, "and believe me, I know. And when they do it's us smart money boys who set it up and make a killing." Now he had their attention, had them hanging on for the big reveal. But if they expected to discover the identity of the best bet of the day, they were mistaken. Instead they learned the identity of the man with the inside knowledge: "You've heard about horses being doped, haven't you sweetheart? Well, I'm carrying enough dope to stop all the horses running on this racecourse today. I ... am the Witch Doctor."

When Smith was arrested - the barman had phoned the police and they sent a couple of officers around to check out what was happening - he was found to be carrying luminal sodium and methyl amphetamine hydrochloride. Smith said - like they all do - that the one was for his migraine and the other he'd just found. Two days later, when his Surbiton flat was searched, the police found enough dope to knock out more than six hundred horses.

Four months later Smith took a swan dive from a top floor landing on Lewes prison and six weeks later he died from injuries sustained in the fall, without having regained consciousness. Some said he'd jumped. Others were sure he was pushed, in order to stop him sharing with the authorities the things he knew about doping horses. 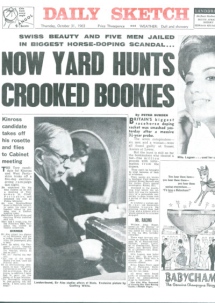 Ten years before Ted Smith's death in 1962 the first seeds of the conspiracy he would be arrested for were sown. The cast of characters is long and colourful but eventually, having started off small scale toward the end of the 'fifties, Smith was introduced to Bill Roper, a bookie, and Roper became the focal point of a doping ring that, for several years, was able to run amok in the UK horseracing scene.

The mechanics of how Roper and his accomplisses got at horses is one of the interesting aspects of the story. Sometimes it was done with the assistance of stablehands willing to sell their bosses out for a few quid in the back pocket, more often it involved breaking into training yarda at night. To do this, though, the yards needed to be reconnoitred during the day. And in this task Roper's Swiss mistress, Micheline Lugeon, was key.

Posing as a French owner looking for a UK stables for some of her horses, she and Roper - disguised as her chauffeur - would visit yards, usually when the owner was away, and con whoever was in charge into showing them around. Having identified what horses were boxed where, they left and weren't seen again. Then, ahead of the race Roper wanted to fix the result of, other members of his gang would break into the yard and dope whichever horse was required to put in a poor performance. 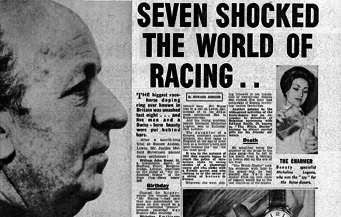 A wideboy like Roper and his exotic mistress doping Derby favourites and the Queen Mother's horses would, on any other day, make for a hell of a scandal in the UK, one that would be hard to forget. But Roper and co went to court around the same time as the Profumo affair and, while the trial made the front page, the sex and spying scandal has pushed the story of a bent bookie into the wings of history.

While the story might have been shunted aside by Profumo then, Jamie Reid's telling of it now certainly makes for an attention-grabbing read. Reid's research is exhaustive - ranging from all things turf to the Rachmanism of Notting Hill - and enables him to evoke a sense of Britain in the 1950s and 1960s (though sometimes the research is worn a tad too heavily and makes ungainly intrusions into the story). Overall, though, Doped makes for a pacey read as the authorities finally build up some interest in Roper and his gang and slowly close in on them.

As a rule, the Café Bookshelf doesn't look much at other sports outside of cycling. But there was something about the blurb for Doped that attracted my attention. For one, as the name suggests, it's a book about doping and the Café Bookshelf is crazy for doping. While doping in cycling is primarily performance enhancing, the doping in Doped is about the opposite, it's about nobbling horses. (There are stories about cyclists being slipped Mickey Finns, from Paul Duboc in the Tour de France to Freddy Maertens in the World Championships, but by and large these are treated as light relief amid all the darker doping stories that fill the sport.) The bigger attraction for me, though, was why the horses were being nobbled: gambling.

Gambling is key to the growth of many sports, in particular horseracing. Without the option to put a few quid on one of the nags, very few people would be bothered trying to decide which horse was better than which. Gambling helped take horseracing from privately arranged matches and into purpose built racecourses, and from there onto televisions around the world. But, for all the good that gambling has done the sport - all sport, not just the gee-gees - there are some who believe it will, one day, be the ruin of sport. That gamblers will exert so much control over who wins what where and when that sport will become meaningless. Today match fixing - either fixing the final result or just engineering particular events to happen at particular times - is the new bogeyman, something so bad that even doping pales into insignificance in its shadow.

The other strand of the story that was interesting to me was how the doping ring was able to operate with impunity for several years before finally being busted. Trainers and bookies hadn't wanted to share their knowledge with the authorities and - by and large - the authorities hadn't wanted to deal with the problem until it became too obvious too ignore (ie until the gang went after some very high profile horses). There was a familiar atmosphere of denial and buck-passing in the way the crime was investigated.

All of these strands - the doping, the fixing, the inaction of the authorities - is what makes Doped a book whose readership should extend beyond the horse-racing fraternity.