It's All About The Bike, by Sean Yates

The autobiography of a legend.

Share All sharing options for: It's All About The Bike, by Sean Yates 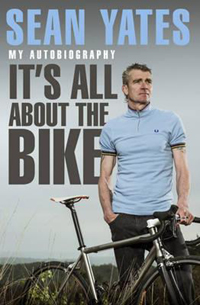 Title: It's All About The Bike: My Autobiography
Author: Sean Yates (with John Deering)
Publisher: Bantam
Year: 2013
Pages: 313
Order: Transworld
What it is: The autobiography of Sean Yates
Strengths: Well written and actually reminds you of why you liked Yates in the first place
Weaknesses: A refusal to confront the topic of doping

Sean Yates is a legend. For any of the British and Irish cycling fans who came to the sport in the late 1980s and early 1990s, Yates is as big a hero as the more decorated géants de la route like Bernard Hinault, Laurent Fignon, Sean Kelly or Stephen Roche. Yates was the grafter who sometimes got a big day in the sun but was most admired for the work he did for others. Never too showy, never too aloof, it was easier to see something of yourself - even if only in your dreams - in someone like Yates than in his more celebrated peers. Yates was a true people's champion: charming, decent and down to earth. Everybody loved Sean Yates.

In more recent years, that Sean Yates disappeared and he's become a more divisive figure. Some dislike him for the time he spent working for Bjarne Riis and Johan Bruyneel, some for his time working for Dave Brailsford. In light of what is known to have happened at Bruyneel's teams and what is believed to have happened at Riis's, many find it hard to accept Yates' silence on the subject of doping, his attempts to brush it all under the carpet and pretend it didn't exist.

Anyone coming to It's All About The Bike expecting some honesty from Yates on the subject of doping will be disappointed:

"If you want to read about who stuck what needle in whose arm at what race in the back of whose car in 1983 or whenever, them I'm afraid you're reading the wrong book. This is a book about cycling, not drugs. There are acres of information about that sort of thing on the internet and in other books, you don't need it from me, and I'm not interested in talking about it. I want to talk about cycling. [...] I think that in 2013 we ought to be able to talk about cycling with enough knowledge of the background, enough recognition that the sport's awkward relationship with the public is now in a new, more open and healthy phase. It would be nice if we could start talking about the actual business of bike riding again."

In that defence of his silence Yates misrepresents what people want: it's not about who did what where and when, it's a greater understanding of how big the problem was (or is, if you want to believe it hasn't gone away). And the sport cannot be said to be in a more open and healthy phase when we still have to deal with an unhealthy silence about the past. How can you believe that people are being open and honest about the present when those same people are lying to your face about the past?

There were two doping incidents I was hoping Yates would have the guts to talk about. The first is the time he returned an adverse analytical finding at the Tour of Belgium but got off (in the words of Hein Verbruggen, he was given the benefit of the doubt). While Yates spends two pages talking about that race, not once does he mention doping. The other incident is a story about the post-Tour critérium races he and Allan Peiper rode. In his autobiography, A Peiper's Tale, the Australian acknowledges that doping was part of the critérium circuit and that he did partake. As with Belgium, while Yates does talk about those races, he doesn't mention doping. (Oddly, the book's index does reference that tale under doping.)

If, though, you can park the doping, It's All About The Bike is actually a very good read, better by far than many of the other recent autobiographies that could be filed under British Cycling And My Role In Its Rise To Glory. Yates takes you through his childhood near Ashdown Forest through his apprenticeship years with ACBB and on through his various teams, as both rider and directeur sportif. In talking about his time at Peugeot, Fagor and 7-Eleven Yates reminds you why he was so well liked within the cycling community.

One of the tricks that makes the book work is that, rather than simply telling the tale himself, Yates involves people from his past in telling the tale, from his mother and some childhood friends through to people he rode with and against in the pro peloton (the likes of Sean Kelly, Dag Otto Lauritzen and Johan Bruyneel all put in appearances). The whole thing has a charming, casual air about it, sometimes feeling like a couple of old mates sitting down over a pint and reminiscing about the past.

There is, of course, the elephant in the room that is doping, and that kicks the book out of gear come the Motorola years and the arrival on the scene of Lance Armstrong. The book does actually lose its pace here, as if Yates was struggling to say something without having to say something else.

Among the guest appearances in It's All About The Bike is Yates's ex-wife, Pippa, who gets to contribute a whole chapter to the book and reveals things Yates himself has totally ignored, such as his relationship with his father. The picture you get of Yates from that chapter is not the most flattering, but it does fit. She also says some nice thing about Armstrong:

"He was a decent, respectful, driven and ambitious man. Brash and loud, but, God, he's American. I can't help but be thoroughly confused by a sport that reveres his rival and similarly disrobed champion Marco Pantani yet goes to such lengths to vilify Lance at every available opportunity. I just don't get it."

There's a lot of us feel that same way.

Of most interest to a lot of readers - those new to the sport - will be what Yates has to say of his time with Team Sky. From the book's opening Yates makes clear that he is unhappy with the way Sky handled his departure, first of all the fact that it became necessary but also because the team left the door open for some to link it to doping in his past. When he comes to actually talking about the team he becomes even more critical. The early months of the project, he notes, were particularly fraught:

"There were all sorts of little power struggles going on as various people at all levels tried to assert their own position in the food chain."

It's fair to say that what Yates has to say - coupled with all the revelations coming out in the rest of the British Cycling And My Role In Its Rise To Glory autobiographies - will give Dave Brailsford and his ghost more than a few talking points as they put together What It Takes. One of the most interesting parts will be the events at La Toussuire in the 2012 Tour de France, where Chris Froome appeared to attack Bradley Wiggins resulting in a situation where the side-burned people's hero threw a hissy-fit and wanted to leave the Tour that night. Yates's description of the off-road handling of that situation showcase Brailsford's tendency to try and hide away from trouble rather than confronting the problem head on.

If you can get over Yates's hypocrisy on doping - not only does he say that the sport is open and honest today when he is being far from open and honest, he also manages to criticise Riccardo Riccò and Emanuele Sella's doping at the Giro d'Italia while singing the praises of doped performances from the likes of Armstrong and Tyler Hamilton - then Yates's autobiography is a pleasantly rewarding read, one of those rare well written cycling autobiographies that engages the reader. And, even if you can't get over hypocrisy concerning doping, I'd still recommend reading what It's All About The Bike if for no other reason than that its nice to be reminded why Yates used to be such a legend.