The Wall Street Journal duo Reed Albergotti and Vanessa O'Connell move the Lance Armstrong story from the sports pages to the business and look at the roles played by many involved with Armstrong Inc in the USPS doping scandal.

Share All sharing options for: Wheelmen, by Reed Albergotti and Vanessa O'Connell 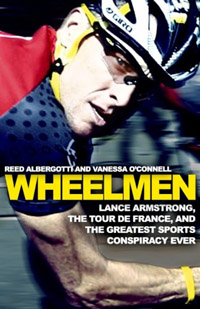 Title: Wheelmen: Lance Armstrong, the Tour de France, and the Greatest Sports Conspiracy Ever
Authors: Reed Albergotti and Vanessa O'Connell
Publisher: Gotham / Headline
Year: 2013
Pages: 364
Order: Penguin US / Headline
What it is: A streamlined telling of the rise and fall of Armstrong Inc.
Strengths: The streamlining of the narrative helps highlight elements of the story still being overlooked in the rush to condemn one man for the crimes of many.
Weaknesses: We're nowhere near the end of this story and much is yet to be revealed.

Time was when the bookshop shelves creaked under the weight of books telling us how brilliant Lance Armstrong was. Now it's time for the opposite story to be told. Wheelmen is the third post-USADA Lance Armstrong And My Part In His Downfall volume - following Tyler Hamilton's The Secret Race and David Walsh's clippings job, Lanced, and rushed Seven Deadly Sins - and presents the rise and fall of Armstrong as a story more suited to the business pages than the sports:

"We view this as a business story - a story about a business that, at least in its participants' eyes, was too big too fail. [...] Viewing Armstrong's rise and fall through the prism of business, we see him as both tool and beneficiary of the ambitions of a small group of Americans who wanted the United States to become a major player in what had been a mainly European sport." 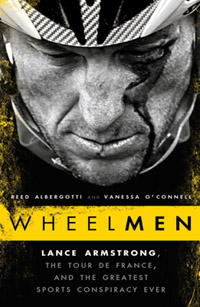 That it is a book about the business side of the story, and not the cycling, is probably for the best, as the authors - the Wall Street Journal's Reed Albergotti and Vanessa O'Connell - do make a few factual faux pas when they do deal with cycling. Like many, they believe things such as that Andy Hampsten won the Gavia stage of the 1988 Giro or that the Simpson monument actually marks the place the Briton fell and died or that European cycling was a backwater before Americans came along and thought them tricks like driving the pace on the flat ahead of a climb. Each is eminently believable, each tells a greater truth, but each is factually inaccurate, as are many other claims made in the book about the sport itself.

In this regard Albergotti and O'Connell share something with many who chronicled the rise of Armstrong, the many who bigged up the American legend by telling us things such as that he was the youngest ever World Champion. The rise and fall of Armstrong Inc, while the story has turned one hundred eighty degrees, is still essentially the same story: Armstrong was the biggest, the baddest and the best, whatever way you view him. And however facts have to be twisted to make that so.

This belief that Armstrong was the baddest of bad is carried in Wheelmen's subtitle, Lance Armstrong, the Tour de France, and the Greatest Sports Conspiracy Ever. In recent months even Travis Tygart has seemed to be backing off USADA's hyperbole and the claim that the USPS doping programme was "more extensive than any previously revealed in professional sports history." The idea that Armstrong was no more guilty than many of his peers or predecessors, though, is not something that many can countenance. Certainly Albergotti and O'Connell don't spend much time considering what others were doing, comparing USPS with Banesto or Telekom, for instance, this isn't that story. Nor is there much consideration for the other conspiracies Armstrong's doping is supposed to have been greater than, such as the state-sponsored Soviet-era systems (technically not professional sport, I know, but no one believed in the Soviet-era shamateurism then, so why should we cling to it now?). You simply have to accept as unchallenged fact that Armstrong's is the greatest sporting conspiracy story ever told.

An obvious comparison for Wheelmen is Mark Fainaru-Wada and Lance Williams's Game of Shadows, which chronicled the BALCO scandal. Like Fainaru-Wada and Williams reporting the unfolding BALCO scandal at the San Francisco Chronicle, Albergotti and O'Connell have covered large parts of the Armstrong fall for the Wall Street Journal and were first to publish some important parts of the tale. Arising from the BALCO reporting, though, was the story of how Fainaru-Wada and Williams were played by the protagonists, who leaked them information not just for the purpose of spin but also with the ultimate goal of derailing any possible trial. It would be unusual to expect reporters to take a step back from their story and consider the wider implications of the role they played, but in the case of Armstrong and USADA - where both sides have been spinning to selected outlets - perhaps some such perspective would be appropriate.

In treating Armstrong's rise and fall as a business story Albergotti and O'Connell show that the Texan was not the only one to profit from what happened during those years. Men like Thom Weisel, Jim Ochowicz and Steve Johnson, along with businesses like Nike and Oakley, are shown to have been, at best, negligent or, at worst, complicit in what went on at Armstrong's teams. Either they knew, or they ought to have known, what was going on. Quite how guilty these individuals and organisations are, though, is one of the problems of publishing a book about the fall of Armstrong while that fall is still on-going. No matter how thorough Albergotti and O'Connell are in their telling of the tale, Wheelmen is not the full story, for the full story has yet to be revealed.

For what it is - what is known so far - Wheelmen does provide a valuable and informative (as well as highly readable) summary of the story, streamlining the narrative and reducing the cast of characters to a bare minimum. Obviously, that means that some elements of the story are downplayed and some overplayed (is there, for instance, any real evidence for the $500,000 Julien de Vries - a mechanic, remember - claims was paid to Hein Verbruggen by Nike, a tale repeated several times in Wheelmen). But such streamlining does help to emphasise elements that are, in general, being overlooked: while Armstrong has taken the fall, he couldn't have done what he did alone. Albergotti and O'Connell make a lot of effort to try and make people realise this.

For anyone with an interest in the Armstrong story - how it happened, how it was allowed to happen - Wheelmen is an invaluable contribution, regardless of how much you think you already know. In time the full story will - hopefully - emerge but, for now, Albergotti and O'Connell provide some key pointers on where future revelations ought to be coming from and what direction the rest of the tale should travel in.