Share All sharing options for: Mastermind, by Richard Moore 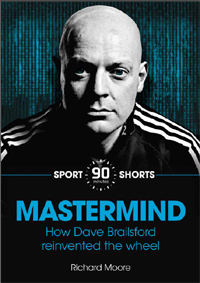 Title: Mastermind - How Dave Brailsford Reinvented The Wheel
Author: Richard Moore
Publisher: 90 Minutes
Year: 2013
Pages: 45
Order: Amazon
What it is: A look at the crisis management skills of Team Sky supremo Dave Brailsford
Strengths: Crisis is fantastic for revealing the true character of most people
Weaknesses: Could perhaps have done with asking how the crises examined arose, and not just examine how Brailsford handled them

Falling somewhere between a very short book and a very long magazine article, Richard Moore's Mastermind is an e-book from Scottish publishers BackPage Press, whose 90 Minutes Sport Shorts series is neatly filling a gap in the market for long-form articles. The 90 Minutes refers to - roughly - the time it'll take you to read one of these forty-odd page (circa 15,000 words) e-books. Titles in the series so far have looked at boxing and the difficulty of making fight weight, tennis and the marginal gains that have made Andy Murray a champion and football and the South American super clasicso. Richard Moore's Mastermind adds cycling to the menu, Moore looking at the manner in which the British Cycling and Team Sky supremo has handled three different crises. 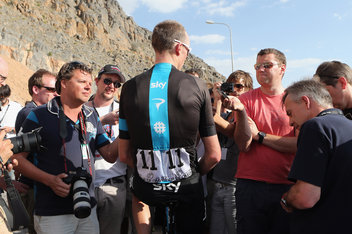 Opening in Oman on Valentine's day 2013, where Bradley Wiggins and Chris Froome raced together for the first time since the Olympics, the crisis of which of the two would get to play leader come July was a problem for future Dave, as he and his sidekick Tim Kerrison cheered Froome up Green Mountain. This was a day to put away the problems of the past and the future and enjoy the pleasures of the moment. It was a day to chill after a Winter of discontent which had almost seen Brailsford walking away from it all.

How many times Brailsford has considered walking away from it all I have no idea. But in Moore's first attempt to chronicle the impact Brailsford (and others) have had on British Cycling - Heroes, Villains and Velodromes - we learned that Rob Hayles being busted by the haematocrit police in the Manchester base of British Cycling had almost seen Brailsford do the modern equivalent of retiring to the drawing room with a stiff whisky and his revolver. As with Brailsford's "lessons have been learned" mantra quitting is, it seems, a response that is no longer entirely unexpected.

Almost pushing Brailsford over the edge this time was the USADA report into doping at US Postal during Lance Armstrong's long reign of terror. As the toxic mushroom cloud spread outward many were engulfed by the fallout. Including Team Sky, a home from home for some former US Postal veterans. Fortunately someone was on hand to talk Brailsford down off the ledge and instead of throwing himself on the sacrificial altar Steve de Jongh, Bobby Julich, Sean Yates and Michael Rogers all got the big heavo-ho in an attempt to satiate the media's desire for blood. The bodies thrown on the pyre, Team Sky retrenched behind the Thin Blue Line and rebuilt the ramparts of their Zero Tolerance Policy.

Moore explains in more detail than I will here the manner in which Brailsford dealt with that crisis but I think the telling message coming from the story is that while Brailsford sought counsel, it was from outside the organisation. In fact, it was from outside the sport itself. It was not the executives of British Cycling that Brailsford turned to, nor any of his colleagues in the Team GB and Team Sky camps. Instead, it was to former journalist and political spin doctor - and sometime Armstrong fanboy - Alistair Campbell, who had learned a thing or two about crisis management, that Brailsford turned. It was also to a management self-help manual, Marianne Jennings' The Seven Signs of Ethical Collpase. (For those signs and how they apply to Sky, you'll have to read Mastermind.)

As well as what that story tells us about where Brailsford takes his counsel, what is also telling is that Brailsford did not flinch from the fallout of a ruthless decision that was guaranteed to see several of the team's personnel being tossed on the bonfire. Sean Yates and Michael Barry both retired, Michael Rogers changed team and Steve de Jongh and Bobby Julich 'fessed up to having been in the past a little too tolerant of things that would embarrass their current employer. What was important was not the careers of those individuals, but rather the long-term viability of the Team Sky project.

Initially that project was about landing a Briton on the top step of the Tour's podium within five years and bringing him home safely again. With Bradley Wiggins winning the race in 2012, it was mission accomplished and time to set new targets. And that new target is for Team Sky to become the most admired sports team in the world:

"This doesn't carry the risk of a win-at-all-costs mentality. "'What would the most admired sports team look like?' he [Brailsford] asks, leaping up, marker pen in hand, in the direction of the whiteboard. With Brailsford, there is always a whiteboard. 'We broke it down into different areas or aspects - being the best performing team; having the most engaged fans; and, given the [commercial] nature of this sport, having the most satisfied partners; but, most importantly, that we're recognised as being clean.'

Looking at mangers in times of crises is probably one of the best ways to judge whether or not they are any good and to gain some understanding of what it is about them that makes them any good. Moore's taking three crises - David Millar's 2004 EPO bust is the first, Victoria Pendleton's threat to walk away from it all a year ahead of the London Games the other - provides an opportunity to examine what it is about Brailsford that has enabled him to climb to the top and, once getting there, hold on.

If I were to offer one criticism of the format of Moore's examination, though, it would be that he doesn't spend a lot of time considering how the individual crises arose in the first place and whether or not Brailsford could have avoided them. Each was avoidable, they didn't just materialise out of thin air. Each arose through failures within the system that Brailsford has built up around himself.

Mastermind does cover a degree of ground that will be familiar to readers of Moore's Heroes, Villains and Velodromes and Sky's the Limit but does differentiate itself from those books and offer something new, being a lot more current than either of those two books can be and does - I think - tell us something new about Brailsford and what it is that makes him tick. Whether you love him or loathe him, if you're at all curious about Dave Brailsford Mastermind is well worth the read.