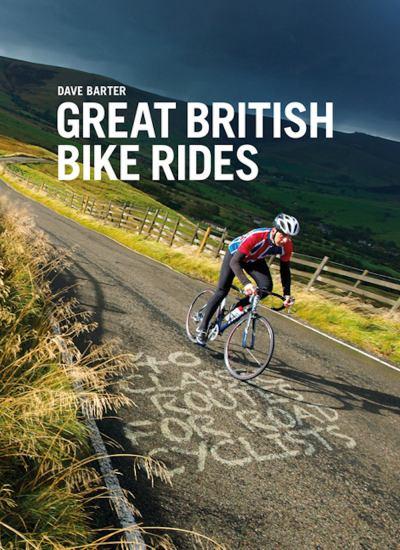 Title: Great British Bike Rides: 40 Classic Routes For Road Cyclists
Author: Dave Barter
Publisher: Vertabrae Publishing
Pages: 280
Year: 2013
Order: Vertebrate Publishing
What it is: A rider's guide to some of the best places to go cycling in Great Britain.
Strengths: Beautifully produced and covers a lot of ground in forty rides. Also, you can download GPX files for each route.
Weaknesses: As always with these guides there is room for debate what makes a great British bike ride.

In Britain, walkers have routes highlighted for them by the like of Alfred Wainright. As far back as the nineteenth century Hugh Munro was detailing Scottish mountains for people to climb. For rock climbers, there's a vast array of literature detailing classic faces to scale. What have cyclists got? That's a question that troubled Dave Barter - the author of Obsessive Compulsive Cycling Disorder - until he finally came up with the perfect solution: if the book he was looking for didn't exist then he'd just have to go off and write it himself. That book is Great British Bike Rides, a collection of forty suggested bike rides around Great Britain, each presented with accompanying maps, climb profiles and detailed directions.

Barter isn't claiming to have reinvented the wheel or to have finally settled the debate on where you should go and ride in Great Britain. What makes a great British bike ride is highly subjective. As with most guide books - particularly the mountains-related ones - if you know the terrain you'll doubtlessly spot gaps in the selection, or query the worth of some of the routes included. But that's part of what the Barter wants Great British Bike Rides to do:

"This book is not meant to be the definitive guide to road cycling in Great Britain. I wrote it to point the way firmly in the direction of where the good riding can be found. There's no way that forty loops can encompass all of the good stuff. That's for you to explore and discover for yourself. But hopefully with a few pointers from me you can know where to start, and by presenting this list the debate as to where the greatest ride is can properly begin."

For most of us, I guess we learned where to ride from people we rode with. Maybe it was your family taking you somewhere on weekends away. Maybe you've discovered where to ride from clubmates you've ridden with. Or - maybe - you've made your own discoveries by pouring over maps and experimenting. But with cycling on the upswing in the UK more and more people are coming to the sport who don't know here to ride: their parents didn't cycle, they may not want to ride with a club, they often just want to get out their on their own - or with their own circle of friends, also new to the sport - and discover it all anew. This is where a book like Great British Bike Rides comes in particularly handy. Certainly it is the type of book I could have done with having had access to when I moved to the UK and was looking for routes that would replicate rides I knew from back home in Ireland.

The routes chosen by Barter cover the length and breadth of Great Britain: 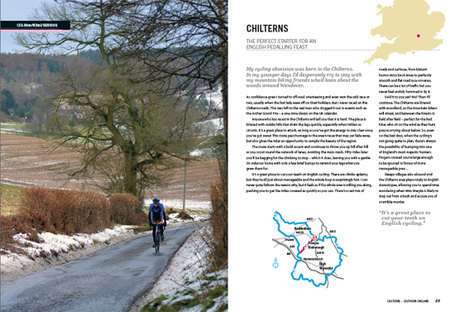 The rides detailed range in length from ninety kilometres up to one hundred eighty kilometres and with the typical ride in or around a hundred twenty-five kilometres, Great British Bike Rides serves up routes suitable to most tastes. The routes are all circular - starting and finishing in the same place - meaning those who want to shorten then can find shortcuts, by turning a section into an out-and-back ride or by finding a road that cuts across the middle of a loop and joins up with the end section. Or you could even turn a one day ride into a full weekend by stopping overnight along the way. The routes - while presented in detail - are like recipes in a cookbook, there for you to add your own twists and turns to. 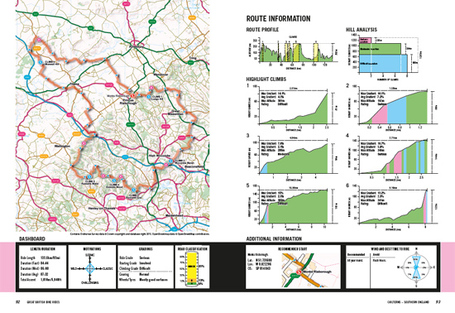 Each route is presented over six pages, with a photograph, a general description of the area and the route, followed by detailed directions. Finally, each route has a good, medium-scale map along with profiles of the overall route and individual climbs. Barter also provides some interesting "dashboard" data placing each ride in the context of the others, even providing information on general wind directions.

The best way to tell you what the book is like being to show you, Barter and his publishers have provided us with a downloadable chapter from the book, covering some of my old stomping grounds in the Chilterns out High Wycombe way. You can download that PDF here and see for yourself what's in store.

If you're based in the UK and are looking for ideas on where to ride - or are thinking of visiting and wonder what the riding is like - Great British Bike Rides has lot to offer in a beautifully presented and highly informative manner. And, as Barter hopes, I think it will add fuel to the debate of just where in Great Britain the really great rides are to be found.