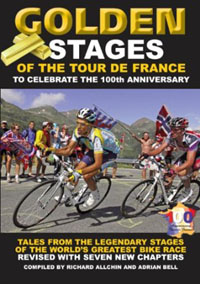 The basic idea behind Golden Stages is to take a single stage in a Tour and tell its story. Two dozen authors serve up twenty-seven stories between them, each ostensibly about individual stages but each really about the Tour itself. Each author uses the hook of a single stage to tell a broader story.

For some that story is just about that single stage (Marguerite Lazell serves up a tale about Laurent Jalabert's Bastille Day victory in 2001). For some the story is about the whole of that particular Tour (in one of Graeme Fife's two contributions he offers a story about the whole of the 1919 Tour). For some one stage in one Tour is the key to a whole career (Rik Vanwallegham talks about the 1971 Tour, using the Revel-Luchon stage - where Luis Ocaña bowed out on the Col de Menté - to tell the story of the days preceding it and how that Tour marked Merckx's mortality being realised).

There is no correct way to tell the story of the Tour, no single template that suits all. For each year there are as many tales to tale as there are riders and stages. You can even step behind the race itself and tell a different story (as Matt Rendell does when talking about the 1984 race and how the clash of personalities between Jacques Goddet and Félix Lévitan eventually produced a Tour in which Colombian riders were invited to race, and were able to win, as Herrara did on the Alpe in the stage Rendell is ostensibly writing about).

Having read rather a few Tour and Tour-related books over the last few months - see the 101 on Tour 100 books - the variety of voices on offer in Golden Stages is refreshing, a remarkable example of how, no matter how much you've read and how much you know, someone can always come along and give you something fresh and different.

The stories of loss and victory still grab me. Graeme Fife's second contribution, about Brian Robinson's stage win in Chalon-sur-Soâne in the 1959 Tour, is told wonderfully, especially the part where Antoine Blondin begs Robinson to stop before the finish and wait for the peloton to appear before crossing the line, so as to give Jean Robic a chance to avoid the cut-off that had almost KO'd the Briton earlier in the race. But the stories that most grabbed me in Golden Stages are the ones that are personal tales.

Of these there are four. Mike Breckon writes about visiting the 1957 Tour, John Wilcockson the 1963 race, John Deering 1996 and David Harmon about reporting the 2002 Tour. After a diet of so many race stories over the last few months it is these ones that view the race from the other side of the barriers that sing out loudest, for me, right now, given all I've read recently. As with Tim Hilton's One More Kilometre And We're In The Showers they tell a different, less often told story, and paint a different picture of the Tour, often a more colourful one.

Here, for instance, is Breckon, in Paris, the day before the final time trial:

"I saw all the sights and did all the things a tourist should do that day, losing myself in the Paris of Hemingway, returning to the hotel only to change before setting out again for the Left Bank and dinner at one of the unique Parisian restaurants of which I had read. I wandered along the Boulevard St Michel studying the menus. At La Coupole, on the Boulevard Montparnasse, I ate snails, and bifeck bleu (bloody and rare, as I knew racing cyclists ate their beef) together with frits and a green salad with oil and vinegar dressing, my favourite meal to this day. It was washed down with substantial carafes of vin rouge de la maison. I then adjourned to the Café de Flore on the nearby Boulevard St Germain for more café and a large cognac. I watched the world go by, feeling that I was at the very heart of civilization."

That tells you nothing about the race. But in a way it tells you lots about the magnetic attraction of the Tour.

Or consider John Wilcockson's first visit to the Tour, 1963, on a red and green 'Frederick' (built by Claude Butler frame-builder Fred Pratt) he'd inherited from his dad:

"With just a bike for transport (I didn't use any trains on that trip), it was sometimes a struggle to make my self-imposed rendezvous as I jumped ahead of the Tour every evening and then made early morning starts. I always tried to ride on roads parallel to the Tour route, and intercept it where I planned to watch that day. This was impossible in the mountains, of course, and on those days I would start extra early, as in the Pyrénées. Sometimes I would fall foul of an over-zealous gendarme, who would stop me riding on the course and force me to walk. That happened the day after the Grenoble stage, although I did find a 'bypass' to ride on - a steep, narrow back road that took me out of the Tour route part way up the Col de la Croix-de-Fer. So my one view of the race to Val d'Isère was only fifty kilometres into the 202-kilometre stage.

"Even so, I was able to see another side of the Tour, with Anquetil himself riding at the head of the peloton - not relying on any domestiques to set the tempo - on what was the steepest part of the Croix-de-Fer. (Twenty-three years later I would be driving a press car coming down this same stretch of road, with the speedometer touching 110 kilometres per hour, as we tried to keep up with the breakaway riders, Greg LeMond and Bernard Hinault, on the way to their famous one-two finish at l'Alpe d'Huez."

Wilcockson's previously mentioned other contribution (Armstrong) presented the editors of this collection - Richard Allchin and Adrian Bell - a dilemma faced by many Tour-book publishers this year: how do you solve the problem of the man who wasn't there? Originally published in 2003 - for the centenary Tour - Armstrong was then a hero (albeit one who, even then, many claimed had feet of clay). Now updated for the hundredth Tour - eight new tales have been added to the collection, only three of them covering post-2003 Tours - Allchin and Bell had to decide whether or not to exclude the Armstrong story following the USADA report which saw the Texan wiped from official Tour history.

It is perfectly possibly to air-brush Armstrong from the Tour's history, to send him to Coventry as it were and pretend he never happened. Me, I think that's the wrong way to tell the Tour's story. What happened happened and that is the story that must be told. Yes, you do have to reconsider the way the story is told but you don't excise the story. Armstrong is not the only rider to dope his way to victory, he's not the only rider to finally confess that he'd doped his way to victory. Bjarne Riis and Bernard Thévenet 'fessed up about their Tour victories, Jacques Anquetil and Fausto Coppi made no secret of their use of doping. Armstrong isn't even the first to have had his victories stripped. It happened to Floyd Landis. It's happened to Alberto Contador. And it happened - for a different reason - to Maurice Garin.

How we treat Garin's 1904 Tour is, for me, telling in how we will, eventually, come to see Armstrong's reign in the Tour. Today, when we write about the 1904 Tour, we don't pretend that Garin wasn't there, that he didn't win. We simply tell the story of what happened, how he won, and how and why his win was stripped from him. For some, Garin is still the moral victor in that Tour - a more worthy winner than the fifth-placed Henri Cornet - for others he's a man who got what was coming to him. We don't have to agree on which of these views is right. But I think most all of us agree that the story should be told, that Garin can't simply be ignored. In time that will also be the way the stories of the Tours between 1999 and 2006 are all told.

For this reason, whether I liked the Armstrong story or not - honestly, I am no fan of John Wilcockson and the manner he worshiped at the feet of Armstrong - I still think Allchin and Bell made the right decision in including the tale.

Overall, Golden Stages has been one of my most enjoyable reads in recent months, the two-dozen contributors between them serving up such a wide variety of Tour tales. The changes in style of story-telling - and the focus of the stories themselves - mean that the book is constantly surprising you with something new around the corner. It's a book that perfectly showcases the infinite variety in ways to tell the history of the Tour de France.