Share All sharing options for: Easy Rider, by Rob Hayles 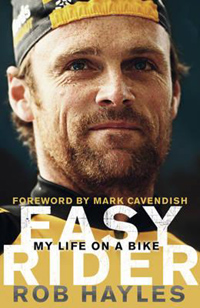 Title: Easy Rider - My Life on a Bike
Author: Rob Hayles (with Lionel Birnie)
Publisher: Bantam
Year: 2013
Pages: 276
Order: Random House
What it is: The autobiography of Rob Hayles
Strengths: Everybody loves Rob
Weaknesses: Hayles' story-telling is perhaps a little too laid back at times

Rob Hayles's Easy Rider - My Life on a Bike could just as easily have been called British Cycling and My Part In Its Rise, being as it as the autobiography of a man who joined the sport as a member of a British Cycling Federation that hadn't seen an Olympic gold medal in decades and left the sport as a member of British Cycling's medal factory. As well as telling his own story Hayles peppers Easy Rider with anecdotes about fellow BC alumni Chris Hoy, Bradley Wiggins, David Millar and Mark Cavendish.

The wealth of literature currently available about British Cycling is truly impressive. Each of those four riders just mentioned has already produced their own autobiographies, and you can add Victoria Pendleton's into the mix as another BC graduate. To these you could also add in those books which cover the change in British Cycling's fortunes over the last couple of decades, such Richard Moore's Heroes, Villains & Velodromes, Sky's the Limit and Mastermind, Edward Pickering's recent The Race Against Time and William Fotheringham's Racing Hard and his soon-to-be-published Project Rainbow. Add in the other forthcoming releases from Sean Yates and Chris Boardman and you've almost got enough books mentioning aspects of British cycling's revolution to fill a bibliography in an academic paper.

Hayles himself is only partly a product of the British Cycling medal factory. Some of what he's got is down to genetics. His father was a track cyclist who became a professional wrestler. He himself took up cycling as part of the BMX craze and graduated to track bikes when his legs were long enough to reach the pedals. Doug Dailey - British cycling's talent spotter extraordinaire - gave Hayles his first bout of international duty. Early on, Hayles learned some of the tricks of the trade from Tony Doyle, then the UK's best track rider.

Before the revolution the height of Hayles's ambition was to become an Olympian. He missed out on selection for Barcelona but four years later was riding the kilo and was a member of the team pursuit squad at Atlanta. That proved to be the watershed Games for British sport, the number of bangles and baubles brought home deemed a national embarrassment by the Conservative government and steps taken to see it never happened again, including the opening of the Lottery purse strings.

At the first post-revolution Games, Sydney 2000, Hayles rode the individual and team pursuits and the Madison, picking up silver and bronze shrapnel in the team pursuit and Madison, where he was paired with Wiggins. Rather than spend the next four years in Manchester waiting for Athens to roll round, Hayles followed Millar to Biarritz and got a ride with François Migraine's Cofidis squad, riding with them from 2001 through 2003. British Cycling weren't exactly pleased at this turn of events - for reasons not entirely clear - but Hayles was willing to take the risk that it wouldn't impact his chances of making the Athens squad.

These being the years of excess in the party-hearty lifestyle of Cofidis's vedettes Hayles had a ringside seat for the events that led up to the Cofidis affaire that ran throughout the first half of 2004 like a badly scripted soap opera. Early into his third year with the team Philippe Gaumont - one of Cofidis's enfants terribles - joked to him one day that if Hayles finished his career with just half the results he, Gaumont, had massed, he'd have had a very good career. Hayles shot back that if he'd done half the gear Gaumont had he'd have had twice the results. But apart from the Stilnox parties and Gaumont and the soigneur Madejak and one of his tame-mates, the rest of what was happening in Cofidis seems to have passed Hayles by. Until, shortly before the start of the 2004 Tour when Millar got busted and told Hayles he'd been using EPO.

Hayles got his arse handed to him in the races he rode for Cofidis and discovered that life outside of the Manchester velodrome was a lot less structured. As one of the lowest of lowly water carriers Cofidis changed his schedule at short notice, pulling him from races he was due to ride or calling him up when they were a man down. It was a rough existence. But, laid back guy that he is, Hayles just got on with getting on and sucked it all up without letting it get him down.

At Athens Hayles again rode the Madison and the two pursuits and again won bronze shrapnel in the team pursuit. The year after the Athens Games Hayles had his best results, picking up to rainbow jerseys at the World Championships, in the team pursuit and the Madison, the latter alongside Mark Cavendish.

After Cofidis Hayles moved back to the UK and supplemented his grant money as best he could. For 2008, with Beijing in the horizon, it was suggested to him that he move to Belgium and ride with the Landbouwkrediet squad, where British Cycling had paid the salaries of Steve Cummings, Paul Manning and Ed Clancy. Hayles was reluctant at first. The ride would see him have to surrender his personal sponsors, which for a married man with one kid was not an easy decision to make. He finally came round to the idea when it was made clear that it would be a factor in Olympic selection. At which point the goalposts were moved again. He was no longer going to have to go to Belgium. He and Tom Southam were now required to form a Halfords-sponsored team, part of the price for the car parts company sponsoring a women's team headed by Nicole Cooke.

Hayles's chances of selection for Beijing - and his last chance to go for gold - more ore less ended on the opening day of the 2008 World Track Championships in Manchester. The UCI blood testers turned up at the team hotel that first morning and Hayles was found to have a haematocrit 0.3 points above the 50% limit. The rules said that was unhealthy and he was benched. Just about everyone - including his wife and Dave Brailsford - asked him if he'd doped. He maintained his innocence.

Uncharacteristically, knowing where their riders' haematocrit levels were at and whether they were likely to cross the threshold if dehydrated was not one of the details Team GB paid attention to. Hayles didn't seem to have a naturally high haematocrit - it had never been an issue before and he didn't seek dispensation in case it happened again - and the best anyone could come up with by way of explanation was that trackies are different to roadies and their taper period drops their plasma levels without impacting haematocrit. All Hayles knows is that "British Cycling presented data to the UCI and at some point later that year the UCI dropped the 50% rule."

After his two weeks of gardening leave Hayles returned to the fold. And was promptly dropped from the Olympic squad. An international career that had begun in 1989 drew to a discrete close.

All told, Easy Rider is pretty much a run of the mill autobiography from a recently retired sportsman who's still making a living in the game, telling a little bit about the man, a little bit about the sport and dropping as many names and anecdotes into the mix as you can. Beyond the picture that emerges of Hayles - a laidback surface hiding a lot below - Easy Rider doesn't say much that hasn't already been said elsewhere. It is, in some ways, the upbeat version of Charly Wegelius's Domestique, stripped of introspection and offering a more cheerful account of a career in cycling.