Win The Dirtiest Race In History

To mark the launch of the paperback edition of Richard Moore's rather good The Dirtiest Race In History the Café Bookshelf has teamed up with the author to give you a chance to win a copy.

Share All sharing options for: Win The Dirtiest Race In History 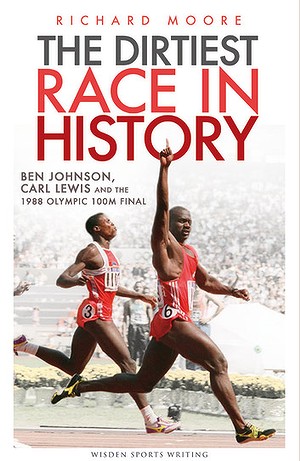 Richard Moore's The Dirtiest Race In History (Wisden, 2012, 334 pages) takes a trip back in time to the Seoul Olympics of 1988 to tell the story of the 100 metre sprint final on the athletics track. In an athletics version of Slaying The Badger Moore's story follows two of the stars of that race: Canada's Ben Johnson and the USA's Carl Lewis. But as with Slaying The Badger Moore's account is as much about the secondary characters as the primary.

Though a story about athletics, The Dirtiest Race is relevant to most sports - and especially relevant to cycling - in an era in which doping has become such a central story. How we look back on that sprint in Seoul twenty-five years ago may one day offer guidance on how we will look back at many of our own races throughout the era of Gen-EPO.

So whaddaya gotta do to win a copy of this book? Simple really. We want you to help us decide which of the following is cycling's dirtiest race in history:

1) The 1904 Tour de France, in which the winner and many of his competitors were disqualified six months after the race had ended;

2) The 1998 Tour de France, which started in Dublin and ended in discord as cycling's dirty little secret - EPO - became the only story in town; or

3) The 2007 Tour de France, in which a yellow-jerseyed Michael Rasmussen was forced to leave the race, Cofidis and Astana withdrew their whole squads following members of their teams popping positives and German broadcasters pulled the plug on race coverage.

There's no correct answer, all entrants will go in the hat and the first one drawn out will receive a copy of the book. Usual rules apply (the ones about judges' decisions being final and no revisiting of results at any point in the future). Competition closes 9.00 PM Monday (BST). Post your entries in the comments section below or Tweet them using the hashtag #WinTheDirtiestRaceInHistory. Winner will be announced here and on Twitter (@fmk_RoI).

If you don't happen to win a copy of the book, you can buy it here.