Once upon a time Sean Kelly held the record for the number of green jerseys won at the Tour de France. Four of them between 1982 and 1989. Then along came Erik Zabel with his six in a row. But now that Ete's admitted to having had a taste for the juice during those years authorities have to consider stripping him of his jerseys and thus making Kelly the record holder again. With Kelly as the record holder the authorities could at least sleep easy at night, knowing those are four jerseys that will stand the test of time. There was no juicing with our Sean. Oh no, not him. The nearest the man from Carrick-on-Suir ever got to doping was using a wee drop of cough medicine when he was feeling a bit chesty.

Share All sharing options for: Hunger, by Sean Kelly 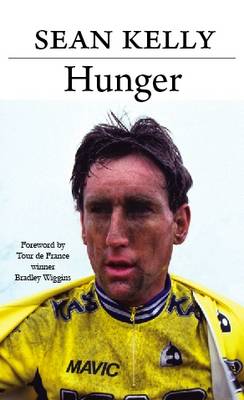 Title: Hunger - The Autobiography
Author: Sean Kelly (with Lionel Birnie, foreword by Bradley Wiggins, afterword by Robert Millar)
Publisher: Peloton Publishing
Year: 2013
Pages: 320
Order: Peloton Publishing
What it is: Sean Kelly's career in cycling.
Strengths: It's a book about Sean Kelly.
Weaknesses: It's a typically unforthcoming autobiography from a man famed for playing his cards close to his chest. And the many, many typos give it a slapdash feel.

That Sean Kelly doped has never actually bothered me a great deal. He learned his trade at a time when doping was a firmly established part of the metier and I'm more surprised by anybody who didn't partake in those days than I am by those who did. What bothers me with Kelly is that he also bought into another part of the game, the one which says don't frighten the children by telling them too much about how the game was really played. Which means that Kelly is incapable of openly discussing a subject as difficult as doping.

Some of this incapacity is easy enough to understand. Kelly makes a point toward the end of this long-awaited autobiography that is important to bear in mind:

"Cycling has given me a very good life and it offered my family security. I made some great friends and that, above all, is what I value: the sense of respect and friendship that we shared."

The level of respect Kelly earned is shown by those who attended the Christmas Hamper race in Carrick-on-Suir in 1994, the year he retired. Twenty-eight years earlier Jean de Gribaldy had flown into Dublin and driven down to Carrick to get Kelly to turn pro with him. When it was all over Bernard Hinault, Laurent Fignon, Claude Criquielion, Eddy Merckx, Briek Schotte and Roger de Vlaeminck were among those who made the same journey in order to bid adieu to the King of the Classics. Fignon apart those men have respected the peloton's sacred vow of silence. As does Kelly.

Another understanding of why Kelly stays silent on some aspects of cycling's dark reality comes early in Hunger, when Kelly was a kid in school. During a classroom tussle somebody's elbow got pushed through a window. The teacher's request for the guilty party to own up was met with silence so he convened a trial, in which the rest of the class would decide who the guilty party was. Each of the four suspected culprits defended himself. "I can remember choosing my words carefully," Kelly says, "to avoid incriminating myself." When the result came in Kelly was declared the culprit: "I felt that was unfair because four of us had been involved and we all should have taken the blame."

Collective responsibility is what is needed for cycling to truly confront its dark past. At the moment, though, all we are seeing is individual punishment. In time, the number of those who have explained what really happened in their time will outweigh those clinging to silence. Until then, it's not hard to understand why Kelly refuses to incriminate himself. He has a career with Eurosport to protect, and a development team that could be destroyed by a confession in the current climate of punishment.

Those looking to Hunger and hoping for the frankness of Fignon's We Were Young and Carefree will be sorely disappointed. "I'm not a great one for reflecting or reminiscing," Kelly notes, understatedly. Sadly this lack of reflection makes Hunger a pretty ordinary, by-the-numbers autobiography, Kelly mostly laying out the accepted - and acceptable - version of the legend. Which, give or take a little bit, puts Hunger on a par with most of the cycling autobiographies published in recent years.

Those are just the major victories. Lesser successes in Catalunya (1984 and 1986), the Basque Country (1984, 1986 and 1987) and the Nissan (1985, 1986, 1987 and 1991) also demand some space. Add in the times Kelly was forced out of the Vuelta (on the verge of victory) and the Tour, the World Championships he came close to winning, the times victory in the Ronde Van Vlaanderen eluded him and you've got a lot of ground to cover just looking at the races alone.

But Kelly's story needs more than just races. Jean de Gribaldy and Louis Knorr both helped to shape Kelly's career and both died during it. The death of his brother Joe is equally deserving of space. And then there's the two failed dope tests and the mystery of the Intralipid affair to be considered, as well as the deals done to help ease the path to victory or ameliorate the pain of a loss and, of course, Pat McQuaid and South Africa. Shoe-horning all of that into three hundred pages - and most of the above is crammed into Hunger, even if only in passing - well there's not the room to do all of that justice.

Although it's two decades and more since David Walsh's two books about Kelly appeared - Kelly and A Man For All Seasons - countless interviews have chronicled the high-points of Kelly's career. The familiar parts of his story are, well, pretty familiar at this stage. Which is perhaps why what I most wanted from Hunger was the unfamiliar. But Kelly's not much of a one for veering off a well travelled road.

Of Kelly's team-mates down through the years only Accacio da Silva gets any real space (almost all of it critical of his lack of work ethic). Ronny Onghena, who Kelly took with him when he left Splendor and stayed with him all through the De Gribaldy and Knorr years gets (I think - there's no index to verify this count against) one mention in passing, Martin Earley a couple or three mentions. Kelly does surprise in the way he talks of his relationship with Stephen Roche (there was more rivalry there than Roche has ever let on). And he is open (within limits) about the problems at PDM and later at Festina when the PDM riders got rolled into the mix. But, for the most part, Hunger dwells on the familiar.

The way the doping and the deals are dealt with, though, colours how you'll read Hunger, what you'll get out of it. If you know nothing at all about them then Hunger is a jolly romp through victories, defeats and a little bit of team politics. But if you know anything then you'll quickly realise how carefully Kelly chooses his words.

Of doping, Kelly does not deny it happened. He acknowledges that much of what Paul Kimmage wrote in A Rough Ride was true. But he presents himself as a man sinned against and not a sinner. Willy Voet is not a name you will find in the pages of Hunger. Nor will you find Voet's versions of Kelly's failed test at Paris-Brussels in 1984 or the reason he lost the yellow jersey in 1983. Voet said a switched urine sample was the cause of the former and a misjudged dose of cortisone the cause of the latter. In Kelly's version they were down to a botched test and a jour sans, nothing more.

Of the deals, Kelly acknowledges that favours were traded for favours. But the only time he mentions money changing hands was when the Giro di Lombardia needed an Italian winner and De Gribaldy was offered a tidy sum to help ease Gianbattista Baronchelli's path to victory in 1986. But what about the Italian Classic at the other end of that season, Milan-Sanremo, where Greg LeMond claims Kelly tried to buy him off before the sprint? Well that's not in the version Kelly recalls.

If you don't care about such things, if all you want is the legend of a legend, then Hunger feeds your needs. But if you're looking for a bit more in an autobiography you won't find it between the covers of this one.